Up close and personal with the graceful and effortless Aamina Sheikh and why ‘Cake’ is going to be one delicious treat! 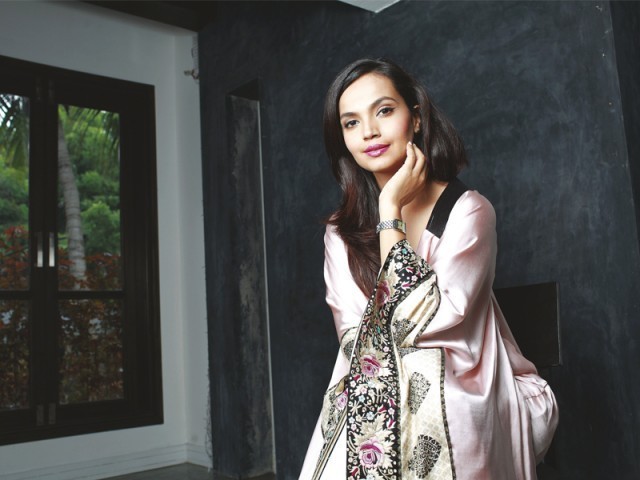 Actress Aamina Sheikh is set to grace the big screen with her dramatic role as Zareen in the upcoming drama film ‘Cake’, which is set to release this March. Her command on acting and dialogue delivery is impeccable! The depth of characters she portrays effortlessly on screen is unconventional for Pakistani dramas and films.

I chatted with Sheikh and talked about her upcoming film, how she juggles her personal and professional life, and her experience working on Miss Veet, Pakistan.

How did you venture into acting?

Throughout my academic career, I did theatre as an extracurricular. I was always involved in the arts and went to an undergraduate school to major in film. While pursuing film, you end up experiencing a bit of everything; aspects of filmmaking from script writing to acting, budgeting and production. Then I came back, started working in production and got an opportunity to act in a telefilm and some commercials.

You are known to be one of the finest actresses of our generation. How do you view this achievement?

It is very flattering to hear that (laughs). I never saw myself in that light but these are huge words for me. It makes me feel quite blessed that people think that way but I can’t let any of it get to my head because every day is a challenge. As an actor, you want to constantly challenge yourself.

I want to explore realms that I’ve never discovered before, so for me to undertake projects that I haven’t had a chance to do or prove myself in, would be an achievement for me. You just want to do better and as they say, you’re only good as your last performance. I hope people support me in every shade they see me in.

You were one of the three judges on Miss Veet last year, alongside Adnan Siddiqui and Hareem Farooq. How was your experience working on the show?

Working on Veet alongside Adnan and Hareem was an exceptionally fun and exciting experience. We get to travel with like-minded and easy-going people. We spent 20 days in Thailand this season and 20 days in Sri Lanka last season. Auditioning in Pakistan and having to shoot 13 main episodes is a completely different ball game. So both are very different approaches and tasks at hand, but I enjoyed every bit of it. It is a big responsibility to be a judge on the show especially when you are judging the contestants on various levels and giving your input.

Unfortunately, when it is edited and put on air, the show has to fit a certain duration and a lot of content is hence cut out. When I look at the show on television, it makes me feel a bit on the edge as so much content is omitted and you miss the depth of our selection process and the input we are providing to the contestants. But that is the nature of TV programming; a lot of value is lost through editing. They try to do their best and get the highlights of the show out there. So the process itself is fulfilling. I hope it comes through in some way or the other to the audience.

What makes Miss Veet one of the best projects is that you are actually giving back to the girls and having them realise their potential. It is incredibly amazing that we are given the opportunity to contribute even a percent of our expertise.

How do you manage to act so brilliantly in every film and drama? What aspects do you consider in preparing yourself for different roles?

I am constantly looking for something new when it comes to acting. I am dying to do a comedy right now. For me, the things I consider the most are ‘have I done it before?’, ‘yes, I haven’t done it before, I’d like to do it’, or ‘how meaningful are the dialogues and situations that this character is being put in’. I look at the little nuances and quirks of the character and the cast because a performance is about action and reaction. It is about bouncing off of another person’s energy and sharing that acting space with people for a long time.

If you were not an actress or model, which career option would you have chosen for yourself?

I think I would’ve done something which was an extension of the arts as I have a background in fine arts and a major in film. So I’d probably be doing something in production or perhaps interiors – something related to the arts.

As an actress and mother, how do you juggle your personal and professional life?

My daughter tags along with me everywhere (laughs). So even when I’m working, I try to create a situation that can facilitate her wherever I am. There is a small team that goes with me and it is a blessing, especially being a working person in Pakistan, that I am able to take her on sets, locations and heavy duty shoots. She is there with me. I don’t think this would be taken very well anywhere else in the world. Our industry is very accommodating. They are quite flexible in having me do or manage my life this way and still give my best to my child and my work.

What is the best and worst part of being a model/actress?

The best part about being an onscreen personality, an actress and model is the creative part of it. I really enjoy embodying a character which is not necessarily you. There is a team working with you to achieve the best performance whether it’s the lighting team, makeup team or director and producer. Basically, they are working towards facilitating a product in which you, as an actor, are being your best self and are giving your ultimate performance.

The worst part is the waiting period; waiting for things to happen, the camera to roll, the action time and having to wait for other actors to get their act together is a patience-building exercise. This is not a solo profession. Behind each person, there are a gazillion people working towards the same goal. When there are so many people and a whole team involved, you are dependent on each other. If one thing goes wrong, everything goes wrong!

You will star in this year’s new film titled Cake alongside Sanam Saeed and Adnan Malik. Describe your character profile and the premise of the film.

It is a story of a family. It is a genre which I haven’t seen in Pakistan, in its purest form, at least not while I’ve been working on the big screen. It is a very well put together piece of work. I read the script in one go and it was a page turner! That was the only reason why I gave it an instant yes. If I can flip through a script with so much interest, it has got to be a film worth watching!

My character’s name is Zareen who is an inspiring baker. She has a lot of layers, much like a cake itself. She is delicious yet she has many quirks and habits that kind of throw you off. She keeps a lot of things inside her. There are layers and complexities to her and she handles emotions peculiarly. The cast I’m working with are a good mix of actors. I think that the audience will be able to relate to each aspect of Cake. It is definitely going to be a delicious treat for everyone!

How is Cake different from mainstream Pakistani films?

I don’t think we have a set identity of a mainstream Pakistani film yet. It is too early. Every film that has come out has been of its own kind, and that is a good thing. Everyone is experimenting and figuring out what works in our market and what doesn’t. Cake is just another film which has a different take. Let’s see how the audience reacts to it.

Being a loyal fan, I haven’t seen you much in dramas lately. Are you working on any television projects?

I did dramas Khudgarz and Nibah which are both currently on air. So, now you’ll see me in drama serials as well! The last project I did was Pakeeza and the reason there was a gap in between was because all the scripts I was being offered were Pakeeza-related characters.

These two projects are different. My character in Khudgarz is Aira, who is a psychologist and ends up in a psychologically twisted situation herself. The second project, Nibah, is of a woman who takes up a challenge of marrying a guy who is much older than her, has lost his first wife to cancer and has three kids. He is marrying her to bring a mother to his children’s lives.

What are your thoughts on the current women’s rights situation in Pakistan?

Owing to social media and people vocalising a lot more than they used to, things are more on the forefront. If the rights are being exploited and misused, people are immediately caught. This issue has many pros and cons.

There is more accountability now, which is a pro. Owing to social media, so much noise is created that many issues lose their importance. Every issue becomes news for short period of time. It is not easy to get away with injustice nowadays, things are generally progressing.

What advice would you render to aspiring actors who want to take up acting as a career as I do myself?

Be in it for the long haul because this is the kind of profession that gets better with time, age and experience. It is easy to make short-sighted decisions. So my advice is, if you want to be an actor, take it slow and opt for one project at a time.

Also, don’t think that you have to make your way in quickly; decide whether you want to become an actor or an online sensation. Above all, figure out what your intention is; is your intention fame, money or the craft? The intention of an aspiring actor should be to understand the art of acting, probing its layers and nuances and making it a lifelong quest.

Being a fan myself, no one can work the silver or big screen as convincingly as Sheikh herself. Her way with words and charisma set her apart from the rest. I am excited and looking forward to watch her in her upcoming drama film Cake and wish her all the best for this movie and her future endeavours.