Pervez Musharraf claims he gave women their rights, but then mocks Bilawal Bhutto Zardari by calling him a “woman” 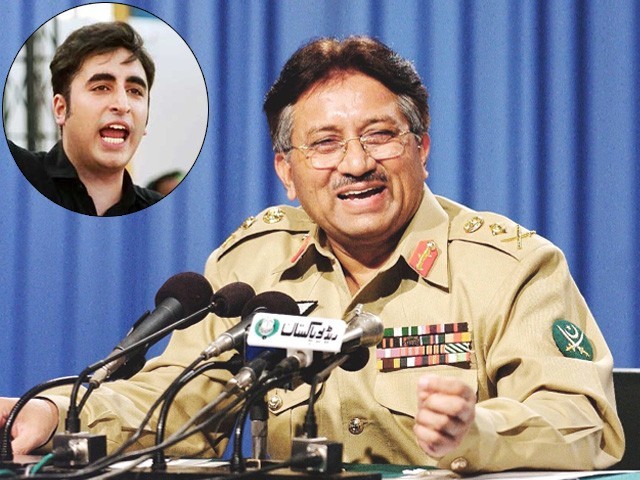 Then he tried to deflect criticism on his earlier remarks by claiming that he was actually equating Bilawal to a transgender person or a “middleman”.

(Bilawal is raising slogans like a woman. First he should become a man and then raise such slogans.)

These lines from the latest video from General (retired) Pervez Musharraf really hit me hard. As of late, I am becoming used to Musharraf sprouting nonsense, but this was very uncouth and ill-considered and below his usually extremely low standards. After all, Mr Musharraf, the former dictator and Pakistani “educated” urban middle class’s favorite political leader after Imran Khan, has lately been uttering all kind of embarrassing statements.

Just a few weeks back, Musharraf proudly stated how much he likes Hafiz Saeed and how much of a supporter he is of Lashkar-e-Taiba (LeT). In the process of declaring his admiration, he also inadvertently admitted that his so called “enlightened moderation” was nothing but a façade. In a recent interview, he also suggested that rogue elements within the state could be responsible for Benazir Bhutto’s murder, which was deeply embarrassing for the armed forces, who had to quickly give a response through the Inter-Services Public Relations (ISPR). He also suggested, in a recent interview, that Pakistan should assassinate “defectors” and “traitors” who are residing overseas.

All of the aforementioned examples show that despite being a former head of state, Musharraf is fully capable of giving thoughtless statements. But as mentioned before, this statement has even surpassed his earlier ones.

By mocking Bilawal Bhutto Zardari, Musharraf has simply shown his medieval and chauvinistic mindset, which unfortunately is also the collective mindset of our society. I have pointed out before too that in our society, generally, masculinity is considered superior and is equated to valour, bravery and aggressiveness while femininity is equated to docility, vulnerability and cowardice. Due to negative framing of femininity, one of the ways to ridicule our opponents is to simply equate his actions with that of a woman. Since politics is always a contested arena with plenty of opponents, therefore this kind of ridiculing becomes pervasive in politics.

On social media, I have constantly come across images that have been altered by supporters of certain political parties such that the leaders of the opposition are hinted at as being ‘women’. For example, pictures of Nawaz Sharif, dressed like a female, mostly shared by supporters of Pakistan Tehreek -e- Insaf (PTI), are extremely common on Twitter and Facebook.

Likewise, I have seen countless dubbings of Bilawal, which portray him as a woman or a transgender.

This is a sorry state of affairs because it shows that society on the whole thinks that the “best” way to humiliate a man is to call him a woman or a transgender. This attitude is the reflection of deep-rooted contempt for women in the society and shows that we really need to progress a lot with respect to the way we think about women and the transgender community.

One can argue that what Musharraf said is “normal” as this is the way our society thinks. However, while this misogynist attitude is reprehensible at the general level, it is even more disgusting when displayed by a former head of state who has always boasted of some kind of “enlightened moderation”.

Musharraf did not stop at merely mocking Bilawal as a woman. Later on, when pressed to explain his remarks, he went into a long winded response in which he boasted of giving women their rights and even took credit for the presence of women in the media. Then he tried to deflect criticism on his earlier remarks by claiming that he was actually equating Bilawal to a transgender person or a “middleman”.

In some ways, these subsequent remarks are even worse, for two reasons.

First, he tried to show that all the recent advancements in women’s liberation are only due to him, a highly condescending and patronising claim, which actually reinforces the image of women as helpless beings and trivialises the efforts of genuine feminists. Reema Omer, a prominent lawyer, in her tweet summed it up nicely.

P.S. Stop referring to women’s rights as charity. There are decades of struggle behind reform you won’t ever understand pic.twitter.com/J8WxDVRhgu

Second, these remarks also humiliate the transgender community and try to show that Bilawal, since he is somehow like them (according to Musharraf), therefore he is worthy of contempt. These remarks show that Musharraf is basically devoid of even basic empathy.

While Musharraf accuses Bilawal of cowardice or fragility, let me humbly remind him, that he is right now sitting abroad and refusing to face courts on the pretext of some mysterious backache. Even his bitterest rival Nawaz, despite his shortcomings, has faced courts and is still here even after disqualification and despite the fact that verdict against him in the National Accountability Bureau (NAB) reference may lead to imprisonment. While Musharraf accuses Bilawal of cowardice, he himself is afraid to come to Pakistan to face trial. I still remember the sight of the so called “commando” Musharraf fleeing from the court in 2013.

On the other hand, Bilawal, despite his youth has shown a lot of maturity and has bravely talked against extremism. Bilawal is in fact braver than Musharraf, who is cowardly sitting abroad and is also a self-confessed supporter of Saeed. In fact, increasingly, Musharraf is sounding like someone who is desperate for some kind of an audience. Nadeem Farooq Paracha summed Musharraf’s desperation well in the following tweet:

In his desperation to stay in the news, Mushy may even try to climb the Burj Khalifa in his underwear. Or at least claim that he wants to.

One can claim, and with some justification, that Bilawal was wrong to blame Musharraf as the murderer of his mother, in the way that he did during his speech. However, his opinion is shaped by the dubious circumstances in which Benazir was assassinated and also by the fact that there was apparently some sort of a cover up also. In addition, before her death, she had raised suspicion of foul play by Musharraf and in fact went to the extent of naming him as a murderer in case of her assassination.

Of course, this does not conclusively mean that Musharraf is the murderer and I think Bilawal should refrain from openly naming him as one. However, at the same time, it should be realised that there is a context which explains his accusations.

Musharraf should respond to him properly without resorting to sexist and misogynist statements.