Why I prefer to be cruel sometimes… 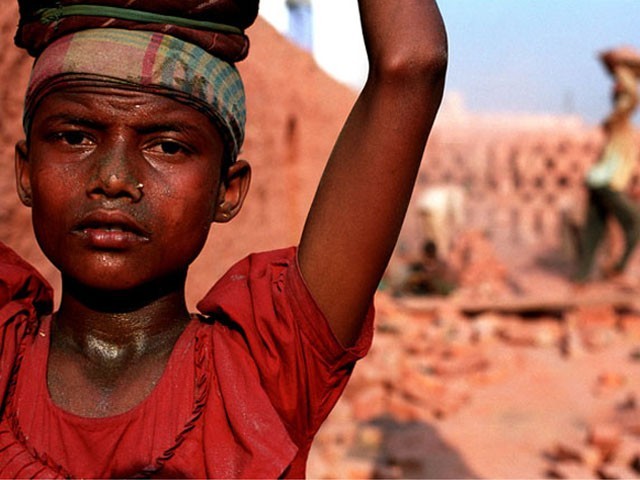 Should we spare change, or induce change by remaining stern?

So another International Children’s Day has passed and while it has been celebrated in some countries and some segments of ours, the state of children in Pakistan remains pathetic. Child labour – that persistent, malignant tumour unleashed upon our country during times of apparent prosperity — simply refuses to go away.

The media was flooded with much of the same institutional blame-game and vague identification of problems areas that we see regurgitated every year. Politicians are blaming natural disasters for the rampant child labour in their jurisdictions while the Ministry of Labour and Manpower is still deliberating the use of international aid to conduct further surveys on child labour. So while six-year-old maids are being beaten to death by employers for urinating on the floor, and entire rest houses are being run by underpaid, ‘horribly’ treated children, it  would appear that the government is still wondering if it’s really such a big deal.

Finding little hope in the government, we could learn from US aid strategists and turn to NGOs instead. The Society for the Protection of the Rights of the Child (SPARC) has demanded that the government ban domestic child labour. More specific child and labour organizations have been organizing seminars asking the media to do more in solving the problem. This brings us right back here, to this spot, to this opinion piece, one that criticizes the government and NGOs, asking them to take action. Such is the nature of this vicious circle all the major institutions are stuck in.

The role we play:

Let us attempt to depart this circle at a tangent, and examine what we, as common citizens can do to help eradicate child labour. First of all, we need to realise that child labour is a problem that needs to be solved. Researchers at the University of Karachi have concluded that “society has accepted child labour as a stable pillar of the economy”. There has never been significant decrease registered in the number of children involved in labour.

We are part of the problem, and every day, every time we go out on the street, or let employ a child in our homes, we influence the future of children in Pakistan. Affluent, Urban families who hire children for domestic chores offer justifications like “where will the poor kid go otherwise” and “at least we are putting a roof on his head and food in his stomach”. While this may seem charitable on the surface, let us see what is happening here. Most children working in Karachi earn between Rs2,000 and Rs3,000 a month, a fifth of whom children work more than 12 hours. Since food and boarding is often included in the terms of employment, this money goes directly to the consenting parents. So a poor family is earning around Rs2,000 per child. The more children they have, the more this figure is multiplied by. And then we wonder why our poor persist with countless children.

Employers often claim that they are providing their employed children with education and home tutoring. Yet Pakistan still ranks 27 out of 28 Asian countries in regard to literacy of this sector. Obviously all that alleged education is not working.

This means that the children we have ‘charitably’ employed in our homes will grow up and head families of similarly low income. They will want their children to earn for them the same way they did for their parents. A steady family profession has been established, which will repeat and multiply in each generation. Until and unless we remove this economic incentive for having more children, poverty and population control will remain elusive. By refusing to employ a child in your home, you can help solve the problem.

Now let us take a look at begging, because it has become a lucrative enough endeavor to be classified as a profession. We all complain about the increasing number of children begging on the street. We take pity on their condition, hand out a little spare change and drive off, blaming the government for lack of educational provision and the child’s parents for their ‘stupidity’. But what have we just done? By economically awarding the beggar, we have fueled the fire. On average, a donation of Rs20 is made to a begging child. This means that if 15 people ‘take pity’ on the child, he will have earned more in a day then a worker involved in hard labour from 7am to 5pm. Why should anyone continue to labour in the blistering heat or freezing cold? It is much easier (and thanks to us, more lucrative) to simply extend a hand and make a sorry face.  So the next time you fumble through your purse for loose change, wondering where all these beggars are coming from, pause to think, the answer might be right under your nose.

The number of children involved in labour has proven difficult to accurately identify. It could be anywhere between 10million and 19million. There are existing laws that dictate the terms of employment for children and others that could be used to stop child labour, but the wait for our government to implement these measures is proving to be an eternal one.

Meanwhile, our compassion continues to ensure that child labour continues. In current conditions, poorer families will have more children; it is the logical thing to do. Subsequently, more of these children will choose begging, it is the easier, more lucrative profession. These are not the Jahil (idiotic) decisions we too often dismiss them as. Our sympathy has made them otherwise.

We must change our approach. We must be cruel to be kind. Our future depends on it.