Pakistan should mind all of its languages! 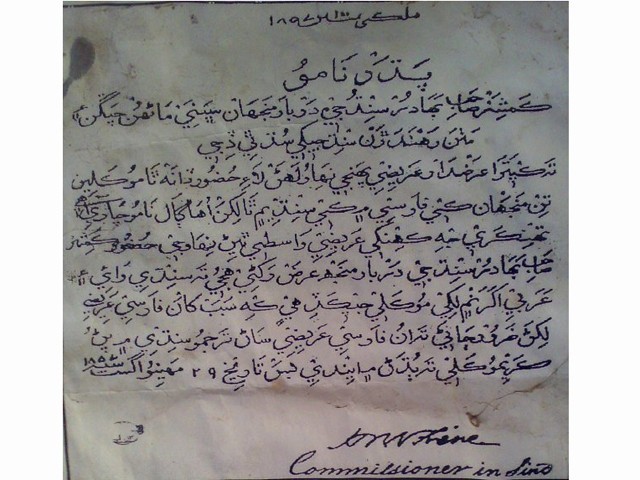 Scanned image of the official letter signed by a British commissioner in Sindh on August 29, 1857 declaring Sindhi as ‘official language’. It states that applications written in Persian would not be accepted, and, if anybody wants to submit it in Persian, a word-by-word Sindhi translation must also be attached with that to make it acceptable. SOURCE: THE SINDH TELEGRAPH

Pakistan is an unfortunate country which, instead of actually celebrating the invaluable diversity of its age-old culture and languages, has instead been suppressing every voice raised in its favor.

Although it is a question of simple ‘recognition’ of cultures which actually form the ‘federation’, this issue has always been dealt with purely on political grounds, not realising that this simple act of recognition (the government has nothing to show for ‘actively’ promoting its cultures) will add to the strength of the country.

It’s not diversity but uniformity which has been propagated through the state or the so-called ‘national media’ – notion of being ‘one’ nationhood has been propagated so much that the country has inappropriately been called a single nation. This concept has been propagated by the state and inculcated in the minds of the people to the extent that the real identities of the nations – Sindhi, Baloch, Pakhtoon, Seraiki, etcetera – have virtually evaporated, and the ones speaking for their separate identities are thought of as a threat to the country and, thus, should be ridded.

The problem is quite aggravated, especially in the case of the languages spoken by the people for centuries now. The languages, other than Urdu, and English, for that matter, have been made out to be something ‘alien’ for the country. Let alone promoting them at any level, these languages – Sindhi, Balochi, Pushto, Siraiki, Shina, etcetera – have been associated with the term ‘regional languages,’ as opposed to their historical status and importance.

The only language that does enjoy prestige is Urdu which, if we cast a quick glance at the history, is actually not a language that originally belongs to any of the current geographical territories of Pakistan that is Sindh, Balochistan, Punjab, or Khyber Pakhtunkhwa. Thus, Pakistan was made an exoglossic country.

Before partition, Sindhi, for example enjoyed the status of being lingua franca and the official and educational language of its land. Dr Tariq Rahman, the famous sociolinguist of Pakistan, supports this view and says:

“Sindhi is probably the oldest written language of Pakistan. Even when Persian was the official language of the Muslim rulers of Sindh, Sindhi was given more importance in the educational institutions of Sindh than the other languages of Pakistan were in the areas where they were spoken. From the 17th century onwards, a number of religious and other books were written in Sindhi and were probably part of the curricula of religious seminaries. It was the only indigenous Pakistani language which was taught officially by the British at various levels of education.”

After partition, Urdu, spoken by not more than 8 per cent of the total population as its mother tongue, was made the national language of the country, ignoring all other languages which were of great historical, cultural, social and literary importance. For example, Sindhi has been:

“spoken in the region of Sindh at the time of compilation of the Vedas (1500–1200 bce) or perhaps some centuries before that. Glimpses of that dialect can be seen to some extent in the literary language of the hymns of the Rigveda.” – Encyclopedia Britannica

This led to language riots across the country at different levels and at different times; the worst example is when the riots erupted in the then East Pakistan (now Bangladesh) in which the students of University of Dhaka participated more actively than the others, and demonstrated on the historical day of February 21, 1952. It was quite a tragic day in history when the police killed many of the student demonstrators which, later on, would be recognised as the International Mother Language Day by UNSECO.

The sad chapter of ‘language riots’ in Sindh is also a kind of a bad mark on the country’s history which took many precious lives over the issue.

However, in these times, when the situation is not that bad and when there are active segments of media covering every aspect of the governance and administration, the language issue can actually be discussed in the assemblies and necessary amendments made in the constitution’s article 251 National Language.

The article is as follows:

1. The National language of Pakistan is Urdu, and arrangements shall be made for its being used for official and other purposes within fifteen years from the commencing day.

2. Subject to clause (1), the English language may be used for official purposes until arrangements are made for its replacement by Urdu.

Linguists have always discussed the verbs used for the purpose which clearly show that it is only Urdu for which the ‘arrangements shall be made.’ As far as other languages are concerned, it is not the duty of the provincial assemblies to take special efforts for their progress – rather it has been stated that they ‘may’ take measures.

Fortunately, such a move was seen on the May 18, 2011, when Marvi Memon, an MNA from Pakistan Muslim League (Q), presented a bill which sought status of national languages for six other languages – Punjabi, Pashto, Sindhi, Balochi, Shina and Seraiki – alongside Urdu. But, as people like me would expect from our policy makers in a political backdrop as of Pakistan, it was flatly rejected by the majority. Although it was a question of the national language status for six languages, only two persons from among the present supported the bill: Marvi Memon (PML-Q) and Syed Zafar Ali Shah (PPP). Not only was the bill rejected, it was also termed as an ‘anti-Pakistan bill’ – not surprising for those who have had their eye on the history of Pakistan’s politics and languages.

The Resolution for a separate country in 1940 was first presented in the Sindh Assembly by Sain GM Syed and it resulted in the creation of Pakistan; the same assembly, ironically enough, cannot pass the bill to make its language national.

The problem is that any move for any language issue is thought of being a threat to Urdu language, the only one to enjoy the status of the national language, which is quite wrong. Awarding other languages the same status shall in no way risk Urdu – rather it would create a strong federation making the provinces trust each other which is lost, especially in the case of Punjab.

As a student of linguistics and familiar with the background and importance of the languages spoken within the territories of Pakistan, I would highly recommend that the said languages be given the status of national languages. This will satisfy the people speaking them respectively as their mother tongue and ensure that no conflict arises over the language issue in the future – lest another serious mishap is witnessed out of this not-so-hot right now but an always simmering topic!

Let’s not harm Urdu, but benefit other languages. Treating languages equally is like treating people equally. The country should think. And the politicians should decide – wisely!

A social development professional, journalist and freelance writer who studied English Literature and Linguistics. He is interested in Pakistan's socio-cultural and political issues and writes for GlobalVoices and his personal blog, møsaic, and tweets @aamirraz.

What’s wrong with ajraks on a national symbol?