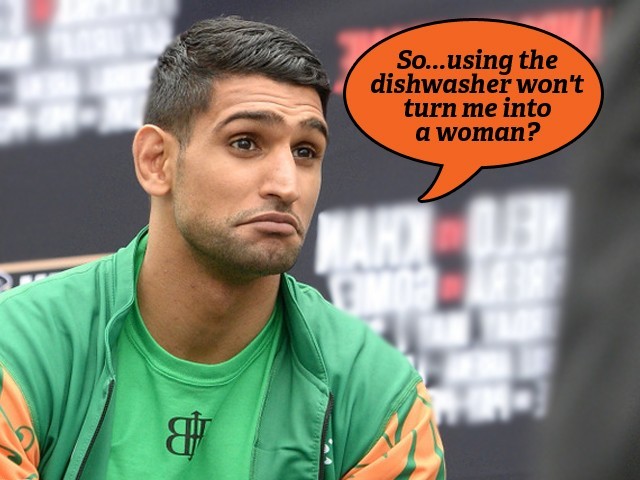 Amir Khan was trending yet again, this time for suggesting that cooking is only a woman’s job, and on his part, he always avoids doing household chores because of the fear of transforming into a woman.

Amir Khan, the world famous British boxer of Pakistani lineage, is no stranger to controversy. Although an extremely successful and talented boxer, most of the time, he is in the news for “other” reasons.

We witnessed a very public meltdown of his marriage, followed by the umpteenth reconciliation. We heard him bragging about being a celebrity and also public admissions regarding his infidelity, and of course the leaked sex tape, which merely confirmed his adulterous nature. He appears to be someone hungry for attention, be it of any kind, and I have a strong suspicion that many of his antics are deliberate gimmicks for ensuring that the media spotlight remains on him.

Although, I don’t take his public persona seriously, but since he is a celebrity, and a big one at that, thus unfortunately his words carry weight. Recently, he was trending yet again, this time for suggesting that cooking is only a woman’s job, and on his part, he always avoids doing household chores because of the fear of transforming into a woman.

Amir Khan admitted in the I'm a Celebrity jungle that he never really cooks at home because he has his sisters, wife and mum to do it. Our callers share their reactions to this pic.twitter.com/WK2cXiKB5B

These comments, coming from a person raised in Britain, and in this day and age, are simply shocking. It seems that his western upbringing, while making him somewhat openly sexually deviant, has not instilled in him real liberal values. The way he “fears” turning into a woman also underlines deeply imbedded contempt for the opposite gender, a truly sad state of affairs and ironic, given the fact that he is also desperate for their attention.

Khan’s comments are completely unforgiveable, given the context. Here is a global superstar, with massive following and someone whom millions around the world admire, talking like a male from medieval times.

He's a role model for some Asian men and brags about the fact that he has female relatives to cook for him! Drag him into this century!

One can still “defend” him on the pretext that this is actually the way things are and what he is saying is merely a “reality”. However, describing a problematic social reality – which of course needs to change – and actually endorsing it are two different things. What he has done is further propagate and justify a wrong social norm which is deeply entrenched in our society.

"In my culture, its the women's job to do the cooking". – Amir Khan proves that money can never buy class (or a brain): https://t.co/FNLEigYiVO

No, that isnt our culture – its a regressive mindset serving as a nauseating justification for men who cant take care of themselves.

This is not to say that in the western society things are completely different. Here, too, women still do much more household work than their male counterparts. For example, a study revealed that on average, a woman spends 26 hours a week doing household chores, whereas a man only spends 16 hours. In addition, most of the men do it half-heartedly, often forcing the women to completely take over some of the tasks.

However, compared to the past, things have improved a lot. From the time when cooking and cleaning were considered women’s responsibilities, these are now shared. Men may not be contributing exactly the same to household work, but they are definitely contributing more than earlier generations. Advent of feminism definitely created an impetus for social change, resulting in reducing, if not completely eliminating, the gender imbalance in professional as well as domestic lives.

However, this is sadly not the case in our society. One reason is that we have not actually witnessed a true social revolution the way the West has, and consequently, the structural imbalance between men and women remains. Further, the society’s expectations with respect to gender roles are so deeply entrenched that many men and women have actually internalised it.

Consequently, even in the case of working couples, it’s the woman who ends up doing an overwhelmingly greater amount of household chores than her male counterpart. This, of course, is grossly unfair for any working woman, as it has actually ended up doubling the amount of work she has to do. The worst case is of working mothers as they have to work in office, home and also take much greater part in raising children.

Why are these gender roles so entrenched that actual working women end up being the most disadvantaged? In the West, working women enjoy relatively greater help from men, though as mentioned earlier, imbalances exist there also.

I think one of the major reasons besides our upbringing – which regiments men and women into different roles – is also the social pressure and expectations. Ours is a society where a woman who does not do anything in the kitchen is called “irresponsible” and plain rude in case she is married. Men, as well as many women, indulge in shaming such a woman.  The social pressure on the woman to work in the kitchen becomes acute, even when hired help is available.

There’s absolutely no harm in a woman doing housework; as long as she is given the rightful respect deserved. But making ignorant statements about the intellect and potential of #women with regard to where they ‘belong’ surely stems from a #sexist inferiority complex.#AmirKhan

However, there is another dimension to the problem. If a man wants to help a woman in the kitchen or cook, he too is mocked by society. His masculinity is brought into question, as he is no longer considered a “real” man. Our society unfortunately frames masculinity in such terms according to which it is a complete antithesis of femininity. Furthermore, masculinity is considered superior and equated with toughness, aggression and bravery, while femininity is equated with docility, conformity and of course doing household chores.

Due to these different constructions of gender, men who do jobs traditionally done by women become objects of ridicule. In this context, Khan’s statement that he “fears” turning into a woman if he touches household equipment like the dishwasher, becomes understandable. Despite being raised in the West, his fears have originated from his immediate family which is a traditional Pakistani family.

On a personal note, I have been married for a considerable period of time. After moving to the US, I have done all the cooking! I enjoy cooking and have no qualms in serving my wife breakfast, lunch and dinner every single day. Although I am not good at cleaning, I do help her whenever she is cleaning.

Needless to say, I have often been mocked by some of my friends and their wives, particularly during my visits to Pakistan. Calling me henpecked has become a norm. Some women also throw subtle jibes at my wife for being lazy and for “mistreating’ me. In fact, when we are in Pakistan, my wife often has to request me not to enter the kitchen as she will also be bearing the brunt of all those jibes.

Since we are now in the US, all these jibes and mocking statements do not affect me that much, but I think they would start affecting me if we move back to Pakistan.

What Khan said is nothing but a reflection of our society’s attitude towards gender roles. Unless these attitudes are changed, nothing will change. Economic independence alone is not going to win women a better deal in life, it has to be supplemented by a change in attitudes as well.