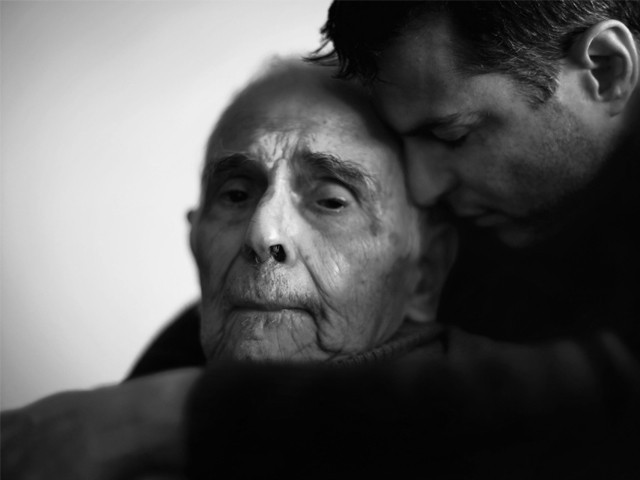 Photographer Phillip Toledano hugs his father in a photo from his book, "Days With My Father". PHOTO: PHILLIP TOLEDANO/FLAKPHOTO

As you know, dad had a massive stroke a few months ago. The stroke was like Hurricane Harvey in several respects – it occurred around the same time as Harvey, and like the hurricane, was of unexpected intensity and left devastation in its wake.

Those who read (perhaps enjoy) my rambling (writing), including you, might recall the piece I wrote about dad and his health issues, dementia per se, last year.

I received flak for writing about dad – in fact, one person came very close to calling it a sacrilegious act of airing one’s dirty laundry. Then there were others, like most of you, who called the writing a courageous act. I thought I was just writing to clear my head, and since it helped me do so, I decided to share it.

Little did I know then that dad was rapidly hurtling towards a stroke, or vice versa. The night before the stroke, he was quite functional; walking around, asking for a kebab sandwich and his small red pills (the wretched lexotanil). The next morning, he was found collapsed on his bedroom floor, unable to talk, his left side completely paralysed. A stroke is like that; it doesn’t necessarily announce itself nor asks for permission prior to entering your house.

What followed were a harrowing four days in the special care unit (SCU) of the hospital, during which it was unclear if dad was going to pull through. Although he seemed asleep through most of that critical phase, it was quite a hard time for the family.

Yoda, as you are aware, I work in the medical profession, so I get to deal with the worst (clinical) case scenarios of others aplenty. However, when your own loved one is traversing a similar path, it is an experience that takes a life of its own. The outcomes for dad and for my family were far from clear, but I had to decide upon his code status. The Do Not Resuscitate (DNR) form is an amusing document at times because it is like a Chinese drop-down menu with varying degrees of (agreed upon) resuscitation that the patient’s family can choose from.

The DNR form is meant to guide the medical team in escalating or de-escalating care if the patient deteriorates further. The bottom line is that the decision being taken essentially is whether one lets the patient live or die. Any further discussion on how to decide upon ‘life versus death’ in such a scenario will be beyond the scope of this blog and is best not delved into at this stage.

I was asked by the medical team what I wanted my dad’s code status to be on the DNR form. The night I had to sign dad’s DNR form is etched into my memory forever. It was a surreal night spent in the hospital where I grew up, first as a student, then as a faculty member. Now, in the same hospital, I was the son at his father’s bedside, deciding upon his fate.

After deciding dad’s code status as DNR, and signing that document, I was quite unsure if I had done the right thing. It was then that the writing came to my rescue. I used the notes application on my cell phone to pen my conflicted thoughts. Through that exercise, I finally managed to process my own emotions (albeit on ‘paper’) about what had happened to dad, and to speculate upon what to expect in the future – for him and for the rest of my family.

To work through my angst, I listed the following questions:

“I hope your dad gets better soon.”

But what does ‘getting better’ for my 87-year-old dad, with dementia and now a stroke, really mean?

– Some people tell me,

“You should be glad you moved back to Karachi when you did; there must have been a higher purpose – to serve your elderly father.”

Why am I unable to see a ‘higher purpose’ in the current predicament, especially after four-and-a-half years of relocation?

– How much time does dad really have? What would dad want to do with that time? Would dad even care for any of that time? (Assuming he pulls through and goes home on full rehabilitation/ physiotherapy)

– Would dad recognise the people surrounding him as family, once he is home?

– How will he communicate with us? With his on-going dementia, he wasn’t much of a communicator, so how will the post-stroke phase roll out where his communication skills are concerned, or lack thereof?

– How do I let dad go easily and not feel guilty for doing so?

Not having adequate answers for the presumably rhetorical questions, I decided to reach out to the universe and asked her for Yoda – well, my version of Yoda. Once you appeared, I asked you to answer the aforementioned questions; answers that I hoped would help me achieve closure. You gave me several insightful answers, but it was the answer to the question below, that I would like to emphasise today:

‘Assuming dad pulls through and has the mental faculties to understand what DNR means, would he approve that I signed his code status as DNR?’

“The sick, these decisions don’t affect. If anything, them to be rid of their pain, it enables. The living much more, the decisions affect. Hence, closure with whatever decision one makes, one must find. With you, may the force be!”

(These decisions don’t affect the sick. If anything, it enables them to be rid of their pain. The decisions affect the living much more. Hence, one must find closure with whatever decision one makes. May the force be with you!)

Needless to say, your wisdom, although initially hard to fathom and practice, came in quite handy for me to just move on. I stood firm and did not revert the DNR. Truth be told, I am glad I never had to exercise that DNR.

Dad did pull through that critical post-stroke phase. Although he continued to have a bumpy ride over the remaining course of his hospital stay, there was no further deterioration in his condition. He improved enough that we were able to take him home, albeit on 24/7 home nursing support.

Full recuperation and recovery is a slow process; I don’t even know what ‘full’ implies in dad’s case. Regardless, removal of a feeding tube and urinary catheter, ability to verbally articulate hunger or pain, and so on, have become meaningful and relevant targets for him, and for us, to achieve. We keep at it, as does dad.

Pray for him, Yoda.