Pakistan is my home, but it is not a country for my disabled daughter 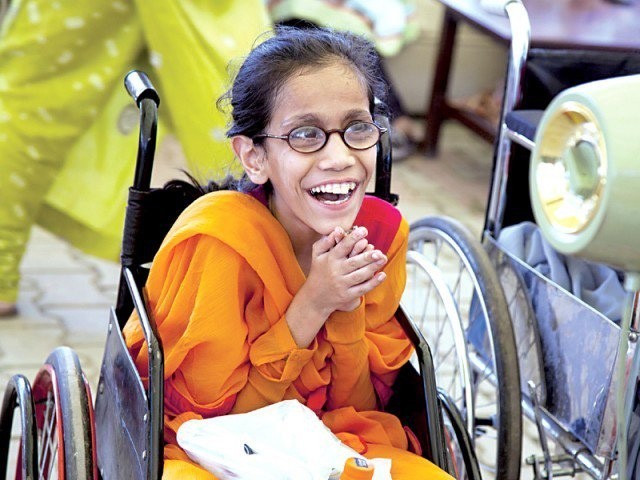 A young girl enthralled by a performance during a festival organised by the Special Education and Social Welfare Division, in collaboration with Plan Pakistan.PHOTO: MYRA IQBAL

Four years ago, our seemingly normal world changed forever. Our fairy tale family, which included an older son and a younger daughter, was shattered into pieces when our little girl was struck by Herpes Encephalitis, a devastating illness that leaves very few, if any, without disabilities.

This is our journey, not written to gather sympathy or to criticise, but to try and bring the much-needed awareness to the needs of those who are not as able-bodied as you and I.

Ameera, our daughter, was 17-months-old when she caught what looked like a nasty version of the common cold. When my bottle-loving child went off her bottle and started vomiting, I knew something was up. A massive seizure led to a week of hospitalisation and two more seizures, yet nothing conclusive was found. It was only when we brought her home and she started seizing again that we realised this was not just any virus.

We rushed to the Aga Khan University Hospital (AKUH) and eventually, Encephalitis was diagnosed, and treatment started. The regret of not having taken her to AKUH immediately is something my family lives with to this day – but hindsight is perfect vision.

Unfortunately for our little girl, by the time her illness was caught, it had eaten away half her brain. There was only so much that could be done here. We were very fortunate to be able to whisk her on an air ambulance to London, where we eventually ended up spending over a year and a half.

I will never forget the moments leading up to me getting on that plane. Our families were all at the hospital as we boarded the waiting ambulance. My last memory is of my younger sister leaning into my mother’s arms in tears as the ambulance drove off. My heart could not be heavier that day. Not only was I indefinitely leaving my “normal” to go into the unknown, I was also leaving my barely four-year-old son behind. How do you explain to a child that your mother just whizzed off on a plane with your sister and left you behind?

However, Allah works in mysterious ways. That journey into the unknown turned out to be a blessing in so many ways. While I still consider it to be the toughest period of our lives, I am also immensely grateful for it. I came out of it empowered with so much knowledge that I doubt I would ever be able to have that had we stayed on in Pakistan.

As a parent to a child with special needs, I can say that this life is literally thrown at you. There is no instruction manual to prepare you for the journey. But to be surrounded by individuals who give you confidence and treat you as an equal is a godsend, and I only wish we had more of those in our country.

We spent three months in the hospital on arrival in the UK, undergoing all sorts of tests, procedures and treatments. To say I felt overwhelmed would be an understatement, but I had the help of nurses who made us feel at home, doctors who took the time to actually sit down and hold my hand reassuringly, and an entire healthcare system, which though not devoid of shortcomings, helped pave the way for me going forward.

These people became my road map. Physiotherapists made house calls. Equipment needed for Ameera was all provided, free of cost. Speech therapy was in conjunction with occupational therapy, done so to minimise the burden on me and my time. Her medical feed was delivered to our doorstep every month like clockwork. Based on Ameera’s needs, we were entitled to 10 hours of free care in the week, meant to give me, her primary caregiver, some respite. The caregivers who came in were not nurses, yet they were equally competent. They were trained in whatever the child needed, whether it be dispensing medication, seizure protocol or simply playing with the child. I could leave her with them safe with the knowledge that she was in good hands.

When she got a bit older, a nursery was arranged for her, again meant to give me respite and Ameera some exposure to other children her age. Therapy sessions were then conducted there and I was sent the day’s report. There was even a pick and drop service, once again with a warden who knew exactly what all the children on the bus needed.

Life fell into a routine and I was content that my daughter was getting the best possible interventions. What I came to appreciate the most was the holistic approach to Ameera’s care, focusing not just on the child but also on the well-being of the entire family, and the little things they did which went a long way. For instance, giving a sticker after every hospital visit, a cab driver not charging you when they see your child is unwell, or just simply talking to the child as if he/she’s an equal.

Ultimately, however, it was time to return to Pakistan and to try and rebuild our life as a family. Much as I love this country, and have always maintained that this is home, I came to realise very quickly that this is not a country for the disabled.

In the UK, everyone worked as a team, one person building on the other’s work. In Pakistan, however, it was very different. Politics, it would seem, were everywhere. Doctors are seen as gods, their decisions are not to be questioned. Rather than seeing the child as an innocent being, most therapists see him/her as only a tool. Therapy is seen as “work” here, where they want to just get it done with as compared to therapy abroad which felt like “play” because of how the therapists interacted with the child.

Many institutions are run by students, with minimum supervision from seniors. Equipment is not available, and what little can be sourced locally is based on a “one size fits all” model. Be it a school, hospital or rehab centre – they are all understaffed and over booked. And the schools, there are quite a few around, with the exception of one (AURA) which is sadly too far away, but none of them were equipped to deal with Ameera’s needs and I appreciated the fact that they were honest enough to tell me that.

So, I was left with a child who, although very disabled and fully dependant, was still a child at heart and who had zero interaction with other children her age. Other than the few odd birthdays, and the therapy sessions which made me feel like I was running on a treadmill to nowhere, there really were not that many places I could take her. This proved very frustrating to say the least.

Imagine a life for yourself where you could not go to school because there was no school for you or a hospital where you couldn’t use the washroom because there wasn’t one for you. Imagine being restricted to your home because your parents are poor, they do not have transport and there is no way to take you around in your bulky wheelchair? Imagine not having a wheelchair when you never learned to walk. Unthinkable isn’t it? But this is the sad reality for many, myself included.

However, this need not be the case, once we realise that there is a part of our population that can add so much value to this rapidly growing nation, if given a chance. Increase the job quota for those with disabilities and set up more vocational training centres for the poor. It is our responsibility to make them feel as useful members of the society. Basic therapy centres with trained physiotherapists can be set up in villages so that parents don’t need to travel far and wide. Send your best therapists to centres abroad for training, but with incentives to return.

Hospitals, offices, shopping malls, even hotels must have toilets for people with disabilities, with easy access. Therapy centres need to be regulated to make sure they are wheelchair accessible. Special schools need to widen their scope; after all, you cannot fit any two special children into the same box.

Most of all, and perhaps most important, teach empathy; a smile, a friendly voice or even just an understanding look goes a long way. It is only once we realise the potential of those we do not acknowledge, that a world of possibilities will open.

Not too long ago, my dream was to be a world-class paediatrician. Today, my dream is to make life easier for those who do not have the resources that my daughter has. It is up to parents like us, who have the means, to find ways to make an easier road map for those who are lost on this very long, difficult journey. It is up to us to make people realise these children are not pariahs.  It may take a while for the state to wake up to this, but we can try and build an easier path one story at a time.

A mother of two who dreamed of being a paediatrician.