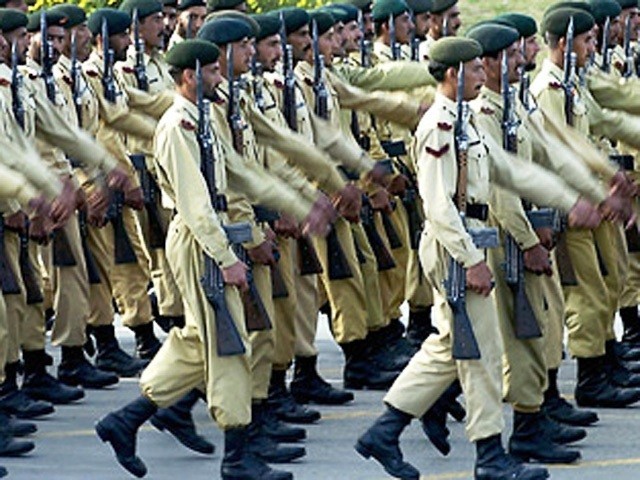 The only reason the Pakistan army has successfully held its own country hostage to its needs up till now is because of the army’s unity and organised structure.

Recently, there was a public demonstration in support of the Pakistan army outside the Presidential Palace. There were more banners in support of the Inter-Services Intelligence (ISI) and the army than there were demonstrators. Ironically, all the banners were exact lookalikes. There was a desperate need for show of some public support for the military after US Navy Seals violated Pakistan’s sovereignty undetected, to hunt down Osama bin Laden. This demonstration didn’t change much.

Pakistan received a small, handicapped army after the partition of India in 1947. The civilian population, keeping the best interest of the country in mind, massively sacrificed and nourished the army to the best of its ability. With endless resources, at the cost of good civilian living standards, the army grew comfortably over the decades. Up to 70 per cent of the budget was initially allotted to the armed forces because of the defense needs of the newly born state of Pakistan. Later, the defense budget continued to rise with great advancements in nuclear and missile technologies. The idea was to establish a solid defense for the country and then move to other economic and social developments once the so-called nuclear deterrence was in place. Turns out, there is no such thing as nuclear deterrence. Instead, the result was an arrogant, business-oriented organisation that misused the trust of the civilians and stabbed the very nation which fed it selflessly.

The sacred institutions of the Pakistan military are going through a rough patch. Often labeled as the most organised institution in the country, the Pakistan army has always treated civilian politicians like pets and puppets. They often create and manipulate the political leadership, which is not able to resist the offense because of their shady, corrupt backgrounds. Of course, the army only creates politicians out of the lazy, immoral ones who can easily be blackmailed. The worst of the worst miraculously bag innumerable votes and represent the so-called democracy that exists. The civilian leadership has its graph at its lowest, with nothing to lose. But the proud armed forces are finding it increasingly hard to stand tall and justify the huge investments they have been snatching from the budget.

The recent operation by the US Navy Seals to eliminate Osama bin Laden was a PR wreck for the armed forces. The situation was such that the army was forced to plead incompetence in front of a parliament of what they usually refer to as ‘bloody civilians.’ That was a hard pill to swallow, but it was either that or the acceptance that Osama bin Laden was a guest of the military. The latter would have angered the masters of the masters. Hence, after accepting the fault, the ISI chief offered his resignation to Prime Minister Yousuf Raza Gilani. The prime minister said nothing. Furthermore, the prime minister even lobbied against an independent inquiry commission to investigate what had happened. In other words, the army would decide if the army was at fault.

On May 23, 2011, four to six militants entered a naval base in Karachi and gave a fight for 17 long hours, during which they destroyed at least two US made surveillance aircrafts worth at least $60 million. The militants also managed to kill 10 security personnel during this adventurous act of revenge for the killing of Osama bin Laden. Chief of the Pakistan Navy, Admiral Nauman Bashir, jumped into the scene with a statement saying:

“This attack could not be termed as security lapse.”

This gentleman was surprisingly given charge of the investigation into the matter by the prime minister.

The time is ripe to restructure the Pakistan army. Endless resources being poured into the defense of Pakistan are corroding the foundations of the country. Osama bin Laden being found near the most prestigious military academy may not represent the official policy of the forces, but they clearly show that certain elements of the army were involved. At the same time, an attack like the one on the Navy base in Karachi is not possible without one or more insiders. These elements need to be exposed to the Pakistani public and the world at large.

The organization needs to cut down on its business roots and extra activities to streamline the defense of the country. Large military owned enterprises divert the attention from the real risks at hand. An army, formed and trained to counter India, is finding it increasingly difficult to face the militants that lie within the country. Term extensions awarded to the army chief and ISI chief are internally rotting the system with growing enmity among senior officers. The only reason the Pakistan army has successfully held its own country hostage to its needs up till now is because of the army’s unity and organised structure. As this structure crumbles, the whole country’s fate is at stake.

HEC devolved at the altar of politics