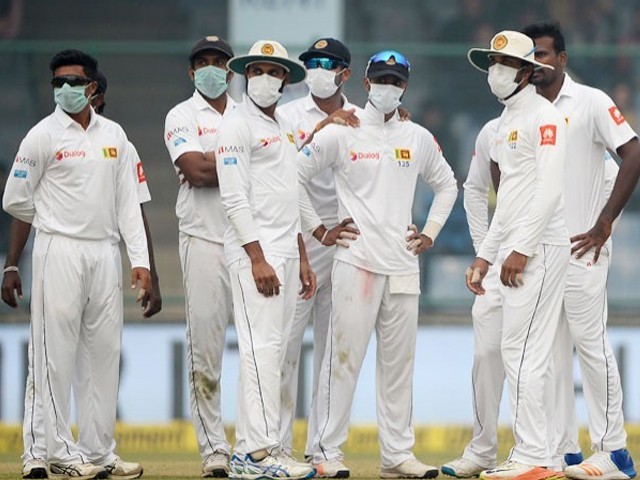 Sri Lanka cricket players wear masks in an attempt to protect themselves from air pollution during the second day of the third Test cricket match between India and Sri Lanka at the Feroz Shah Kotla Cricket Stadium in New Delhi on December 3, 2017. PHOTO: AFP

On April 22, 1998, India were playing against the mighty Australia at the Sharjah Cricket Stadium. The little master, Sachin Tendulkar, had by then become synonymous with Indian cricket. The Aussies set a target of 285 in a must-win game for India to reach the final of the triangular series.

The men in blue were surging ahead, with Tendulkar at the crease. The score was 143/4, when a sandstorm struck the city. Ravi Shastri, former Indian all-rounder and a commentator at that match, exclaimed in surprise,

“We have seen rain stop play. We have seen bad light stop play,” adding that he hadn’t seen a sandstorm stop play in a very long time.

After a brief halt, Tendulkar went on to score a memorable century in that game. Many still refer to those innings as the “sandstorm hundred” or “Sachin’s sandstorm”. India lost the game but reached the final, wherein another century by the little champion brought the Coca-Cola Cup home.

Almost two decades after “Sachin’s sandstorm”, one of the modern greats and the Indian team captain, Virat Kohli, was at the crease on the second day of the third and final test between India and Sri Lanka in New Delhi’s Feroze Shah Kotla Stadium. It was a Sunday, and close to 20,000 people were watching their “Dilli ka ladka” hitting the Sri Lankan bowlers all over the park.

Another first in international cricket occurred that day. Delhi had previously seen rain, fog, and even a misguided driver who drove his Wagon R on to the pitch, stop play.  But this past Sunday was different. This time it was the smog, a recurrent Delhi phenomenon nowadays, that made life difficult for the players on the field. Sri Lankan players were seen wheezing and visibly struggling to breathe, and took to the field with masks on for the post-lunch session.

Lahiru Gamage, flanked by the support staff, hopped off the pitch, while some other players were seen vomiting on the ground. It turned so precarious for the Lankans that they had just 10 players remaining on the field after running out of substitutes too, due to breathing problems.

Delhi’s killer haze, which forced Arvind Kejriwal’s government to shut down schools last month, was once again taking a huge toll on players.  The national capital faces acute problems during the months of November and December, with air pollution levels reaching alarming levels.

The stubble burning in the territorially contiguous states of Uttar Pradesh, Haryana and Punjab, heralds the onset of Delhi’s hazardous winter. The National Green Tribunal (NGT), India’s apex court on matters concerning the environment, had last month criticised the Delhi government for failing to take action to curb air pollution. The admonishment sent the chief minister and his entourage scurrying for answers.

The issue, appallingly, reached heights of ignominy when the Delhi chief minister was seen interacting with his Punjab counterpart, Amarinder Singh, on Twitter, about the deadly smog that continued consuming the city. Singh was seen wishing away the hazard, often chastising the BJP government at the centre for doing nothing.

The doctors in the national capital had declared an emergency last month as the pollution levels spiked 40 times the World Health Organisation’s (WHO) safe limits, tantamount to smoking 50 cigarettes in a day.

“Ideally, sporting events should not be scheduled in the winter months in Delhi. We cannot expose our athletes to inhuman levels of pollution just because a few hundred crores (tens of millions of dollars) is at stake.”

He also added a stronger warning on the dangers of pollution,

“Pollution kills you slowly. Whatever toxins levels we are exposed to today, suppose it continued for 10 days, this would have shortened the life of each one of us by several days or several weeks. But that effect will be noticed many, many years later, so it’s not an immediate killer.”

At this juncture, when the governments of three states had been at an impasse for months, a Test cricket match, the most demanding form of cricket, was perhaps a recipe for disaster.

Indian fans, cricket experts, and even those 20,000-odd people present at the ground, groaned after Sri Lankan cricketers expressed their concerns. Some mocked them, others accused them of “melodrama”, talking about awarding them Oscars for their acting. Some experts, unperturbed, perhaps even blindsided by India’s incredible run in the international cricket over the past few years, thrust aside health concerns.

Hi, Your players are using a surgical mask which's ineffective against the PM 2.5 particle pollution. If you're serious, we'll send you 11 Dettol Sitishield N95 masks (98% protection against PM2.5) so that there's no reason to stop the game, and delay India's series win ;)

Last winter, two Ranji Trophy matches had to be called off due to acute smog, showing that this is not a new phenomenon. A year later, however, when Sri Lanka complained under similar circumstances, people on social media hounded them and showed an utter disregard for the cricketers.

The whataboutery around the matter reflects the superficiality of those who were, not long ago, complaining over pollution levels. The fact that the fans were watching the match without masks or that the opening batsmen didn’t cover their faces while batting doesn’t, in any manner, mitigate the toxicity of the weather or delegitimise the suffering of the Lankan side, who were entitled to not play under such hazardous circumstances.

After this match, the NGT once again launched into a tirade against the Delhi government over its ill-preparedness and criticised the authorities for holding a Test match in such challenging circumstances. The court had earlier asked the government of Delhi and its adjoining states to submit an action plan to tackle the issue of pollution. However, the order was not implemented, and may not have even come up for discussion, had Sri Lanka not complained.

On the fourth day of the third Test, India posed a mammoth target of 410 runs for Sri Lanka to pull off a miracle. Kohli and the boys will, in all likelihood, lift the winners’ cup. However, the die is cast.

The incident has blighted Delhi’s prospects of hosting an international match during this part of the year in the near future.

This picture speaks of #Delhi Pollution Problem. In future, cricket team will refuse to play in Delhi owing to pollution level in air. #DelhiinSmog #IndVsSL https://t.co/cUdCp9iWCd

The BJP-led central government has shown little interest, despite the Supreme Court of India seeking its response to stubble burning. More importantly, neither the lack of preparedness and determination to look for a permanent solution, nor the continuous political mudslinging between Delhi and adjoining states, is going to bring fresh air to the national capital anytime soon, dimming the future of winter cricket in the country.