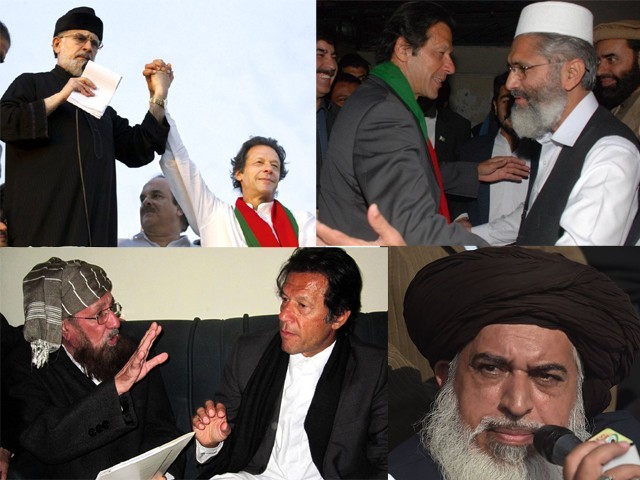 With Imran Khan’s inability to challenge the status quo and his continued alliance with right-wing parties, more and more moderates are becoming disillusioned.

These days, it seems like you simply cannot keep Imran Khan out of the attack for too long. It feels as if he is always ready to run forward and bowl that match-winning 92 World Cup spell, yet sometimes, it also seems like all of his deliveries are targeting a batsman who is already back in the pavilion. Regardless of where his deliveries are pitched, he seems to be getting a good amount of support on the other end.

It is believed that Imran always bowled better in partnerships, but today, the same cannot be said about his political alliances.

On the contrary, the game of politics hasn’t been as easy as cricket for Imran to dominate, but with time, he is, along with his party Pakistan Tehreek-e-Insaf (PTI), learning the tricks of the trade. Among those tricks is the ability to form partnerships and alliances with like-minded groups/parties in order to achieve a common goal.

In the aftermath of the chaotic protests seen at Faizabad, and Imran’s willingness to side with Tehreek-e-Labbaik, let’s take a look at some of his (bearded) partnerships in the world of politics.

It can be argued that JI was PTI’s first love.

Until a few years ago, the joke was that the main difference between PTI and JI was that PTI was comprised of men who were slightly better looking than the ones in JI.

Flash forward a few years, and PTI and JI are coalition partners in Khyber-Pakhtunkhwa (K-P). They exchange harsh words from time to time, and sometimes even throw in the odd threat, but at the core, this relationship is as strong as any in today’s Pakistani politics.

Since entering a coalition in K-P, PTI and JI have fielded joint candidates and entered electoral alliances in numerous by-elections, ranging from NA122 in Lahore to the local body elections in Karachi.

Who can forget the strong bond between the PTI chief and PAT chief, after both spent dozens of nights together, cheering crowds in the open Islamabad sky during the legendary dharna of 2014? Following the 2013 election, Imran was convinced that mass rigging had taken place, and just when it looked like he was about to take a solo fight to Islamabad, Qadri came along.

Despite his shady and unreliable past, PTI entered into an alliance with Qadri’s PAT to organise two concurrent marches to Islamabad and stage a dharna. The Canada-based religious cleric continued to incite his followers for a ‘revolution’ to overthrow the government, the kind of narrative that incited violence and led to an attack at the PTV headquarters.

This revolution was paused when Qadri decided to catch a flight back to Canada. However, now that he has returned and is calling for a protest against the government after the Model Town report, Imran has once again assured him of his party’s complete support.

The adoration between PTI and Maulana Sami started during a fine summer evening of 2016 when the PTI government slipped in Rs300 million to Sami’s ultra-radical madrassa, Darul Uloom Haqqania.

At the time, PTI childishly claimed that this was part of some random giveaway to reform conservative madrassas in the province. But now with the veil fully removed, Imran declared that Maulana Sami shares the same intellectual and ideological values as himself, paving way for the JUI-S to formally announce a country wide electoral alliance with PTI, citing ideological harmony as the main reason.

Forming an alliance with the founder of one of the most extreme madrassa’s in the world should have sent shock waves across the country, but in today’s political climate, it’s treated just like another day at work.

Imran’s politics in the last few years has viciously revolved around one core concept – topple Nawaz Sharif’s government and somehow replace him as the country’s leader. Hence, his blatant support for the anarchist who took the entire country hostage over the Khatm-e-Nabuwat clause is not surprising, given that Imran has virtually thrown his weight behind everything and everyone that is in opposition to the current government.

His love for the angry TLYR members is not mutual, as Khadim Hussain Rizvi has hurled obscenities at Imran in the past. However, when the country stood at crossroads with thousands of violent men pushing the boundaries of Pakistan’s Constitution, Imran decided to stick to his game and openly joined the anarchists in their demands, fanning the flame of chaos and destruction.

TLYR is not currently PTI’s ally in a traditional sense. They are no agreements in place, no documents signed together and certainly no electoral seat adjustments, but PTI does not seem to have an ideological quarrel with the party. Prominent members of PTI have come forward and expressed solidarity with the demands of TYLR and with Imran’s approval of TYLR’s tactics, the door of future cooperation has been cast wide open.

In Imran’s fight for a ‘Naya Pakistan’, one can only hope that the trend of befriending extreme right-wing parties ends soon. PTI was once looked up to by many progressives as a potential game changer, however, with Imran’s inability to challenge the status quo and his continued alliance with right-wing parties, more and more moderates are becoming disillusioned.

PTI’s image as change bearers, as a party capable of actually bringing tabdeeli (change), has already been greatly tarnished. For the sake of the party and the future of the country, one hopes that for once, Imran Khan will stand up to the bullies instead of siding with them.