It took me 15 long years to quit smoking, and today, it’s been 16 months since my last drag 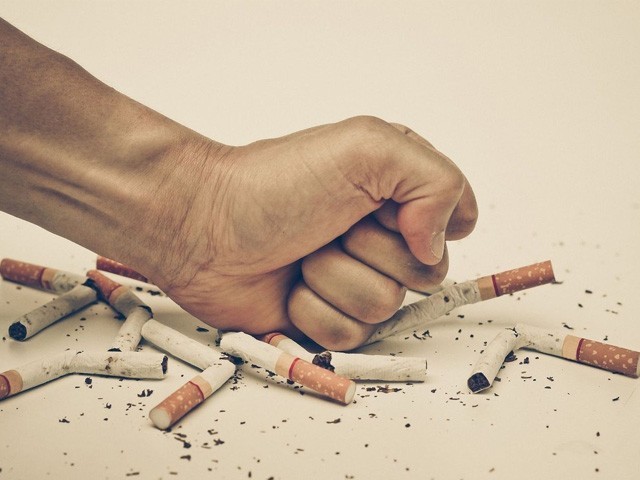 I cannot remember exactly how many serious attempts I made to quit but I think a safe estimate would be more than 20 times in the last 15 years. PHOTO: SHUTTERSTOCK

I am writing this for all those people, including my friends, who are fighting a similar fight in their lives, and I will use my own story to let them know that it is possible to win that fight. My struggle to quit smoking since 15 years, where I failed a dozen times, has finally bore fruit, because it has been more than 16 months since I last smoked. It is truly a big deal for me, and I’m sharing my personal example so that people know that even though smoking is probably the hardest habit to break, but if I can do it, you can do it too. If you want to quit, you will quit, you just have to do two things – keep trying and do not stop trying.

As I have mentioned that I have been trying to quit since at least 15 years, you could say I have been a motivated quitter. I used to go smoke-free from two days to six months but would always end up having that “one drag” and would jump right back into this habit every single time. This became so frequent that my family stopped taking my quitting efforts seriously because I would never persevere.

Every time, two to three days after the initiation of my quitting attempt, I would start to struggle and get those sharp and unbearable urges for just one drag. I’d fight for some hours and would eventually give in to the urge. This would lead me to secretly going to the store, buying one pack, taking a cigarette out, sitting somewhere comfortable, lighting it up and getting high on nicotine. I would throw the rest of the pack out of guilt and would promise myself that I’d never buy a pack and smoke again. But I broke my promise every single time and bought another pack the next day.

Despite several failed attempts, I kept myself committed in my mind and never stopped trying. I cannot remember exactly how many serious attempts I made to quit but I think a safe estimate would be more than 20 times in the last 15 years.

I tried everything; nicotine gums, patches, Champix, tapering down the smokes per day, books and so on. Saying that these did not work would be wrong. I consider all of them my bits of effort that I put in all these years that enabled me to reach to the conclusion where I finally understood that I can only quit if I’m resolute in the real sense.

It is all about how strong your resolve is. Dig deeper and try to answer if you really want to quit. If the answer you give to yourself is a true 100% uncontaminated yes, then that’s when you will quit and you will quit for good. All of it is in your head. It is really simple, make a promise to yourself and keep it.

When trying to quit, keep envisioning how you’d feel as a non-smoker. Think of fresh, non-smoking, nice smelling mornings, fresh breath all the time, no morning coughs, and feeling energetic and active most times of the day. Think about being able to smell the real smell of delicious food, colognes, perfumes, being able to enjoy food twice as much compared to a smoker, and most of all, having an optimum physical and mental performance overall. Think about the freedom of not having to go out intermittently during the day, standing outside and smoking like a slave to your addiction, with or without the company of other addicts. For me, I am experiencing all of the above and more.

It is your life and if you are choosing to continue to smoke, despite knowing all the hazards and downsides, if it still makes you happy and proud that you are a smoker, then continue to smoke, because at the end of the day, it is your decision. However, be open-minded and wait to see if something in your life changes that may affect how you feel about your habit later on.

For me, I think fear drove me to quit all these years. Fear of finding out that I have some kind of smoking-related irreversible disease and it being too late to quit then. Witnessing people suffer (including my own father) around me due to smoking-related sickness, only added to that fear. I have always been unhappy of my habit, and I knew that I have tried all kind of support including medication, rehabilitation and so on. I just woke up one day with extreme self-resentment of not being strong enough to do something which I had always wanted to do. That day, I just made a promise that I am still keeping.

There are certain things that helped me quit smoking and I’m listing them down for anyone who’d want to know. You need to find what works for you and motivates you in this internal fight.

1) Tapering down smoking from 20 to 10 to five to post-meals to post-dinner to none. This could take you weeks, even months but this is definitely softer on you than trying to go abruptly from chain-smoking to quitting smoking.

2) Physical exercise, walk or run, whatever works for you. This definitely reduces the urge.

3) Increase water intake. Keep a water bottle with you at all times.

5) The most difficult bit – avoid friends who smoke. In my case, all my friends smoke and I had to stay away from them for at least two months. I realise that it is extreme but it did help.

6) Avoid caffeine; this is a major nicotine urge trigger. Replace it with something else.

7) I used to go out for a 10-minute walk during work (even during 45 degrees in the afternoons) whenever I felt like smoking.

I smoked my first cigarette in 11th grade with a classmate and a close friend in a park near our college. Great times they were. But I’m sure if I turn back the clock now and I have the opportunity to meet my friend during the lecture break and we go to the same park, I’d take a different approach. Rather than choosing “Salem Menthols” to bond over, I’d just prefer my friend’s company and a few good laughs and I am sure he will do the same.

The author is born and brought up in Karachi but based in Dubai since 2010. He works as a marketer in an FMCG company in the middle east. He is a music junkie and an ex-smoker. He tweets @syedmansoorh (twitter.com/syedmansoorh)