This was no usual pain – this was a pain of loss 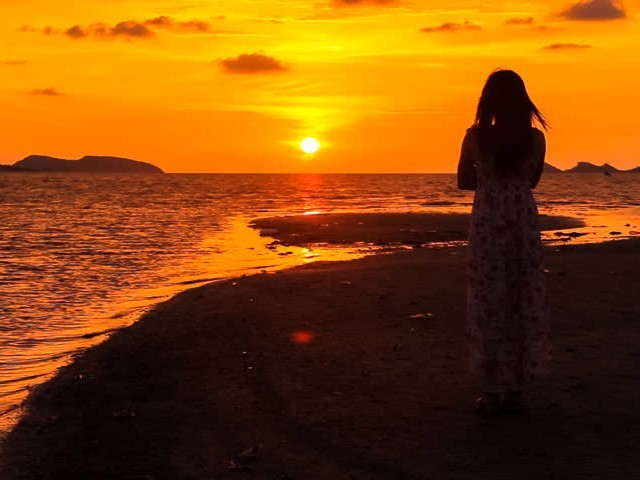 She didn’t know she’d be so madly in love with someone. PHOTO: SHUTTERSTOCK

Emily rose in the pale blue light of dawn, and went into the balcony. She leaned against the wall and gazed at the sky as it further lightened above her. This was her favourite time of the day, when after the dark, colours would slowly and timidly creep back into the world. But even as she stood looking at the sky, her eyes brimmed with tears and her body rippled with pain. This was no usual pain. This was a pain of loss, and nothing could assuage it.

Emily’s eyes twinkled with excitement as she looked at herself in the mirror. Today was the first day of living her dream, of studying at Harvard. She had waited for this day for so long, and now that it was finally here, her excitement knew no bounds.

She let her chestnut hair pour down her back in waves, put on a striking pink lipstick and donned her newest dress, the hemline of which fell just below her knees. A little show of her freshly shaved legs wasn’t going to hurt. She wanted to look her best for today, and her image in the mirror told her, it was so.

As a little girl, she’d dreamed of this day and now as a big girl it was finally time to live it. It was the beginning of a new journey, but Emily knew little of how different this journey was going to be from what her doe-black eyes envisaged at the moment. It was going to be very different.

It was at the university that Emily met Saif. He was a Muslim and from Pakistan. Despite coming from different religious backgrounds, and having different nationalities, Emily and Saif shared the same ambition. They both wanted to become competent doctors, and help humanity. Their ambition brought them closer together.

Emily grew increasingly fond of Saif, and before she knew it, she was in love with him. His nationality, religion, background – nothing made any difference to her. He was appealing to her, just as she was to him. And one night, under the star strewn sky, she told him she wanted to marry him. Saif, in answer, broke into a huge smile, and it wasn’t just a perfunctory curling of the lips, but a warm, toothy grin. Emily instantly knew it meant a ‘yes’.

Emily and Saif graduated from medical school and got married. Both of their parents were least supportive of their marriage but the two of them didn’t care. They had to live together, not their parents.

The first few years of the marriage went by happily, but then Saif decided to return to his parents’ home in Pakistan. He told Emily they could work in Pakistan too. They might not be able to earn as much as they were earning here, but that still didn’t mean they couldn’t live a happy life. He assured her it was for the best that they returned, and he did it so convincingly that whatever little hesitation Emily felt at first dissipated, and she agreed to go with him.

The first prickling of excitement and nervousness coursed through Emily’s body as they landed at the Lahore airport.

“I am very happy to be finally meeting your family, Saif,” said Emily.

To Emily’s consternation, the welcome wasn’t quite how she had expected it to be. No one greeted her or talked to her. It felt as if Saif had returned alone. But Emily knew she’d settle in, eventually. Even Saif told her so.

Days passed but things at home didn’t get better. In fact, they got worse. Saif’s parents insisted that Emily changed her name to “Maliha” because they didn’t like calling her Emily. Emily was reluctant but she acquiesced. If changing her name meant she could make a place for herself in Saif’s household, she was perfectly willing to give it a try.

In the ensuing days, Saif and Emily started looking for work. Within a few days, they got job offers from Lahore’s best hospitals. They both started out on their new jobs but only a few days had passed when Saif told Emily he didn’t want her to work. She raised her voice in protest, but he pronounced his decision with finality in his voice. Emily’s face dissolved in tears upon being told she couldn’t go to work. She hadn’t worked so hard for nothing. But she still gave in to Saif’s decision. She loved him more than anything else in the whole world, and if he wanted her to give up on her job, she was fine with it. It wasn’t too much to make small compromises for people most dear to you.

Emily had adjusted to the new setting of her life. She had never thought that one day she would give up on so much for someone – her home, her ambition, her identity, her whole life. She didn’t know she’d be so madly in love with someone.

The final blow that she got was when he told her he was going to marry his cousin, Rema. The words slipped out so easily from his mouth that for an instant, she almost thought it was a lie. But it wasn’t. Emily’s world came crashing down on her. She could’ve lost everything, but not the person she loved the most. She could’ve given up on anything, but never on Saif.

She settled back into the life she had left behind, but everything felt meaningless. Her clear bright eyes that once looked like they wanted to swallow up the world were now only pools of sorrow. She had won back everything, but lost the love most precious to her.

Now, everyday as she watched colours fill in the ashen morning sky, her eyes brimmed with tears and her body rippled with pain. This was no usual pain. This was a pain of loss, and nothing could assuage it.