NY’s reaction to Osama’s death: The other side of extremism 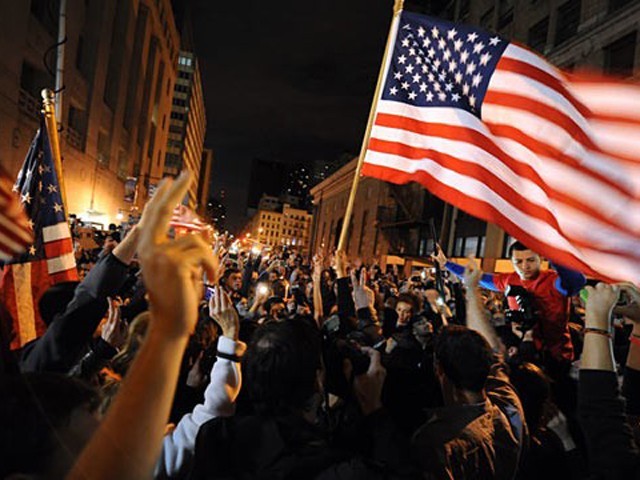 It’s difficult to talk without the invective, without the bitterness, when you have been truly wronged.

Growing up in Lahore, the monsoon was my favourite season – those muggy, motionless afternoons when the air suddenly exploded into a river of orange rumbling down from the sky, leaving jungles in its wake.

In the Bay Area, every balmy day of the year was beautiful except for the miserable characterless spluttering they called “rain.”

In Ithaca, my favourite season was Autumn – a fire dance in the sky, bold and blazing, curling flames at your feet.

And, in New York, it has to be spring, the teenage of nature, blooming poetry from every stem, every lilting branch a breathtaking ballet of pink and white to melt the numbest of hearts.

On such a blossomy New York morning recently, my colleague Ryan and I were at Ground Zero, jostling through hundreds of New Yorkers and out-of-towners to catch a glimpse of President Obama as he arrived to lay a wreath at the September 11th Memorial Site, giving symbolic “closure” to the victims and families of the 9/11 attacks following Osama bin Laden’s death.

We didn’t see him, not even a fluttering hand through a darkened car window. But Obama became irrelevant once we actually started talking to people and recording their reactions to the news.

The reactions were predictable.

One African-American woman beamed with pride that Obama had been in office “to do this urgent and important duty”.

A man who had lost four friends in 9/11 said he felt a sense of “relief” and “joy” beyond words.

A young Latino-American who had recently joined the New York National Guard said that Osama’s death was a source of “unity” for the people of New York, that it showed “how Americans come, in all shapes and forms, whatever nationality you are, whatever colour you are, you come as one.”

But what was unpredictable was these people’s – these ordinary, middle-class, tax-paying people’s – calm acceptance of the fact that yes, this “war” was “not going to end with the death of one person,” and, more disturbingly, that it needed to go on, that it should go on. In the words of one 67-year old ex-Marine, “we have to be there in all of these countries to assist… so we can crush these people when they come in to try and hurt us. It’s not over.”

While Ryan asked the questions and I filmed behind the camera, I thought about the questions I would have liked to ask these people:

But do you know the real victims of your country’s fallacious war?

Do you know who actually pays the price?

What do you have to say to the families of the tens of thousands of innocent men, women and children killed in Afghanistan, in Iraq, in Pakistan because of this war?

Were their lives less valuable than the 3,000 Americans who died here 10 years ago?

Do you not see that what you’re calling ‘patriotism’ and ‘duty’ is decimating entire societies, entire nations as we speak?

I said nothing of the sort. I was a journalist, and Pakistani on top of that, and the last thing I wanted to do in that sort of crowd was get into an argument.

Turned out, somebody else was there to do it for me – a lanky, bespectacled and very articulate white dude by the name of Sander Hicks, founder of the Truth Party, a grassroots political group that believes in exposing, among other things, that 9/11 was a hoax. Wearing a black T-shirt with the words “9/11 Is A  [email protected]#$%^& Lie!” emblazoned on the front,  Hicks shouted maniacally but fearlessly to the crowd:

“Why am I here? Am I here to celebrate and validate a murder? Without a trial, without due process? Or am I here to think about what is really happening in our country? Do we justify war and torture based on 10 years of lies? I say no! And I don’t care if there’s a million people here saying I’m an [email protected]#$%^&, just for standing up for peace and truth!”

I’m still surprised that he got away with saying that, and a lot more, without even a scratch, though there were several jingos in the crowd who would’ve liked nothing better than give the provocative Hicks a square punch in the jaw. But shouting back curses was about as far as they let their anger go.

Then, in the middle of the fray, a red-faced, white-moustached little man broke in.  Wearing a black leather jacket covered in Vietnam insignia, he cried in a thick Texan drawl:

“You know what I would’ve done if I were president when 9/11 happened? I would’ve nuked the entire Middle East, starting with Mecca!”

So far that day, I had been watching and listening to everybody almost in the third person, a perfectly neutral body. But at those words, I felt my heart plummet like it would at a vertical drop on a Seven Flags rollercoaster, and a row of goosebumps shot up my spine as if I were suddenly caught in an Arctic gale wearing a T-shirt.  I looked up from the camera. My eyes stung; I thought I was going to cry.

It was pure reflex. Something essential and sacrosanct, seeded deep in my soul, had been momentarily convulsed, and at that moment I could’ve clawed out the old geezer’s eyes.

There was a collective gasp from the crowd, and people were quick to admonish:

“Not all Muslims are bad!”

Clearly, the guy was a loony, and it would’ve been stupid to take anything he said seriously. But his words stayed with me long after his black leather jacket disappeared into New York’s hubbub of loonies, and I thought:

“So this is how it feels – to be on the ‘other side’ of extremism?”

We’ve had plenty of loonies from our part of the world dispense similar tirades about the West, about the US, Europe or Israel – and God knows I’m not a fan of those parts of the world or their foreign policies. But, to an ordinary citizen, who has as little control over what their government does as we do over ours, how would it feel, to be so sweepingly abused, to hear people talk about obliterating our very existence, burning flags and defacing temples as if it would have no consequences, as if it would offend or incite nobody; even for someone like me, deeply suspect of nationalism and all other -isms in general?

I admit that it would hurt – that it does hurt.

It’s complicated. It’s complicated when imperialism is involved, when capitalism and neo-colonialism is involved, when there is a legitimate anger and resentment and struggle for justice, like in Palestine, or Iraq, Afghanistan and Pakistan. It’s difficult to talk without the invective, without the bitterness, when you have been truly wronged; but all I can say is, let’s let humanity win.

That’s all we have, to keep us alive and save us from total catastrophe. At the end of the day, it’s the ordinary citizen’s sympathies and conscience that we can appeal to, we can touch; it’s their ordinary humanity that we can depend on, not any politician’s or government’s. Let’s not sacrifice that, no matter which ‘side’ we come from.