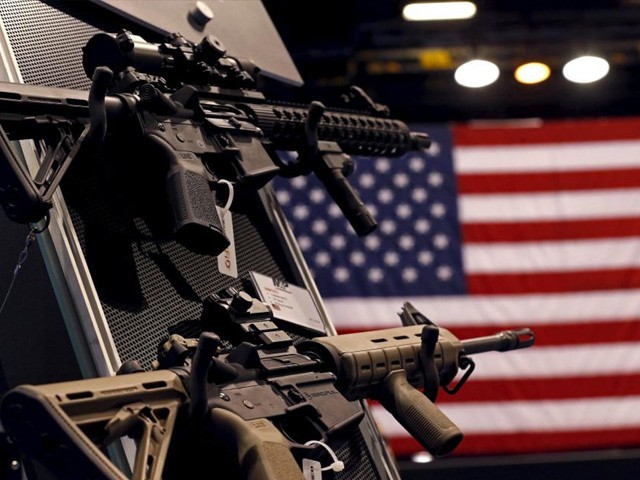 An exhibit booth for firearms manufacturer Smith & Wesson is seen on display at the International Association of Chiefs of Police conference in Chicago, Illinois, October 26, 2015. PHOTO: REUTERS

On November 14th, the US faced another mass shooting at an elementary school in California. The shooter, identified as Kevin Jason Neal, killed his wife, shot his neighbours, attacked the school and drove by the area while shooting at motorists. He was responsible for five deaths and injuring 10, which included children. Eventually, he was killed by the police.

This tragedy is one of the countless mass shooting incidents in the US that have escalated to a point where the country now leads the world in such mindless tragedies. Surprisingly as it is, the statistics surpass even that of countries like Pakistan that are rife with violence and absolute lack of implementation of law and order when it comes to crime or gun control. It is indeed a point to ponder upon.

What needs to be noted here is that despite the grave number of mass shootings, the efforts towards gun control are still not serious enough or of the magnitude required.

Pakistan had a jolting wakeup call after a terrorist attack on the Army Public School (APS) in Peshawar on December 16th, 2014, that killed 148 people, most of which were children. Following the attack, special military tribunals were immediately put in place to try the suspects; the penalties for those found guilty were especially harsh.

The National Action Plan (NAP) was also introduced which gave the army an upper hand in managing tribal areas. Since the perpetrators were the Taliban, the military clamped down even tighter upon the federally administered tribal areas. In the aftermath of the attack, the differentiation between ‘good’ and ‘bad’ Taliban was erased. This announcement made by Pakistan’s former prime minister, Nawaz Sharif, was declared to be, in the words of Matthew Green in Newsweek, “a rare public acknowledgement of Pakistan’s murky record on state sponsorship of extremist proxies”.

Furthermore, Operation Zarb-e-Azb, a ‘comprehensive operation’, along with other military operations, was also initiated to flush out terrorists from the North Waziristan area of Pakistan.

If a militancy-infused, developing country like Pakistan can eradicate terrorists and terrorism, and put in place efforts to curb attacks, one cannot fathom why the most powerful nation in the world, which boasts of being a global leader, cannot put in place something as crucial as stricter gun control laws? Pakistan’s children were mercilessly targeted and shot, and the nation decided “never again” – so what’s stopping the US from protecting its future generations?

The US keeps asking Pakistan to “do more” in curbing terrorism, but those seem to be big words coming from a country that needs to take a look in its own backyard before pointing fingers at others.

If one were to compare, the possession of firearms per 100 residents is eight times higher in the US than Pakistan, which is quite a contradiction, given the fact that Pakistan is more politically unstable than the former. The rate of auto theft robberies, burglaries, and the actual fear of crime is also significantly higher in the US.

But despite all efforts to reduce the incidences of mass shootings in the country, these incidents remain fearfully common. Even though the US only has 4.4% of the world’s entire population, this population owns 42% of the guns in the world. Moreover, 31% of all global mass shootings have taken place in the US too. Not only that, but in over half of the shooting incidents, the perpetrator is armed with more than just one firearm.

Even if these reasons/facts are brushed aside as mere theories for explaining violence in the US, the fact that cannot be ignored is that the US has an unthinkably high number of guns. Not only that but according to The New York Times, the American society is significantly more violent and finds more lethal ways to commit the same crimes that wouldn’t be half as equally gruesome had it occurred in any other part of the world. In attempting to explain what could possibly make it so, the reason still boils down to one thing – lax gun control laws that make these weapons readily and easily available.

When looking at statistics of crime in the US, it is seen that:

2) The rate of intentional homicide is 55% more in Pakistan

Hence, one wonders how the US still leads the world in mass shootings despite the fact that the rate of executions as punishment is similar in both countries.

There are certain statistics that possibly answer that question, as the US surpasses Pakistan in certain areas.

I’m not saying that no efforts are made at all to reduce the incidences of mass shootings in the country. However, they continue to remain fearfully common. Researchers struggle to explain the phenomena and a lot of commonalities are found. For instance, many of the shooters were found to be mentally deranged loner type individuals. These shootings are also explained in terms of the ‘copycat’ phenomenon, where individuals attempt to replicate past shootings and also to gain fame that the shooter receives post event.

Stricter guns laws have continually been suggested as a means of better control but this continues to remain a catch 22 issue that runs in circles without getting to a feasible solution; people need the guns to defend themselves and hence have access to firearms more easily.

According to Adam Lankford, associate professor of criminal justice at the University of Alabama, the desire for fame and success is among the key targets of the new American generation. For the mentally deranged, upset and chronically depressed, quantifying success means to gain fame by any means necessary. The media coverage that these shooters receive following the cases becomes a huge incentive to act similarly.

Studies such as Lankford’s only prove that the combination of access to firearms, drugs, mental instability and motivations of fame and name is a lethal one that is putting the US on the world map when it comes to mass shootings. Unless a rigorous and uncompromising clamp down is placed upon all these precursors simultaneously, these incidents will be hard to curb.

In attempting to understand why Pakistan is behind the US when it comes to these incidents, researchers in Pakistan isolate a few reasons. The first is family connection. The perpetrators of mass shootings in the US have mostly been loners who lived alone without familial support to help them through whatever issues they were going through. No doubt, their frustration and distress, whether it was material or emotional, eventually reached levels that could only be alleviated by unleashing it out upon the public in the form of violence.

It is sad but with each mass shooting that occurs in the US, the immunity to such violence increases and the shock over them lessens. What better example to give of this than the fact that when expressing his ‘grief’ over the incident, President Trump, the leader of the people, referred to the wrong incident in his tweet: 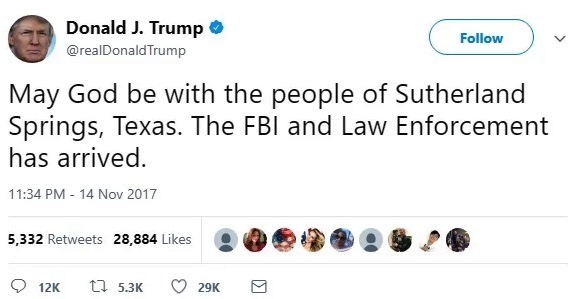 The President of the United States is tweeting at midnight about the wrong mass shooting and it's like the 500th most insane Trump story of the week.

Today the president of the United States couldn't remember and didn't even bother to check where the country's most recent mass shooting took place. https://t.co/jtcvuGn97Q

The fact that the U.S. president can't even keep track of all the mass shootings is a fairly compelling argument for gun reform. https://t.co/d5HEECdgbb

Violence is unacceptable, no matter where in the world it occurs and regardless of who it is perpetrated against. At the end of the day, it is imperative that any and all steps be taken to lessen its occurrence by whatever means possible. Because when violence is unleashed in schools and places of worship, it becomes heinous and inhumane.