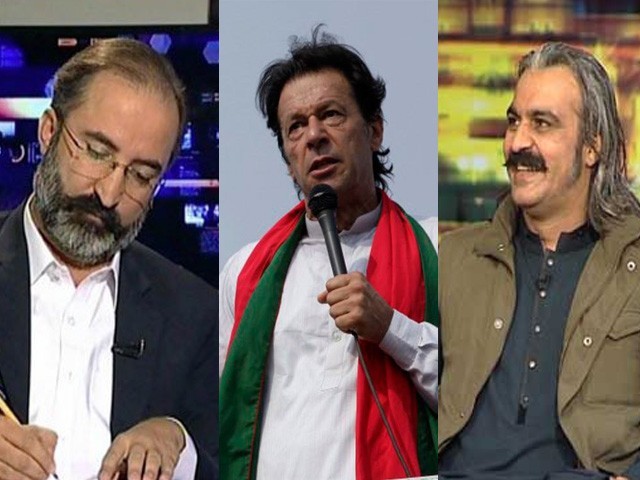 When Imran finally had something to say, it was to support Gandapur, and call Kundi a “dissident”, declaring that he would be fired.

I can clearly remember the 2013 election – it was my first time voting and I was going to vote for a ‘naya Pakistan’. As a naïve 18-year-old who was generally unfamiliar with politics, I was swept away by the idea of changing the country, the idea of progressing, and Imran Khan’s chants of “tabdeeli aa nahi rahi, tabdeeli agayi hai” (Change is not coming, change is here) served as fodder for my adolescent idealism.

Yes, I voted for Imran and the Pakistan Tehreek-e-Insaf (PTI) that day, and yes, I regret it today.

Months later, when the focus was still on the sit-ins and the rigging, I convinced myself that he was a man demanding justice from a flawed system. Then he got married in the wake of the Peshawar attack on the Army Public School (APS) – the attack shook the nation and brought us all to a standstill, and even though I felt this move was quite insensitive given his role as a political leader, it was his personal matter and I moved on.

Such instances piled up over the years, and it became clear that the party itself was quite immature; it needed a significant amount of time to grow and learn how to function. Imran’s behaviour didn’t help either – his racist comments and decisions to welcome all the politicians he previously bashed into his party, all played a role in me distancing myself from the party, until I was no longer a supporter. There’s only so much one can justify, after all.

However, perhaps deep inside my heart, I had still kept some hope alive. Hope for some tabdeeli. Hope that by some miracle, PTI would pull its act together and we might still get some version of a ‘naya Pakistan’. The naïve idealist was still alive inside me somewhere, veiled behind the toxic fumes exhaled by the real world. That idealist would turn left and see the Pakistan Muslim League-Nawaz (PML-N) fumbling and flailing, turn right and see the Pakistan Peoples Party (PPP), and decide that perhaps, come next election, she might just end up voting for PTI again. The lesser of all evils, and all that jazz.

Well, not anymore. The naïve idealist is dead, and in her place is yet another angry Pakistani.

Most people are by now familiar with the shameful incident that happened in Dera Ismail Khan last month. A 16-year-old girl was stripped and paraded naked on the streets for an hour, and instead of helping her, spectators were filming the whole incident. It has been weeks and no justice has been served yet – the main accused still walks free. A week ago, PTI MNA Dawar Khan Kundi accused PTI Minister Ali Amin Gandapur of shielding and providing “logistical support” to the perpetrators. Kundi claimed that he had personally investigated the matter and upon finding Gandapur involved and responsible, called for his removal.

In the midst of this developing story, I remained hopeful that Imran would step up. My opinion on his political acumen (or lack thereof) aside, I had for some reason believed Imran when he claimed to be different from all the other politicians. Asif Zardari was corrupt, Nawaz Sharif was corrupt, almost everyone was a liar – between such a great pick of leaders, Imran seemed as appealing as water for a person dying of thirst. I expected him to tweet about this matter, or at least release a statement, addressing the gravity of the situation, assuring that he would ensure that justice is served, that he would do the right thing.

A day passed, then another. It grew into a week of radio silence on this matter, while he tweeted about literally everything else.

Until yesterday, when Imran finally spoke up, and I immediately wished he hadn’t. For when Imran finally had something to say, it was to support Gandapur, and call Kundi a “dissident”, declaring that he would be fired. His supporters called Kundi ‘another Ayesha Gulalai’.

To say that I was shocked and disappointed with Imran’s stance would be an understatement. He did not address the young girl who is being denied justice – adding yet another dent to PTI and Imran’s poor track record on women’s issues. Imran has repeatedly rejected and opposed bills pertaining to women’s rights, and even opposed reserved seats for women in assemblies, and this instance offers further proof that when it comes to women’s issues, Imran has always been noticeably silent.

Instead, his wrath was directed towards Kundi. All of a sudden it was revealed that Kundi is an estranged member of the party, that he is a liar, that he doesn’t even attend party meetings anymore. To top it all, he mentioned that he spoke to the respective Inspector General (IG) and was assured that there is no pressure on him from anyone. I’m sure powerful men like Gandapur didn’t pressure the IG into delivering such assurances. If there is no pressure, then why is the main accused still a free man? Who is protecting him?

After all, this is not the first time Gandapur would have landed himself in hot water – he was earlier arrested for forcibly taking ballot boxes and booked for possession of liquor and arms. Imran has, as always, remained silent on those fronts too.

Either Imran is lying to the nation, or he truly is as immature and naïve as he seems.

Imagine if this incident had taken place in PML-N or PPP’s jurisdiction, or if a member of their party had accused another. Wouldn’t Imran be up in arms about this? Wouldn’t he make this a huge political issue? Then why is his moral awakening only limited to jurisdictions and parties that are not his own? Kundi has suggested that Gandapur has ties to banned extremist groups that Imran is afraid of angering (or alienating), which is why he is not acting against him. I don’t know how true this is, and I honestly don’t care, because Imran has today become exactly what he once claimed he wouldn’t be – exactly like the rest.

Duplicity, cowardliness, and lies – I would have expected this of Nawaz, or Zardari, as growing up we were told to not expect much from our politicians. Imran, with his clean record and his demands for justice (the rigging that haunts us to date), made me expect more of our politicians, made me expect better. A part of me was confident Imran would be that person. I will admit today that I was wrong.

His former wife, Reham Khan, recently appeared on a prominent news show to express her disappointment over Imran’s response to this entire incident. Reham, who has personally visited the young girl and promised to bring her justice, is now being attacked and slut-shamed on social media by PTI supporters for being yet another “traitor”.

The two main perpetrators must be included in the FIR in Shareefa Bibi case.
We demand swift justice! https://t.co/GXAkMSoKeN

I am prepared for the negative comments that will be fired at me but I have promised Sharifa bibi that I will demand the arrest of the main culprit. If you are not hiding him then just help us get him arrested.

I’m sure Imran has his reasons for taking the stand that he did – after all, politics is a game and he is still struggling to play. However, leadership is how you judge who you vote for. When I felt that Imran was a good leader, I could somehow excuse the political immaturity of his party. But if the PTI doesn’t even have a good leader anymore, then what does it really have? What makes their incompetence different from the rest?

After witnessing Imran do something I have seen countless times in Pakistan’s colourful political history, it is now high time that he at least stop pretending to be better than all the other “politicians” out there – he is now one of them. Apparently, the only tabdeeli Imran was successful in bringing was to tabdeel himself into yet another untrustworthy disappointment we get to call a politician.

If this is what Imran’s ‘Naya Pakistan’ would entail, I think I’ll stick to living in the Pakistan of old. At least here I know not to expect better.