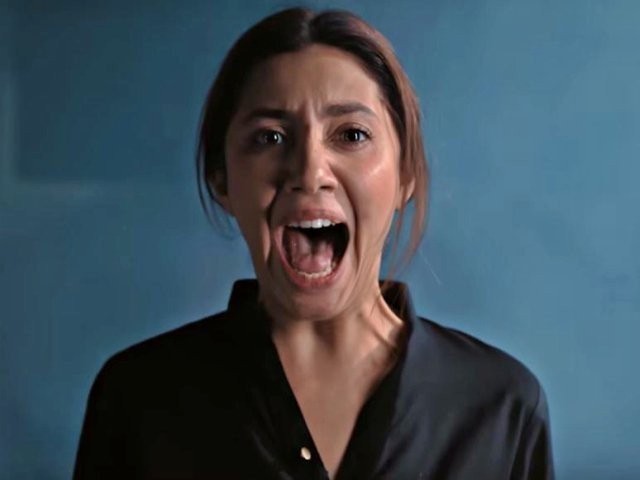 There are bigger and better issues that still need to be addressed by Pakistani society, but Verna is not one of them. PHOTO: SCREENGRAB

I recently came across the news regarding the ban on Verna, Shoaib Mansoor’s upcoming film, and was shocked, to say the least. Mansoor has played a monumental role in the revival of Pakistani cinema, delivering masterpieces like Khuda Kay Liye and Bol. Not only were both great films, they were also centred on very important issues that plague our society today.

Bol highlighted the practice of having innumerable children in the name of religion, especially when you cannot even feed them, giving us the legendary line,

(When you cannot provide for them, why do you give birth to them?)

Likewise, the movie Khuda Kay Liye spoke out against forced marriages and extremism in religion, and is often fondly remembered with Naseeruddin Shah’s famous line,

Both films shed light on our societal issues – issues that were considered taboo and thus weren’t discussed, let alone featured in movies. Mansoor has hence won critical acclaim because he makes it a point to raise his voice against the injustice and intolerance in our society, making his films a living, breathing proof of his thoughts.

His latest movie, Verna, is no different, as it deals with the issue of sexual abuse, harassment and rape, but interestingly, also has a female protagonist willing to stand up for herself. The film’s lead is none other than Mahira Khan, who is now quite popular in Bollywood after starring in a movie with Shah Rukh Khan, titled Raees. From Bollywood stars to those from our own film industry, most people were excited for the release of the film.

Love the intensity in the trailer @TheMahiraKhan can't wait to watch it https://t.co/elzpjb9T4D #Verna

It was shocking then, to read that the movie has been banned in Punjab by the censor board because they suggest,

“The general plot of the movie revolves around rape, which we consider to be unacceptable.”

In a more recent revelation, it is reported that the film cannot be approved by the censor board as,

“The subject is very sensitive. The film portrays the government institutions in an undesirable manner.”

This came as quite the surprise to me as Bollywood movies, especially those that highlight rape in India, tend to be released without any issues here. However, a movie highlighting the reality of our own society and the plight of our own women, is dangerous and needs to be banned.

Gone are the days when the word “rape” was said in hush tones. But in today’s day and age, where rape has seemingly become so common that you can’t even trust your own brother, father or uncle, why is it such a big deal to talk about it and spread awareness regarding it?

Recently, there was a drama being aired on Pakistani TV called Yaqeen Ka Safar, which showed a girl from a village getting raped by the son of a feudal lord. The drama addressed the importance of women empowerment and for the need to stand up to powerful people when it comes to justice. It is not uncommon in Pakistan to see powerful people take advantage of their influence to escape justice, which is why it was refreshing to see a drama addressing this issue and also providing encouragement to the survivors to speak out and demand justice. If Yaqeen Ka Safar took us one step forward, the ban on Verna has taken us two steps back.

Similarly, we are currently witnessing Saba Qamar portraying the life of Qandeel Baloch in the drama serial Baaghi, which also focuses on honour killing in villages and speaks out against honour crimes against women. These stories aren’t a threat to our society; rather, they help us understand how these issues have been affecting our society and have restricted basic women rights and empowerment in Pakistan.

It was only last week that news emerged of a 16-year-old girl being paraded naked in Dera Ismail Khan, in order to redeem her family’s honour. The poor girl was held accountable and was used to seek revenge for something that her brother had done, all in the name of honour. I wonder why such horrific acts seem to be allowable, but a movie about rape is “unacceptable”?

In a country where a chicken got sexually assaulted today, the censor board has issues with #Verna coz it talks about rape.

Time and again, we see how issues prevalent in our society are always silenced in the name of honour and religion. There was a time when women were told to stay quiet, even when they were assaulted or physically abused. I believe that even though we are living in the 21st century, a lot of us still have the mind-set of old, where women are expected to surrender even when they are the ones who are suffering.

In my opinion, the Verna ban, if there's a ban, is not on a film about rape. It's about powerful politicians in the film who rape, harass and force the victim and her family to be silent and submissive.

Whenever someone tries to talk about these issues or does something to shed light on them, there is always a barrier created by our very own authorities and general public. It’s high time that people and authorities in Pakistan look for solutions to these issues rather than trying to silence them. The irony is that banning such films is what makes us realise how necessary it is to continue talking about the very issues those in power are trying to suppress.

In the wake of this ban, people, including celebrities, have come out in support of releasing the film. Deepika Padukone, whose own film Padmavati is facing similar issues with its release in India, supported the film and spoke out against its ban.

Deepika on the ban of Mahira Khan's Verna:
"It’s sad that a small section don’t understand the power of cinema & what it can do to the world. It brings people together, spreads love, it’s fascinating what cinema can do. It’s sad that a certain group choose to not recognize that."

Many people came out to protest the ban, with Mahira herself tweeting on the subject of being silenced. As an actor who has successfully represented our country internationally, we as a nation should acknowledge how big of an initiative she has taken by attempting to work on such a sensitive issue. She deserves support, applause and encouragement.

Men in Rajanpur promoting #Verna and protesting its ban. Rajanpur is one place where rape is very common. People had their hopes that #Verna will b a turning point. @HamidMirPAK @MalihaHusain @MoeedNj @NawazMariam @humashah @najamsethi pic.twitter.com/at48vYbVa1

May the power of the voices of the people be stronger than a few in positions of power. #verna

Tonight I realize how powerful artists are, not those in power. We are. Why else do we get banned? Why else do our films pose a threat to them? In this game of power – we will always win. Art/love/truth always does! #PowerDiGame #verna

The cast & crew of #Verna must be proud. Only master pieces get banned in Pakistan. @TheMahiraKhan very proud of you and I hope you know regardless I’m watching this movie in cinema

After spending a long time in decline, we are now witnessing content on Pakistani TV and in Pakistani cinema which we can actually relate to, on problems that are ingrained in our society. In my opinion, the director and the actors are taking a great initiative, and even though the government is not supportive, the public should continue to protest until we see a change.

Heading to Karachi and hoping by the time we land that Pakistan Censor board will have done the right thing #ReleaseVerna #Verna #Zarrarkhan #MahiraKhan pic.twitter.com/t5uxTkClz0

So far, the movie has been scheduled to release internationally, and is seemingly only banned in Punjab, as theatres in Karachi have added Verna to their schedules, with the movie releasing today. In case the ban is not lifted in Punjab, we must make sure to watch and support the movie nonetheless. There are bigger and better issues that still need to be addressed by Pakistani society, but Verna is not one of them.