Will anyone remember Lady Constable Shabaana? 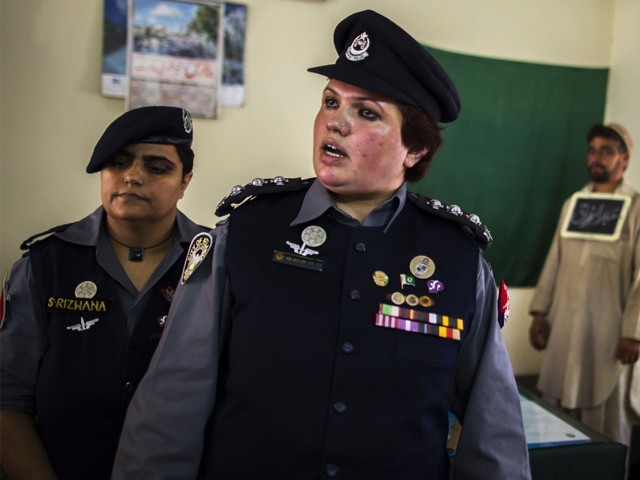 Pakistani Police Inspector Shazadi Gillani , the highest ranking female police officer in Pakistan's most conservative province, talks to a member of her team at a police station in Abbottabad in September. PHOTO: REUTERS

She looked at her reflection in the stained, old mirror.

Smoothing out the creases in her pants, she eyed her widening figure apprehensively. Even the long duty hours were doing her no good.

(I should really start having the weight-loss powder that Sabeen and Nazish told me about. But even though she uses the powder, Sabeen is still huge)

(Shabaana! Come have your tea, it’s already getting cold!)

As she sat down in front of her mother on the wooden stool, where she was making breakfast on a stove on the kitchen floor, her mother eyed her attire disapprovingly. She ignored the heavy glare and started eating her paratha.

(Stop having paratha for some time. Khalida told me that suitors demand a girl who is thin…if you lose weight, you’d automatically look younger)

Shabaana sighed and put the morsel down.

Ignoring her mother’s calling, she put on her gown and scarf and left the house in anger, only to realise she hadn’t told her mother of her long duty hours in the new schedule for Muharram. She considered for a minute to turn back and inform her mother but looking at the time, she knew she had to hurry or she’ll be called out for being late.

(They already taunt me about father’s constabulary.)

Shabaana had joined the police force after her father had been martyred in an encounter with a local group of dacoits (armed robbers). The provincial government had announced Rs100,000 for her family which to-date remained a mere announcement.

No honours were given, no ceremonies held.

(We are from an underlooked department of security forces. If we were in the army, we would have gotten a medal or people would have remembered. It’s not like father killed a terrorist, he killed a robber and what is the point in that)

She was the oldest of three daughters of Constable Ghulaam Deen, and the fattest, she mocked herself. After waiting for her paternal and maternal uncles to fulfil their tall claims at her father’s funeral of how they will support his bereaved family, Shabaana realised it was all in vain. Nobody truly cared about them, so she would have to. Abandoning her dreams of higher education, Shabaana wore the lady constable uniform and joined her father’s profession. When she started the job, her mother had to face the family’s wrath.

(She will wear pants and go out? Have you no shame, Nabeela? You think you can send your daughter out and work just because you don’t have a son. Society will ridicule you if you live off your daughter’s earnings.)

Affected by this talk, her mother had deplored her to not take this job but her sisters needed to start school, their old house needed repairs and their kitchen needed food.

Hearing the voice announcement on Metrobus about her stop, Shabaana was awoken from her reverie. Walking for even a few minutes left her severely out of breath. Scorched from the unforgiving glare of the sun, Shabaana felt suffocated in the black gown she was wearing. Painstakingly, she made it to the police station. The old coaster bus was already lined up for their departure to different imambargahs and Muharram procession sites. She rushed inside to take off the gown before the commanding officer saw her and objected to her attire.

(Wear your uniform, not a burqa. Did you come to work at the police station or to lead Friday prayer?)

She hurriedly took off her gown and arranged the dupatta on her head. She could hear sniggering behind her as she walked out consciously.

(Next year, she’d also have to get specially tailored pants for herself)

Shabaana heard such malicious comments about her physique every day.

It was nothing new for her. What stung her, the most was that such words came from her fellow lady constables. They understood the harsh realities for women working in this field. Yet they were the most unforgiving faction of the society. The bias that a woman harbours for another woman is the purest form of hatred in the world. Shabaana had become somewhat immune to this mockery and hatred.

The sniggers followed her out to the yard. Annoyed, Shabaana elbowed them out of the way to enter the bus. She boarded the bus and got herself a prime seat.

The atmosphere around her was thick with activity. The hustle and bustle of the Muharram processions was not new for her. The stares she received here were also similar. Ignoring them, she invoked her ‘police mode’ and started the body search, which was going to be her job for the rest of the day. It was hullabaloo. Children crying, women squirming to avoid the search, bags and bags of food to be checked for suspicious items, and disciplining those who cut the line; it took half her day before she was relieved from duty by her colleague.

(Look at these people! We are here for their protection and these people show us attitude as if they are royalty)

Before long, she was called to be stationed at the second entrance for women as the crowd was swelling with each passing minute. She was the only constable on duty there.

(Look at this! They made us stand way at the back, there is no action here. Who cares about us anyway?)

It was in the lull that followed after azaan-e-zuhr (call to afternoon prayer) that she heard the whimpering sound. She ignored it. Kids had been crying around her all day. The whimpering became louder. She could now hear more clearly, the sound of a kid crying out for his mother. The sound came from behind the entrance tent. Reluctant to leave her post, Shabaana waited for the sound to diminish. It did, but ever so abruptly. Shabaana strained her ears to listen but it was silent now. The noise of the procession was getting more distant now too.

“Mamaaaaa! Mujhay mama k…” a child cried out loudly before someone or something interrupted him.

(Motherrrr! I want my mother…)

Her ears prickled, sensing danger. In her short career, she hadn’t faced any real danger to-date. She snuck out, scouting for the source of the sound.

She was puzzled at the sight before her eyes. A middle-aged woman in a black burqa was throttling a child, who looked to be about five. She seemed to be suffocating him, trying to subdue his crying. Her other hand shifted and Shabaana caught the glimpse of the revolver in her hand which perched against the boy’s ribs. Startled, Shabaana struggled with what she should do. The walkie-talkie they had was all the way over in the other entrance.

She took a deep breath and hid from plain view, trying to hear the words the woman was saying. She caught nothing. The woman changed tactics now. Softening her voice, she tried to sweet-talk the child. She whispered to him. Shabaana edged closer quietly and strained her ears to listen.

(Dear child, I also have chocolates, and if you come inside with me, I’ll get you a lot of toffees from my brother.)

The kid, however, kept squirming to get away from her.

Frustrated, she looked around from bushes and checked if somebody could see them. Shabaana stooped even lower but tried to edge on towards them at snail’s pace.

She had figured out what the woman was attempting to do. She probably had help on the side, who she couldn’t talk to due to mobile networks being blocked during the procession. She was armed and was probably aiding an attack inside or was carrying explosives with her. Shabaana figured she must need the kid to go inside with her huge hand bag.

Children cause such a ruckus that it can distract the security personnel at such processions and also make anyone who is entering look less suspicious. One lapse in the body search queue and she’d be inside, surrounded by hundreds of people where she could set off the detonator and cause maximum number casualties.

Shabaana’s blood ran cold when she realised that if any explosion was to occur, it would directly target the five-year-old girl in the woman’s arms. To do or not to do, is in fact the real struggle. Shabaana thought to run away but the little kid was being held at gun-point. She couldn’t waste any more time than she already had. Coming from the other side, from behind the bushes, Shabaana managed to sneak up on them. She longed for a gun here too.

(Long live the police! They don’t even provide lady constables with weapons.)

But she decided to summon all her strength to pounce on this woman to free the kid and upend her heinous plan. She tapped the woman’s shoulder calmly. Alarmed, the woman unconsciously loosened her grip on the kid who managed to break herself free. As the child ran away, the woman pointed her gun barrel at her. Just in a split-second’s time, Shabaana ran forward and put herself in between the woman and the kid. The bullet pierced right into her chest with no exit wound. The gun shots were heard everywhere. Panicking, the woman bolted, leaving a struggling Shabaana on the floor next to her big bag of explosives.

As she lay in a pool of her own blood, her life flashed before her eyes, all wishes unfulfilled, a mother dreaming of a wedding for her, which would never happen. No great love but she felt at peace at last. She had saved a five-year-old girl from certain death and had saved countless lives probably. She saved a religious procession from falling prey to nefarious designs of terrorists.

She was Lady Constable Shabaana and she had achieved her destiny.