She was forced to parade around naked, but instead of helping her, we photo’d her and shared it on social media 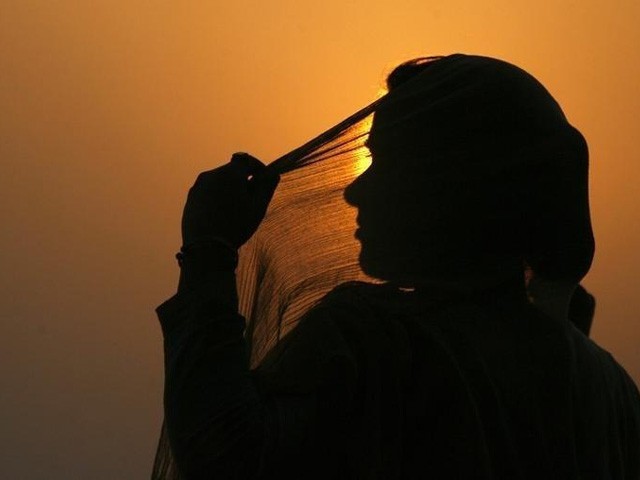 A woman adjusts her scarf as the sun sets over Kashmir's Dal Lake in Srinagar July 18, 2010. PHOTO: REUTERS

Recently, a 16-year-old girl was forcefully stripped and paraded around the streets of a village in Dera Ismail Khan in Pakistan’s Khyber Pakhtunkhwa (K-P) province. The reason given was that she was ‘paying the price for her brother’s crimes’. Her brother had allegedly gotten involved in a relationship with a girl from the village. To resolve the matter, he had already been fined by the local jirga and the tehsil nazim. But obviously, some hot-blooded relatives were not satisfied and decided to pay back in the same coin.

While the news itself was both saddening and infuriating, it reiterated the bitter truth that in our country, women are still treated as men’s property, to be used at their whim for pleasure, inflicting pain or even to be used as payback.

But what was more horrifying was the fact that a picture, allegedly of the girl bearing the punishment, was going viral on social media.

The picture, taken from afar, shows a young girl standing stark naked, covering her private parts with her hands. Standing across the narrow lane, in the middle, is a group of men silently staring, either at the girl or themselves. While I can’t even bear to look at the picture again, not even for the sake of writing this piece, it is being circulated on Facebook, apparently to create ‘awareness’.

For me, reading the brief detail of the incident was enough to try to imagine the pain, shame and shock which the girl had to face. I did not need visual proof for this news, no one did. So then what added information is being disseminated through this picture? How many men were looking? How did the girl look? How naked was she or was the verbal description exaggerated? How did she manage to bury herself in shame? Was the day sunny or cloudy? Were there some patches of shrubs or trees around to provide some cover?

Do we really need answers to these questions?

What I was able to see in the picture was that the onlookers had kept themselves at a considerable distance, as if the child was a leper, as if it was better to stay away in case dishonour or shame was a contagious disease. What I was also able to judge from the picture was that no man tried to cover the girl, no man’s ghairat (honour) was invoked to see a sister-like or daughter-like female being forced to bare all. No one tried to lend any piece of cloth – a chaddar or even one’s shirt – to drape her. They all simply stared, too numb to react, too afraid to raise a voice, or maybe too smitten to give up a free porn show.

What I want to know is that whoever raised his phone to take the picture, did he think of using the same phone to call the police or anyone related to that girl? It is being reported that the girl was forced to parade in this appalling condition for an hour; it must have taken at least a few minutes to bring her in this condition. What I don’t know is that where were her relatives – anyone, a cousin, uncle or aunt – during all this time? What I want to ask is why a boy wasn’t chosen for the payback, although having asked this question does not mean to suggest that men do not possess any honour or do not deserve any respect. But why was a woman chosen as revenge for a crime that her brother had allegedly committed?

A case was later registered against the culprits responsible for the incident. Eight suspects have been arrested so far. Four of them confessed to the crime and later claimed that this was done under pressure from the police authorities, while the other four denied the charges. However, the prime suspect, identified as Sajawal, is still on the run. The Pakistan Tehreek-e-Insaf (PTI) MNA, Dawar Khan Kundi, in a letter written to his party chief, Imran Khan, claims that he personally investigated the matter and discovered the PTI K-P Revenue minister, Ali Amin Gandapur, to be responsible for harbouring the accused. Kundi has demanded the removal of his fellow party member from the ministry.

While a bill asking for action in the case has also been submitted to the provincial assembly, it seems that the lawmakers of our country are undecided as to whom they should support. A girl whose honour has been tarnished is forced to hide and hang her head in shame, but her perpetrators still play around with confessions and denials, in possible hope of being safely acquitted.

But what about the sickening mindset that led these people to commit such horrendous crimes? While those behind this tragic incident do deserve to be punished in a lawful manner, has anyone thought of taking steps to change the mentality of these people? In such incidents mostly, women in opposing parties are subjected to rape or abuse because they believe that is the only way they can tarnish their rival’s honour – by targeting their women. The current incident is no exception, except it may prove to be even more traumatising.

Where literacy is the key to fight the outcomes of ignorance, moral education is a move which should be considered and practiced on an urgent basis to try and change the disgusting way we treat women in our society. The village elders, clerics, teachers can lecture villagers on the importance of protecting each other’s sanctity and should use arguments from both civic and religious segments to eradicate age-old beliefs of honour killing and ‘honour raping’ to restore order.

They should explain that dragging an innocent person in dirt can never cleanse anyone from impurities. They should inform the people that using legal channels, giving moral lessons and even using the jirga system fairly and moderately can solve issues. It might be difficult for the change of mindset to happen from within these areas, hence people from outside need to contribute to the well-being of the society by educating residents and then training them.

And most importantly, we, the literate users of social media, should practice some responsibility too. The phone or any other electronic device is not a toy to play with; social media platforms are not channels of entertainment. Their purpose is mainly to stay connected, share items which contribute in some way to the welfare and well-being of society. It is also used to create awareness about different subjects and also, in some cases, to hold debates and discussions. But if these are the kind of images we wish to portray and if this is the quality of news we want to update others with, I think it is better that we leave this responsibility to the more authentic sources of information.

It saddens one’s heart to think about the aftermath. How and when would the girl muster courage to walk out on the streets from her confinements? Would she receive sympathy or rehabilitation, or would she forever be subjected to blame, source of dishonour and a ‘stay-away’ attitude?  If this effort receives some suggestions in return, I would then like to believe that social responsibility is a target not so difficult to achieve.