No, my ripped jeans do not allow you to believe that it is your right to harass and rape me 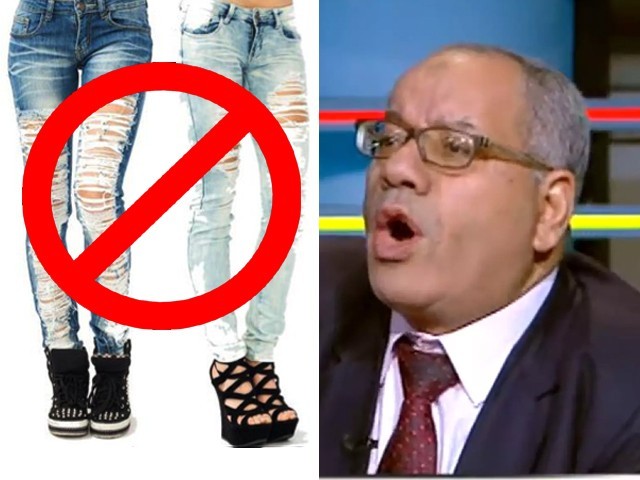 On November 3, 2017, Egyptian lawyer, Nabih al-Wahsh, stated that any woman wearing ripped jeans deserves to be harassed and raped.

They are just clothes, I tell my father, when he passes a comment about my ripped jeans. He doesn’t understand – perhaps he never will. I run my hands along the tiny rips, feeling bits of skin and wondering if the freedom I feel is the oppression they want me to see. I see my legs in a pair of jeans, they see skin that is fighting the patriarchy. I see my choice, they see my rebellion.

On November 3, 2017, Egyptian lawyer, Nabih al-Wahsh, stated that any woman wearing ripped jeans deserves to be harassed and raped. He passed more disgusting comments while on the show Infrad, suggesting that women who dress a certain way deserve to be raped. Wahsh is a known conservative, but it’s still shocking to see such comments from someone whose profession requires him to be a champion for the freedom of his people.

Wahsh claimed that men have a national duty to harass women who dress in ripped jeans. This all goes back to the misogynistic society that many Muslim countries have built their beliefs upon. No, my clothes do not call for harassment. The length of my t-shirt is not a sign for you to come on to me. The rips on my jeans do not allow you to believe that it is your right to rape me.

When you come from a country like Pakistan, rape is nothing new. On any given day, you can turn on the news and see numerous rape stories that occurred on that very day. Rape is taking away the dignity of another human being. Rape is telling the world that you do not care about the value of choice. Rape is a reminder that gender equality may never exist. Rape is telling the world that you see humans as bodies, and nothing else. So to hear someone say that a woman should be raped for something she is wearing is crushing, savage and brutal.

In Egypt, it is no different. Rape is one of the most common crimes in the country. Marital rape is not illegal. It may not be in the top 10 countries with the highest rape statistics, but comments like these suggest that it could be.

“I say that when a girl walks about like that, it is a patriotic duty to sexually harass her and a national duty to rape her.”

What does “patriotic duty” have anything to do with a woman’s clothing? How can one even conceive that something like rape and national duty can go hand in hand? Wahsh, there is a special place in hell for people like you. For a lawyer, you clearly have no ethics or sense of justice.

Why do we live in a place where men have to constantly put women down to bring themselves up? Are some of these men so insecure that they need constant reminders that they are better by pretending that women are inferior? The belief that a man can tell a woman what to wear is the downfall of humans. The power play that so many men believe they need to reinstate is completely backwards. I see it every day in Karachi. And I know that women in Egypt see it as well.

A woman is never asking for rape. If you had any semblance of an education, Wahsh, you would know that. Who said that a girl doesn’t respect herself if she wears ripped jeans? In fact, your respect is not something anyone would need or want. A woman’s respect lies in how she carries herself, how she interacts with others; it has nothing to do with the clothing, or lack of, on her body. Women in burqas get harassed and raped as well. Male rape is just as rampant in our society. If a man was wearing shorts, would you claim that he was inviting rape? No. Because apparently his body is his choice, and a woman’s isn’t, right?

I run my hands along the tiny rips across my jeans, letting them set me free.