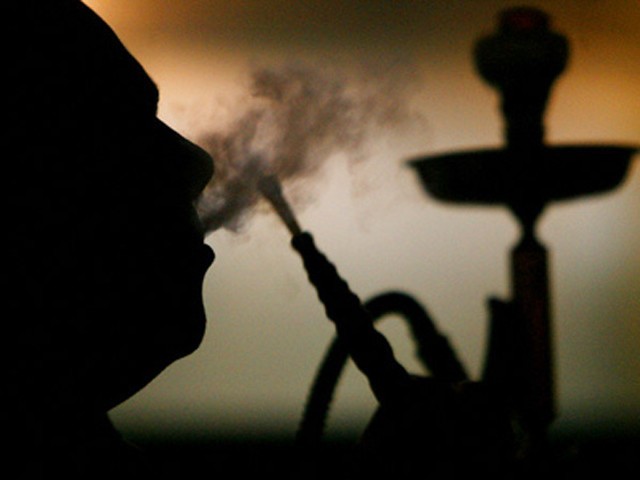 In 2008, it was noted that among university students, 43 per cent of males and 11 per cent females were habitually using Shisha.

There is a common misconception in Pakistan that smoking shisha is not as harmful as smoking cigarettes. This notion exists despite the publication of research conducted by the World Health Organisation (WHO) which shows that an average pipe smoking session of around an hour is equivalent to smoking up to 200 cigarettes.

Scientific studies regarding the adverse health consequences of smoking shisha point to dangers that are similar to, if not worse than, those associated with smoking cigarettes.

Research conducted on shisha use has clearly shown that it has particularly serious health consequences on the lungs and the heart, two vital organs of the body. Lung cancer, cancers of the food pipe, chronic obstructive lung disease, emphysema, low birth weight, precipitation of asthma attacks and pneumonia are some of the health hazards associated with shisha smoking.

Additional dangers not encountered with cigarette smoking are infectious diseases resulting from pipe sharing and the frequent addition of alcohol or psychoactive drugs to the tobacco.

The smoke from shisha, besides other dangerous elements, contains hundreds of potentially dangerous heavy metals like, arsenic, cobalt, chromium and lead. Research has also shown that after 45 minutes of shisha use, levels of expired air, carbon monoxide, plasma nicotine and the heart rate become significantly elevated. Another study has shown that shisha use increases the risk of pulmonary tuberculosis.

Nicotine dependence may also result from repeated inhalation of tobacco smoke from Shisha. Just last week I measured the carbon monoxide (CO) level of a girl who had used shisha 18 hours prior to the test. At that time, her breath CO level was as high as that seen in a smoker who averages 10 cigarettes a day.

Besides lung cancer, shisha use is also linked with increased risk of mouth and urinary bladder cancer.  There is also some evidence that shisha use may also decrease the sperm count in men. Regular shisha users’ lungs function 25 per cent worse than those who do not use the water pipe.

Children are particularly vulnerable to the harmful effects of shisha use.  If they are present in restaurants or at home where shisha is being used, there is an increased risk of them getting lung infections, asthma and sudden infant death syndrome.

Shisha smoking can also transmit infections and viruses such as herpes simplex and hepatitis A.

Being hooked to shisha

Another worrying aspect of the Shisha epidemic is that while it was previously used in countries like Pakistan and India, mainly by the elderly village population, in the past few years its use has markedly increased in the urban areas of the subcontinent. Many restaurants in the major cities of Pakistan now offer shisha to their customers. The price of one shisha session can cost as high as Rs2,000. As a result newly opened restaurants in Karachi, Lahore, and Islamabad are doing excellent business by serving shisha to their customers. Most restaurant managers tell their customers:

It’s mainly fruity flavour and has very little tobacco in it.

People who use shisha need to ask themselves why manufactures put tobacco in it in the first place. The whole idea of having tobacco present in the shisha is to compel the youth to get hooked onto the powerful addictive substance called nicotine.

Those who use shisha have a higher chance of smoking cigarettes than those who do not. Research conducted by Aga Khan University (AKU) has also shown that shisha users are also more likely to use other tobacco products like gutka and naswar than non-shisha users. For youngsters, smoking shisha is glamorous and fashionable, an enjoyable act which symbolises a ‘modern’ way of life.

Below are some common myths about shisha use and the reality behind them.

Myth 1: Shisha is not worse than cigarettes because you do not inhale it like you do when smoking a cigarette.

Reality: In order to use shisha you have to inhale, otherwise you cannot generate the fumes. In fact, shisha smoke is more dangerous than cigarette smoke. Shisha generates smoke in different ways. Cigarette smoke is generated by burning tobacco, while hookah smoke is produced by heating tobacco mixed with flavours in a bowl using charcoal. The end product is the same: smoke, containing carcinogens

Myth 2: People do not smoke shisha alone. Rather they do it in groups so it’s less dangerous.

Reality: A cigarette finishes in a couple of minutes but a shisha session lasts hours, therefore the user is more likely to inhale toxins for a longer period of time. The risk to health is not just to those who are using the shisha but it also affects the health of those present in the room where the shisha is being consumed.

Having measured tobacco smoke pollution levels of some of the famous shisha cafes in Pakistan (to be published in an international journal next month), we were shocked to see dangerously high levels of toxins present in the air inside these cafes. Children present in these cafes also inhale these toxins even if they do not use shisha themselves.

Myth 3: Shisha is not addictive; cigarettes are.

Reality: There is a sharp increase in the number of young adults who say they cannot live without shisha.  A couple recently told me that their son started going to a shisha café every day. According to their son, he could not study unless he smoked shisha every single day, so his parents eventually bought a Shisha for him so he could study at home. This trend indicates that there must be a reason why tobacco is present in the flavour used for shisha.

Myth 4: The water in the base of the shisha works as a filter so the smoke inhaled is not as bad.

Reality: Smoking tobacco through water does not filter out cancer-causing chemicals. Water-filtered smoke can damage the lungs and heart as much as cigarette smoke. Research conducted in Pakistan has shown high levels of carbon monoxide in the breath of shisha users.

Myth 5: There haven’t been any cases where someone has suffered lung cancer or other diseases by smoking shisha.

Reality: Toxic effects of shisha on the human body take time to develop. Reports from the Middle East where shisha use has been common for some time now, show high incidences of lung and food pipe cancer in its users.

Myth 6: Shisha is mostly molasses, not so much tobacco, so it is not so harmful.

Reality: Fruity flavours tend to mask the toxins present in shisha. People are more likely to use it in excess amounts thinking they are only inhaling fruity flavours.

To conclude, I would like to add that our lungs have not been created to enjoy flavours. Their main function is to provide oxygen to the body and to get rid of carbon dioxide. If someone likes a particular flavour, then he or she could enjoy it in the form of a fruit juice or ice cream rather than inhaling it in the lungs with several liters of toxic fumes.