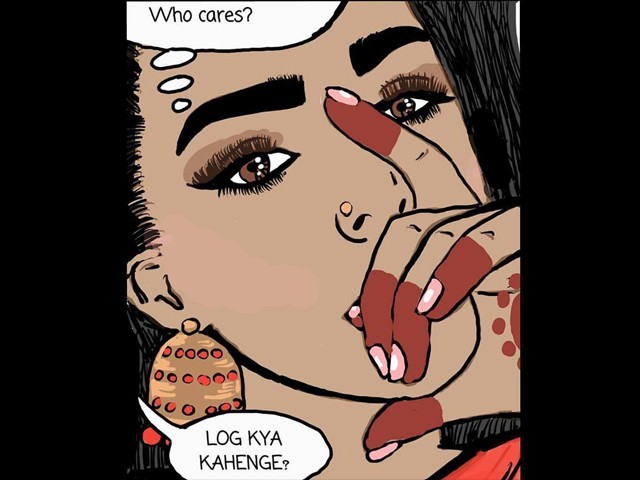 For many, the idea of sending your daughters to another country for anything, let alone education, was enough reason to bring shame and dishonour upon the family. PHOTO: THE PAKISTANI MARTHA STEWART

About five years ago, when I was contemplating calling off my wedding a mere three months before the ceremony, one of my biggest concerns was what my parents would endure as a result of my decision.

If you’ve watched Hasan Minhaj’s Netflix special, Homecoming King, then you’ll know the significance of the phrase “log kya kahengay” (what will people say?). These words have struck fear into many a brown kid’s heart, and indeed are what was on my mind during that pivotal moment in my life.

“I want to wear this dress.”

“I’ve fallen in love and want to marry a person outside of my race.”

My experience with shame doesn’t come close to what some women have to endure. But five years ago, when I found myself lending legitimacy to “log kya kahengay”, I was acting on an entire lifetime of being told that I carried the weight of my family’s honour on my shoulders.

I have two sisters. If you are South Asian, you already know this is an issue. In our culture, boys are considered a blessing while girls are thought of as a burden. In low-income families, the needs of boys are prioritised over those of girls, who have to sacrifice their meals, their education, and occasionally their lives, for the males of the family.

Families that don’t have any male heirs are often pitied. I’ve lost count of the number of times I heard women ask my mother how many children she has, only to respond,

My parents were also criticised for the way they chose to raise their three daughters. We were educated and sent abroad to the US to complete our education. For many, the idea of sending your daughters to another country for anything, let alone education, was enough reason to bring shame and dishonour upon the family. And people made sure they conveyed this to my father.

So, when it came down to me calling off my nearly year-long engagement – I was also marrying outside of my race, to a white man, which could be considered scandalous among some people – I thought about all of the above. I thought my actions would reinforce all the sexist nonsense that had been directed at my parents. I knew the kind of comments that were awaiting them:

“See! They raised their daughter to be free and now she can’t even get married.”

“This is what happens when you give girls too much freedom.”

In truth, what I felt is hardly unique. South Asian women are expected to carry the burden of their family’s honour, and with it are held responsible for bringing dishonour upon them. It’s a concept that is so pervasive in our culture that countless Bollywood plots have been written around it – the story of a woman killing herself after being raped or to prevent herself from getting raped, the implication being that death is always the better option.

In a non-fictional setting, this translates to honour killings, or the murder of a female by her family members, for bringing shame upon the family (the reasons have ranged from dancing in the rain, falling in love, and leaving an abusive marriage).

I should note that it could be argued that intimate partner violence in the US echoes similar behaviour, and that honour killings are not exclusive to the South Asian community. But it’s also worth noting that even our colloquial phrase for committing rape centres around honour – “izzat loot lo”, which literally translates to “steal her respect”.

It’s because of these deep-rooted, misogynist mores that I almost married a man who was absolutely, 100%, the wrong person for me — we were different people, with different goals and ambitions — and yet, as so many people do, I stayed in the relationship for reasons I still don’t even understand. Luckily, for both of us, I had a candid conversation with my parents about calling off my wedding and they were, as always, supportive. They were also kind enough to spare me the details of what people said about it.

By taking the burden of what my decisions, right or wrong, meant upon themselves, my parents freed me from an expectation that had weighed me down for years and years – that only respectable women get married and have children.

Since breaking off my engagement, I’ve discovered many things about myself, including that I most likely don’t want to be married and have children – even monogamy isn’t important to me.

And you know what? I’m not ashamed of any of it.