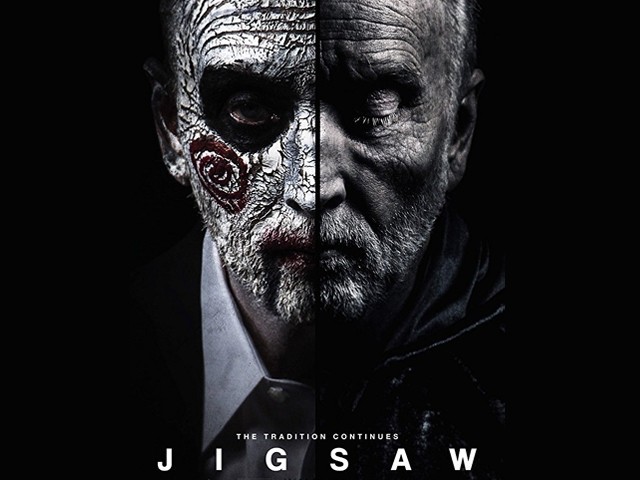 Eventually though, all the deaths start getting tiresome and Jigsaw begins testing your patience even though it’s just 90-minutes long. PHOTO: IMDB

Jigsaw marks both the return and a new beginning of one of the most influential horror franchises of the past decade – the Saw franchise. For six years (till 2010), a new Saw sequel turned up every year on Halloween like clock-work, along with its moralising serial killer, Jigsaw.

By the end of Saw 3D:The Final Chapter, it seemed that the series had run out of ideas and the diminishing financial returns were not a motivating factor either. But seven years on and the series has returned once again on Halloween in an attempt to reinvent itself. The only problem is that it has little interest in actually following through and doing something new.

The film picks up in present day, after a series of murders, all bearing the markings of the Jigsaw killer, two detectives find themselves embroiled in an investigation revolving around a man who has been dead for nearly 10 years. Which begs them to ask the question, is he actually dead? Or is it a copy-cat killer hoping to continue his gruesome legacy?

In many ways, Jigsaw is essentially Saw 8 rather than an actual reboot. The only glaring differences are that it picks up 10 years later with a new set of characters. And much to the film’s credit, it is probably the most well-made Saw film yet in terms of both its camerawork and polished look. It, thankfully, also dispenses off the uninteresting franchise mythology and the jarring editing of the previous entries to present a more coherent film.

Unfortunately though, that also means that Jigsaw is more of the same of something most of us were tired of. Yet again, we find a group of strangers drugged and chained to a wall when they wake up, being forced to play one of Jigsaw’s sadistic games as his voice echoes through the speaker. Whether Jigsaw is alive or not is something I highly doubt anyone really cares about at this point, considering the lengths to which this franchise has gone to keeps this character recurring. It might as well be a talking parrot behind the microphone; it would hardly make a difference.

And of course, yet again, characters are sliced and diced in increasingly elaborate ways with a brand new set of murder devices, whether it’s a human head being sliced like a pizza with lasers or a guy melting to death after being injected hydrofluoric acid. The film doesn’t hold back on the signature death sequences.

Eventually though, all the deaths start getting tiresome and Jigsaw begins testing your patience even though it’s just 90-minutes long. The reason being that towards the end, it almost completely reverts back to its old roots, whether it is its one-dimensional characters being picked off one by one, the lacklustre acting, or the ta-da twist that keeps the door open for another sequel.

Jigsaw finds the Saw franchise returning to its tried and tested formula and your motivation for seeing it should be fairly simple – if you’re a fan of the previous films and the elaborate death sequences they are notorious for, you’ll like it. If you are not, then this film likely won’t win you over to the series.