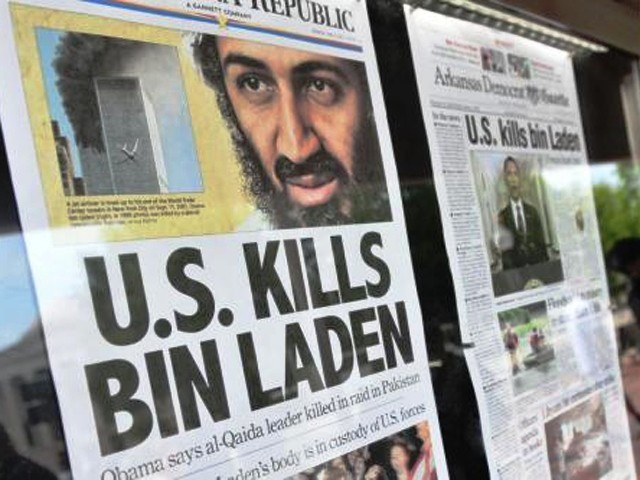 For Pakistanis, Laden’s death was an anti-climatic moment.

While euphoric crowds in Washington and New York celebrated the death of Osama Bin Laden soon after US forces raided his house in Abbottabad, the mood in Pakistan remained solemn – thick, razor-edged with unease.

Not in mourning and not in grief, but rather in apprehension. What now? The question looms large.

For Pakistanis, Laden’s death was an anti-climatic moment. Ever since 9/11 and subsequently the United State’s ‘war on terror’ which went full throttle with the fall of the twin towers, national security has been shot to pieces in Pakistan.

The life of the average Pakistani has been severely affected: oscillating between a deep-rooted fear, resignation and trying to fill his family’s empty stomachs – bloated with malnutrition.

Suicide bomb blasts have become commonplace. As Ahmad Rashid, a Pakistani journalist succinctly puts it in an article for the BBC website:

“Today al Qaeda’s philosophy is one man, one bomb. It does not need another 9/11 to make its mark.”

For the world, Laden represented the face of al Qaeda, the notorious poster boy, the much-loathed avatar for the West, and the adored idol for al Qaeda supporters, that little boys in many a madrassas strived to be, live up to.

And it was this man, a jihad-hungry demon for some, and a warrior messiah for others, who was finally found and annihilated in Abbottabad, a city nestled at the foothills of the Himalayas, on the Orash plain.

The city was named after the founder, Major James Abbot, a British general, in the 18th century who served as the Hazara district’s Deputy Commissioner till the fulfilment of his term in 1853.

Abbottabad, located in the Hazara district, 4,134 feet above sea level, is scenic town whose hill-station-like weather makes it a pleasant get-away from high-city living.

While the local and international media at large currently spews out its news stories about the raid in Abottabad, Laden, new insights and developments in the aftermath of the raid, analyses and conspiracy theories, hard-hitting opinions tinged with sarcasm, humour, self-indulgence and self-righteousness, an important question remains prevaricated:

What metamorphosis will the world undergo now in light of this turn of events?

Will the world be a ‘better place’, as US Vice President Joe Biden said:

“…the world is a safer place today, not only for the American people but for all people.”

Is it really, or would one simply be duping oneself into thinking that the world’s wars and plight of its inhabitants can be fixed right with the fall of this al Qaeda superhero?

Will the drone strikes continue in Pakistan at the hands of the US, and as a result, continue spawning more Laden’s in anger and retaliation? Will this global state of paranoia and creeping malaise ever end, ever recede?

Perhaps it isn’t all that simple. Perhaps there is more than meets the eye. Today, even conspiracy theories are taken at face value, oddly making more sense than ‘factual’, spoon-fed ‘truth’ – served right up by the media.

But Pakistan now finds itself in a tough predicament, as Pervez Hoodbhoy, a professor and political analyst states in his Op-ed for a local publication:

“Osama’s killing is now a bone stuck in the throat of Pakistan’s establishment that can neither be swallowed nor spat out… To appear joyful would infuriate the Islamists who are already fighting the state. On the other hand, to deprecate the killing would suggest that Pakistan had knowingly hosted the king of terrorists.”

We’re in a pretty fix – knee-deep and wedged between trying to keep cool the hot tempers of religious fundamentalists on one hand, and act out the two-faced role of the straight-backed, tight-lipped diplomat to the international community, on the other.

Whatever little good comes out of the country is soon to be blotted out by this travesty of a cat-mouse chase – like a B-rated action flick replete with the barbaric, bearded bad guys, and the clean-shaven Marlboro men good guys.

It’s never, ever, all that black and white in the world of global politics. It never is.

Even though a few days have passed since Laden’s death, and the world continues to dwell on facts and figures, theories and speculations, Pakistanis have gone back to doing the one thing that they know best: the art of survival – one day at a time.

As a Pakistani, my concern like many others like myself is not my country’s government. I have done away with wishing a tsunami takes away the lot of the corrupt goons who stand in high positions of power.

My yet-to-be-born children might never see a ‘good,’ ‘responsible’ and ‘empathetic’ government in their lifetime. So be it.

My concern is not the dual-faced Pakistani living abroad, harping about his/her country’s shortcomings and failures, nor the Pakistani apologist – the spineless diplomat who will subscribe to whatever notion just about anyone wants him/her to adopt vis-à-vis Pakistan.

My concern is not the blubbering, trigger-happy terrorist – the many Laden clones – nor the pseudo-intellectuals who avail their stamp of ‘Pakistaniat’ only when it suits them.

Not in the least.

Like many young Pakistanis, I view Pakistan as a nation bursting with much promise and rich hopes nurtured by the deprived Pakistani who has worked his/her hands and feet to the bone and still finds it within him/her to be kind and just, to live an honest life and to believe in a dawn, when the face of this country will slowly begin healing from the carnage at the hands of its irresponsible government.