Pakistan: A state in denial 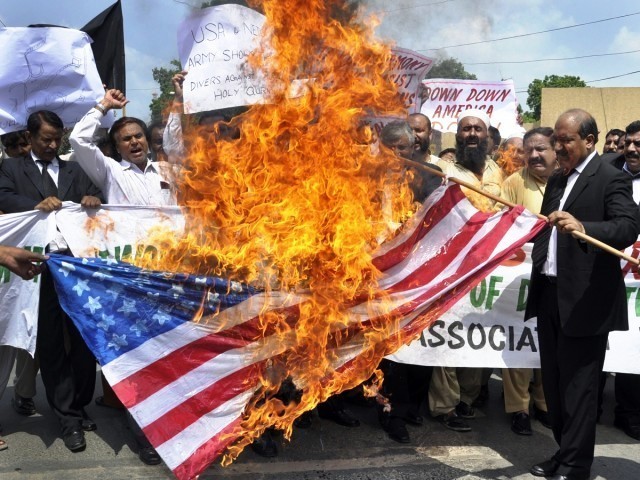 This is not the time to be led astray by emotions. This is about survival. The future lies in our very own hands.

Rather unsurprisingly, conspiracy theories have proliferated across the globe after the announcement of Osama bin Laden’s death and are fast gaining traction, especially in Pakistan where such mindless gossip is bound to press buttons for the wrong people.

Some of these rather unoriginal speculations are:

Osama is not dead.

Osama was taken alive by the US.

Osama died years ago and his body had been kept on ice for almost a decade.

Osama was killed as a pretext to war on Pakistan

Osama was given up by Pakistan.

Osama was killed to secure another term for Obama.

Osama was killed to trump Trump and so on.

Truth be told, here and now, he could have been beamed to another planet and it would not really matter.

The death or the “staged” death, whatever tickles your fancy, will not mark the end of this war against terrorism; it will not end the mulla-driven madness in Pakistan and it will certainly not stop the world from pointing fingers at Pakistan. Nevertheless, all is not lost. It can provide us with a moment of pause, to stop wasting our energy in debating or formulating ridiculous conspiracy theories and just get on with the cleansing process our country so badly needs. It is bad enough we have a neighbouring country feasting on the negative media driven propaganda, that our own people are engulfed by it as well.

We are too comfortable in our state of denial.  We conveniently place blame on the recurring villain, “America”, for all our problems. The US does not bear the responsibility of ridding us of our problems. The root cause(s) of the problems we face as a nation exist within. But before we can resolve the issues that plague our nation, we need to shoulder the responsibility of curing the epidemic of denial and apathy amongst us.

Pakistan has an enormous task ahead: tackling extremists who are deeply rooted in its communities. If put off for too long, this task is bound to become even more gargantuan and impossible to handle. We need to stop playing the blame game. Lectures on national sovereignty and international law are not going to change how the US chooses to safeguard its own interests. So why don’t we learn from them?

Look for a solution, not at the problem

Public debate and the freedom of speech are vital features of any society’s growth and advancement but it is self-deprecating to dwell on something that either happened in the past or we have no control over.  A healthy debate is enriching but surely there is a difference between obsessing over outrageous theories and having a debate on impeding issues? After all, the ultimate objective of debate and discussion is to expand our horizons and learn from the past. What have we learnt from Bin Laden’s death? Seemingly, nothing. Why not take this event as one that changes the course of history and steers us onto a path of enlightenment?  I myself have spent a considerable amount of time discussing the what’s, why’s and how’s of the Abbottabad raid. But what ought to be the purpose within discourse?

The answer is quite simple: to brainstorm possible next steps for Pakistan. Again, there is a stark difference between debating an issue and letting outrageous conspiracy theories (which may even be true) take over our lives. We are too preoccupied by our anti- American sentiments to really be focusing on the real issues. The truth is we must tackle terrorism not for anyone else but for our own country’s welfare.

As a public law academic and lawyer, I believe our country is in dire need of revising its anti-terrorism laws as well as its human rights laws. The legal framework of such laws will form the basis for further action against extremism and countering terrorism. We have had hundreds of thousands of people disappear within Pakistan who were allegedly handed over to the US and the UK authorities by our own government. There has been no accountability with regards to such actions by the Pakistani officials. We need tougher laws governing the extradition, detention and trial of terrorist suspects.

Post 9/11, countries around the world were forced to re-evaluate their existing terrorism laws. However, Pakistan ignored the issue entirely, despite the fact that it is arguably the most affected country when it comes to the wrath of terrorism. Bin Laden’s death is a much needed wake-up call. Now more than ever we need to revise or quash our existing laws and promulgate new legislation that aims to maintain the delicate balance between the prevention of terrorism and the safeguarding of human rights. With the imminent threat of terrorism looming over us, we must resign to the fact that we will have to sacrifice certain liberties for the sake of national security.

It is inevitable that Pakistan will face tough times ahead. There will be more unannounced drone attacks, bombardment of skepticism doubting our loyalty towards the counter-terrorism cause and mudslinging by opportunist countries such as India and Israel. We have little control over these repercussions.

What we can control is how we react to the overwhelming pressure and what course we take as a nation. The last thing we need is Pakistanis who are too busy formulating absurd theories, dwelling on the perceived misfortune of Pakistan and the unfairness of US foreign policy.

We have systematically failed as a state to look out for our own welfare. We must shoulder this blame and rectify the problems we face as result. We must shield ourselves from external forces who are blatantly trying to destabilise our statehood. We must also accept that we are not in a position to “shun” the Americans – not unless we want to decimate our future and become an extension of Afghanistan.

It would be foolish to put all our eggs in Bin Laden’s basket so to speak and ignore the backlash that may very well erupt like a plague across Pakistan and beyond. There is little doubt that Pakistan has been hit hard by militants who have come down from the rugged mountains of Afghanistan right into the beloved cities of Pakistan and live amongst us like ticking time bombs.

Revise attitude towards the US

Our ties with the US are pivotal and denying this would be a costly mistake. Pakistanis must shift their collective focus towards the long-term prosperity of the nation. The US government has acknowledged Pakistan’s efforts in countering terrorism on numerous occasions.  We have played a vital role in fighting the war against terrorism and we have done so because it is in our national interest.

People seem to conveniently forget what President Obama said in his address announcing the death of Osama Bin Laden. Would the President of the US have ever acknowledged Pakistan’s counter-terrorism efforts if the CIA and in-turn the Oval office suspected the slightest possibility of collusion by ISI or Islamabad? Not in a million years. Doing so would be political suicide.

The truth is, Pakistan and the US are allies, yet most Pakistanis find that hard to accept because of their blinding prejudice. These are the people who are in for a rude awakening. The fact of the matter is that we need the US more than the US needs us. We have an enemy very close to home who will continue to do what it takes to destabilise Pakistan and we cannot afford to take on a super power as well.  We must pick our battles wisely.

This is not the time to be led astray by emotions. This is about survival. New Delhi has decided as always to make hay while the sun shines by revisiting the issue of the Mumbai attacks and the alleged Pakistani involvement. It has once again labelled Pakistan as a terrorist state and the ISI as a dangerous unit that harbours terrorists. A bizarrely ironic notion considering the numerous embassies it has in Afghanistan and its sponsorship of sectarian/regional violence in Pakistan.

There is almost always more than meets the eye and it is essential to keep that in mind when deciphering issues. For instance, many of us were rather wooed by the so-called “revolutions” in the Middle East. Might I remind the wooers that these “revolutions” were hailed by none other than the default adversary, the US. Also, in case you haven’t noticed the sudden lull in news from Cairo and Tunis, nothing has really been “revolutionised.” People there are arguably worse off and if not, they are definitely not better off than before.

The media driven frenzy manipulated the truth by ignoring the underlying fact that majority of people there, did not partake in the demonstrations and only wished to revert back to their daily lives. Their livelihood was crippled as the affected cities came to a standstill during the weeks of protests. These are the people who suffered the most and are continuing to bear the brunt of it all. Sitting far away from ground zero, watching the media romanticise the ousting of leaders and killing of terrorists does not relay reality. It is owed to the seductive power of journalistic sensationalism that the grass always seems greener on the other side.

Pakistan was once a nation with a promising future. Let us not waste time any longer. It’s time to revive our founding father, Muhammad Ali Jinnah’s vision for Pakistan.

We need a revolution of minds.

Let us not day dream and leave it at that.

Let’s make this the turning point.

The future lies in our very own hands. And, it may very well be a bright one once again.

A Barrister and an Academic (BBA, LLB Hons, LPC, BPTC, M.Phil) who takes a keen interest in International Law and is currently doing research work which focuses on International law and its impact on anti-terrorism legislation.

Honouring heroes: A tribute to the men of Siachen