Greeters of Aamir Liaquat and champions of VIP culture, and PTI still claims to be an “anti-status quo” party 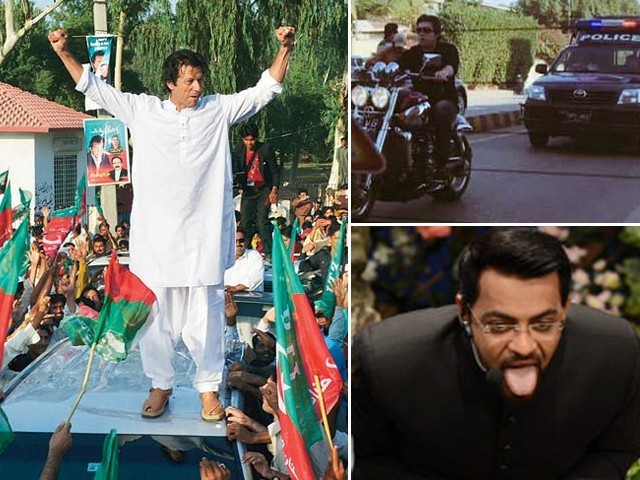 It is nothing but politics as usual – geared at getting votes at any cost without any regard for principles.

One thing which has often amused me is the way Pakistan Tehreek-e-Insaaf’s (PTI) fans use the word “anti-status quo” to describe their favourite party. As per their belief, PTI represents change whereas literally every other party represents status quo; campaigners of nepotism, corruption and of course the so-called “VIP culture”.

On social media websites such as Twitter, the behaviour of the PTI followers is worth witnessing, where they literally exalt their party and leader Imran Khan to a deity-like status and condemn other parties and politicians using abusive language.

Does PTI really represent change and is anti-status quo? To answer this question, we have to assess three political aspects – ideology, style of politics and governance.

Ideologically, PTI can be safely called a centre-right party. It represents the economic and ideological concerns of the white collar urban classes. These classes are educated and have also been successfully tutored in state-cultivated nationalism. This particular brand of nationalism fuses religious identity with patriotism and also inculcates deep mistrust of the outside world. The conspiracy theory mind-set is an unfortunate outcome of this brand of nationalism. PTI is, in some ways, the first party to articulate this brand of nationalism effectively. In fact, Imran’s political rise owes a lot to his “tireless” campaigning against drone attacks and his constant vilification of the US during the peak years of the Afghan war.

In this way, it is different from Pakistan Peoples Party (PPP) and Pakistan Muslim League Nawaz (PML-N), but whether it is ideologically an anti-status quo party is a different question altogether. In fact, PTI has ended up strengthening the status quo by promoting this brand of nationalism much better than the other two mainstream parties.

Rather than promoting a liberal and more inclusive brand of nationalism, PTI leaders like Ali Muhammad Khan have publicly stated that Pakistan should be a theocratic state, and those espousing any liberal or secular Pakistan, should leave the country. Imran, on the other hand, has gone to the extent of calling liberals the scum of this country.

Besides nationalism, ideologically, PTI’s position on other issues like gender equality or women rights is thoroughly reactionary. PTI opposed the Protection of Women Against Violence Bill in Punjab despite the fact that it claims that it has brought women into the political atmosphere. Yes, I give full credit to the fact that PTI has encouraged women to participate in political rallies but women emancipation is much more than that. If you vote against bills which are supportive of women rights, then to be honest, you are not an anti-status quo party.

Second major aspect is the style of politics. Frankly, PTI is a throwback to the 90s style of politics. During that time period, both mainstream parties, PPP and PML-N, tried to undercut each other and constantly indulged in politics of needless agitation. Over the years, both parties have matured, and despite their obvious differences, have become aware of the dangers of such politics. They have understood that shortcuts don’t work and in the long run, their best bet is to stick with democracy and electoral route.

Unfortunately, the same cannot be said about PTI. Their 2014 agitation was nothing but a desperate attempt to persuade the “umpire” to raise the finger. Following that, PTI has constantly taken a non-democratic route, and instead of appealing for votes, it has tried to look towards other methods to dislodge its opponents. By doing that, PTI is doing nothing for the democratic progression. It is merely repeating what PML-N and PPP previously used to do in the 90s. While both of these parties have matured and moved away from that style of politics, PTI is embracing it now and with even greater zeal.

But the most astonishing development is of controversial anchor Aamir Liaquat Hussain, who has recently joined PTI. He is famous for hosting tasteless, offensive and rather obnoxious talk shows. He is an uncouth attention grabber and has been quite rude to even his own guests many a times. He is a charlatan and someone who takes pride in fooling people. But his worst attribute is his bigotry. This is an individual who has openly incited violence against minorities and has hurled blasphemy allegations on individuals without even giving a thought about the possible grave consequences.

But somehow, PTI and hordes of its impressionable members are okay with that. They have little to no concern about the fact that it reflects poorly on their party if bigoted individuals like Hussain join it. All that matters to them is that he may be able to snatch some muhajir votes from Muttahida Qaumi Movement-Pakistan (MQM-P). It is nothing but politics as usual – geared at getting votes at any cost without any regard for principles – and yet, according to PTI fans, their party is somehow against the status quo.

Third aspect is their style of governance. Here, I would like to start with PTI’s so-called crusade against VIP culture. On social media, their followers have been constantly accusing others of espousing VIP culture and the party has constantly made tall promises to curb it. However, the reality, as usual, has played out differently. I still remember the sight of PTI’s Faisal Vawda using an army of police protocol while riding his heavy bike on Zamzama, Karachi, while the general public had to suffer and wait for Vawda to cross – if anything, this is openly mocking the party’s tall claims of shunning VIP culture. The decision to construct a swimming pool in Khyber Pakhtunkhwa (K-P) Chief Minister Pervez Khattak’s house, despite the fact that it costs around Rs18 million to the provincial exchequer, is another testimony to the hollowness of PTI’s tall claims. Though the construction was subsequently cancelled, however, it was done only after a lot of public hue and cry.

Most recently, I came across another statement by K-P’s provincial minister, Inayatullah Khan, which completely dumbfounded me. According to him, elected representatives should be allowed to use sirens and hooters on their vehicles. His rationale was that if police could use them, the elected representatives should also be allowed to do so. This was an absurd statement as hooters and sirens are globally used by emergency vehicles and law authorities to ensure that traffic does not obstruct their response to various emergencies. Trying to say that elected representatives belonging to PTI or some other political party should be accorded the same rights and privileges is plain absurd. Furthermore, it also negates the party’s claims of reducing official protocol.

For the past few years, I have been hearing from various citizens and on talk shows about how the K-P government was focused on development and important issues such as education, police and health, rather than indulging in “gimmicks” like metro bus project. In his opinion, those projects were nothing but shallow attempts to win votes just before the elections. After years of ridiculing such projects, it is ironical that PTI is also initiating a similar project in Peshawar, just when elections are a few months away! Somehow, when PTI invests in such projects, they are not gimmicks or status quo politics.

To be fair to PTI, they have improved services in K-P and introduced good reforms in health and education. However, their claims that they are completely an anti-status quo party in governance, have to be taken with a pinch of salt.

My sincere advice to the PTI fan club is to stop using the term “anti-status quo” to describe their favourite party, because that really isn’t the case in reality.