Yes, Richard Spencer is a racist, but the US is still a democracy governed through a system of checks and balances 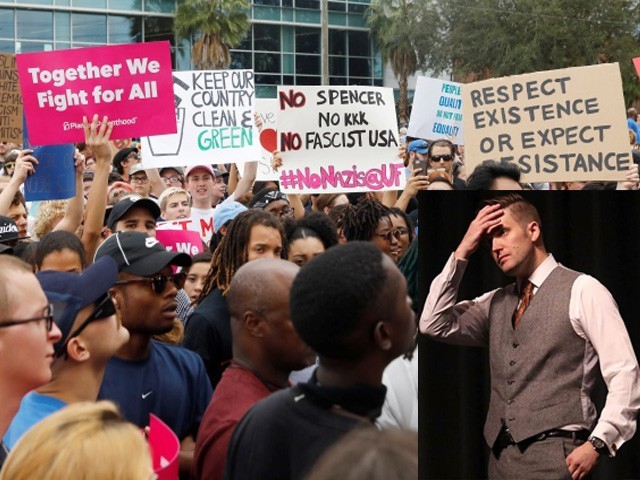 (L):Demonstrators rally before the speech by Richard Spencer on the campus of the University of Florida in Gainesville, Florida on Oct. 19, 2017. PHOTO: REUTERS (R): Richard Spencer, a leader of the so-called alt-right movement was one of the organizers of the August march in Charlottesville, Virginia, in which a far-right supporter drove his car into a crowd of demonstrators, killing a 32-year-old woman. PHOTO: AFP

Richard Spencer, an American firebrand and a symbol of the alt-right movement in the US, recently delivered a speech at the University of Florida campus in Gainesville, Florida. Spencer’s prior claim to fame was leading the white supremacist rally in Charlottesville, Virginia. That rally ended in violence leaving an outright clash between Spencer’s followers and counter protesters.

Spencer is known as a champion of white supremacy. When he announced that he was coming to Gainesville to deliver a speech, the university panicked. Initially, they tried banning his speech. Spencer countered by threatening to sue the university. He argued that he was allowed to speak under the First Amendment of the US Constitution which allows freedom of speech. As such, the university couldn’t ban him, but took several strict security measures to ensure that Gainesville didn’t turn into another Charlottesville. They succeeded in preventing any direct violence but what is worrying is the notion that they had to go to such lengths at all. Spencer went as far as saying that he was flattered that the level of security provided for his visit was as if it was protection against “hurricanes and invading armies and zombie apocalypses”.

University of Florida has given Richard Spencer full control over which journalists will be allowed inside the venue to cover his speech.

Just so we're clear:
In Germany, Richard Spencer would not be holding rallies.
He would be serving a prison sentence.
That is a GOOD thing.

The kicker is that Spencer had gone to Gainesville to deliver a speech on the topic of freedom of speech. The university fussed around his visit and made the event into a spectacle. In fact, because of the advanced security and protesters, he spent most of his time defending his alt-right world views.

Truth be told, over the course of the past 18 months or so, the expression ‘alt-right’ has become a norm in American lexicon. The term may have existed before but it has been the ascent of Donald Trump and his conservative world view that has ignited and empowered white supremacy. Alt-right, now we know, consists of people that hold far-right ideologies and favour white nationalism. With the success of Trump, this group of people has been emboldened and has them crawling out of the woodwork.

First of all, America takes its constitution very seriously. There are certain rights that all Americans are guaranteed by their constitution. The freedom of religion, the freedom of the press and the freedom of speech are all inalienable rights for all Americans. These are the very notions that have everyone on the planet flocking to the US, irrespective of caste or creed. These are also the points that allow Spencer to speak up about his views openly and without fear of incrimination. The danger is in the fact that his followers may take his words as a battle cry against the diversity that America represents.

There is no doubt that Spencer is a racist. Some of his followers might even have Nazi tendencies. After all, many of them have been known to publicly expose the Nazi swastika and declare their allegiance to it. Calling out America as a fascist state may be overstating it. The US is still a democracy that is governed through a system of checks and balances. It does not matter who the president is or which way he leans conservatively, it is near impossible to act out Neo-Nazi tendencies through national policies. As a matter of fact, a free press ensures that even if a political leader holds conservative views, these views are immediately challenged and rebutted by an active media.

On Thursday, white supremacist Richard Spencer spoke at the University of Florida.

Hundreds of protestors barely let him get a word in: pic.twitter.com/GpMctUEZRK

Chants of IT'S YOUR FAULT goes up as Richard Spencer talks about Heather Heyer, killed in Charlottesville #SpencerAtUF pic.twitter.com/T22t2MZyOA

#UF #RichardSpencer #Florida #nonazisatuf Those planning to counter protest: PLEASE try to get clear pics of Nazis so they can be exposed ✌️

Richard Spencer spreads a radical ideology that puts Americans in danger! How is he not a terrorist?

In the context of Pakistan, or even the general Muslim world, reality is still more acceptable than the current state of affairs. Religious zealots are a dime a dozen and are uneducated to boot. This lot is likely not even aware of any constitution that their countries have, let alone the rights it guarantees them. In fact, the hate and bigotry spouted out by these so-called packers of religion incites something even more dangerous than plain black and white racism. They pit Muslims against the infidels (you can define infidels any way that is convenient; they may even be other Muslims if your religious clerics tell you so).

Freedom of speech does have limits. For example, in the US, it is borderline immoral and a cause for raising red flags with the intelligence agencies if one berates 9/11. In the West in general, saying something mildly critical of Jews can be blown up into an anti-Semitic rant. The mere use of the derogatory N-word is deemed as offensive to African-Americans. In Pakistan, anything that is even mildly perceived to be not in accordance of Islamic laws can be made into a case for blasphemy. In such cases, this becomes more of a case of respecting a country’s beliefs and laws as opposed to saying whatever pops into ones head under the guise of freedom of speech.

If UF can afford to spend half a million dollars on security for Richard Spencer, why can’t they afford to challenge him in court and just lose the case? Also, is it freedom of speech if it’s infringing on my freedom to walk outside without fearing for my life?

Its pretty scary seeing richard spencer at uf its a shame he can even be there pushing his rhetoric but he has freedom of speech :/

Coming back to Richard Spencer, racism and bigotry have existed since time immemorial. There has been no nation in history that can claim to be free of these elements. At this current juncture of American history, it is something that has come forward into the lime light due to a conservative ruling government. Events like Charlottesville and Gainesville weren’t the first ones in American history and won’t be the last. However, if the polarisation of the world continues due to shifting economic patterns and increasing xenophobia, such events may increase in occurrence.