BJP is to India what the Taliban are to Afghanistan 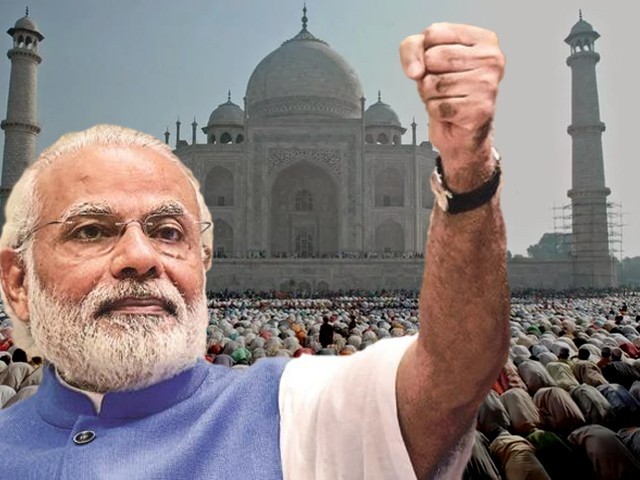 The Taliban government in Kabul during the 1990s had become symbolic, not only of political barbarity, but also of great cultural intolerance. They wanted to obliterate all the symbols present in the country that did not relate to its Islamic history and culture. The destruction of the Bamiyan Buddhas – which symbolised the epitome of Afghanistan’s history and heritage – was a brutal extension of that mentality.

Today, India’s ruling Hindu party is besieged with a similar sectarian outlook. It displays an obsession to turn India into a Hindu nation, side-lining its other cultural and historical diversities. This fixation is so pronounced that it is shockingly beginning to resemble the worldview of the Taliban government of the 90s.

The ruling Bharatiya Janata Party (BJP) and its patron, Rashtriya Swayamsevak Sangh (RSS), are more focused on changing the country’s secular culture and edging out India’s Islamic heritage and history than they are on actual governance.

Therefore, when BJP legislator Sangeet Som called the Taj Mahal – which is not only India’s most popular tourist destination but is also the seventh wonder of the world as well as a UNESCO Heritage Site in India – a “blot on Indian culture” built by “traitors”, this statement was not simply an off-hand comment by an unhinged mind. On the contrary, it reflects the thinking of India’s ruling party.

Som, who is known for his anti-Muslim rhetoric, made these statements a few weeks after the controversial decision by the Uttar Pradesh (UP) government to delete the Taj Mahal from the tourist map of the state. It was disappointing, but not unsurprising, to see no condemnation from the national leadership of the BJP. A party spokesperson almost justified the declaration by acknowledging that one cannot stop the people from making statements. Senior BJP leader, Vinay Katiyar, made things worse by claiming it was really the “Tejo Mahal”, Lord Shiva’s temple, which was converted by Shah Jahan into what we now see as the Taj Mahal.

Opposition leaders, on the other hand, were up in arms against the ruling party for this openly divisive reading of history. They pointed out that if the Taj Mahal is an Islamic creation, so are many popular sites, like the Red Fort and the Qutub Minar, amongst others. Will the BJP government stop hoisting the Indian flag from the ramparts of the Red Fort on Independence Day, because they have such a problem with Islamic heritage? Or print new 500-rupee notes since it has the Red Fort printed on its back?

The fact remains that millions of people visit the Taj Mahal every year and it is undoubtedly the most attractive tourist destination for anyone visiting India for the first time. The revenue from tourist visits to the monument feeds millions of families of all faiths.

The Taliban viewed the Buddhas of Bamiyan simply as a remnant of Afghanistan’s Buddhist past, never as a historical heritage for the nation. Similarly, the BJP only sees the Taj Mahal as a symbol of Islam and a part of India’s Islamic history. Such views are rooted in their sectarian reading of history, and betray their political agenda – which is to turn India into a Hindu nation. These attacks on the Taj Mahal are part of that wider agenda.

If middle class India or those who voted for Narendra Modi think that the man and his party are concerned about India’s economic development, then they are living in a fool’s paradise. Development is just a slogan for Modi – his real agenda is to alter the ethos of the country and define the nation from the narrow prism of the religious majority.

It is thus unsurprising that ever since Modi has come to power, there has been systematic marginalisation of India’s religious minorities, particularly its Muslims. The ban on cow slaughter, the mob attacks for the crime of alleged beef possession, the obsession with love jihad, are all part of a design to push the roughly 14% and growing Muslim population of India into the margin of society. It is an attempt to create a narrative where Muslims are treated as outsiders and aggressors and thus not part of the Indian culture, which will eventually be synonymous with the Hindu culture.

This is why the ruling establishment is always clashing with history, and there seems to be a serious attempt to present the country’s history and past from a Hindu perspective.

Recently, in the western Indian state of Rajasthan, the local BJP government brazenly approved a change in history books to declare Maharana Pratap the winner of the Battle of Haldighati, which was fought against the Mughal emperor Akbar in the 16th century. History tells us otherwise; that Akbar defeated the King of Mewar, but the BJP allowed this edit in another attempt to pander to the extremist Hindu narrative.

What is interesting to note is that this was not a battle fought between Hindus and Muslims; it was a fight between two rulers for political dominance. These rulers just happened to belong to two different faiths. Akbar’s army was led by a Hindu chieftain while there were many Muslim soldiers who lost their lives fighting for Pratap.

This communalisation of history is being done in a systematic way by the BJP, both in Delhi and in other regions where it is the dominant party. Secular textbooks are being replaced by rabidly sectarian ones that focus mainly on Hindu motifs and tell stories from the Hindu perspective – a dangerous phenomenon in a country where a significant chunk of the population is not Hindu.

A Muslim family was attacked because they were rearing cows and running a dairy business. The Hindu extremists got riled up and attacked them, calling them beef eaters, with no proof whatsoever. Such attacks keep growing in number, and are part of a game plan to isolate Muslims from mainstream society and demonise them in order to turn public sentiment against them more than it already is.

The Rohingya Muslims in Myanmar are a victim of a similar narrative. Decades of systematic propaganda against the Rohingya Muslims by the ruling regime created a divide that ultimately left the minority group as the enemy and the outsider.

The present Indian government and all its cultural and ideological wings are aggressively pursuing a policy of creating a false narrative and projecting a biased history so that India’s Islamic symbols and its followers are portrayed as the enemy.

In light of this, the Taliban’s destruction of the Bamiyan Buddhas and the BJP’s attacks on the Taj Mahal are not two eerily similar yet unrelated episodes, they are part of the same mentality. The Taj Mahal is not just a tourist spot – it is a part of India’s identity. So are many other monuments, including the Agra Fort, the Qutub Minar and the Red Fort. Will the BJP attack them all?