A question of religion 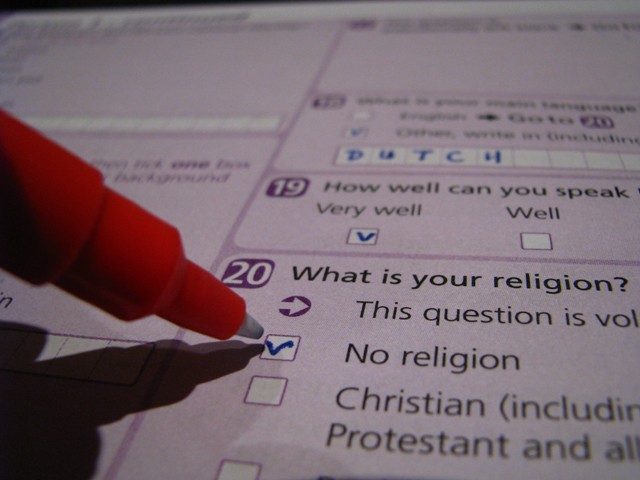 While in the UK, the question of identifying one’s religion on a census form may be a cause for uproar, in Pakistan our entire selfhood is determined by the doctrines we profess adherence to.

A furore was recently raised in the United Kingdom (UK) over the voluntary religion question in the 2011 census. Humanists and secularists attacked it for being ‘fatally flawed’ because the information, according to them, can be used to influence public policy and services.

For anyone living in Pakistan the outcry might seem a smidgen over the top, given the country’s strident penchant for religiously determined identity systems.

Here almost every conceivable form or questionnaire comes replete with a doctrinal question. For example, anyone wanting a passport has to first declare their faith of preference. Need an ID card? Then identify yourself as a Christian, Muslim, Hindu or other. Even for the purposes of opening a bank account one has to first confirm their belief system – of course – in this instance some Muslims would dearly love to be considered non-Muslims so as to be allowed to keep their share of the dreaded usury, but that is another matter entirely.

Just so you are aware, the official line is that all this is done to help protect the status and rights of Pakistan’s minorities. Fair enough, some might say – but one question still looms large – protect them from what exactly. Discrimination? Maybe not, especially when one considers Pakistan’s appalling human rights record against minority groups at both a state and non-state level.

Political disenfranchisement, random acts of violence and social and economic prejudice are the everyday norm for marginalised communities. More harrowing is a growing trend of abducting girls belonging to minority groups. In 2010, 71 Dalit Meghwar families belonging to the Aakalee village left their ancestral home in protest of the abduction of a 15-year-old Meghwar girl. It was alleged that she was forced into marriage with a prominent Muslim.

Last year’s floods further highlighted the hideousness of the bigotry that blights the country. In interior Sindh, Hindu flood victims were attacked and looted and at the same time, in South Punjab, some 500 Ahmadi families were refused shelter by government workers and local clerics.

Well tell that to the Christians of Gojra or the Ahmadis of Lahore – two communities that were butchered at the hands of religious extremists.

Perhaps then it is to safeguard their rights and freedoms? Wrong again.

Pakistan’s pernicious blasphemy law ensures that minority groups necessarily exist outside the purview of the law simply on account of their professed beliefs. Since 1986, 30 people have been killed extra-judiciously after allegations of blasphemy were made against them – all of them belonged to minority groups.

The case of the Ahmadis is particularly galling. Not only do Pakistan’s laws seek to prevent them from calling themselves Muslims (even though if you speak to any Ahmadi they will say that they firmly consider themselves within the pale of Islam), but they are also prohibited from ‘posing’ as Muslims or participating in Islamic activities. Ludicrously, if an Ahmadi says salam he or she is committing a crime despite the fact that it is the only common greeting in the country. Similarly, any Ahmadi with a Muslim name is liable for arrest and a three year prison term – no respect for ‘minority’ rights there then.

Maybe, just maybe then, religious columns are meant to protect minorities from themselves? Nah, we really are clutching at the old proverbial straws now.

While in the UK, the question of identifying one’s religion on a census form may be a cause for uproar, in Pakistan our entire selfhood is determined by the doctrines we profess adherence to. It is one thing to inquire into a person’s beliefs for the sake of statistical analysis, but quite another when it is done to effectively marginalise some groups and confer privilege on others.  To define and then harass people on the basis of the vague definition of what religion they owe allegiance is not a thing to be proud of.

Human rights are exactly that – human rights – they have nothing to do with a person’s race, creed or politics or beliefs. Alas, the people at Metro seem to be the only ones who still understand this.

A British freelance writer and photographer based in Pakistan. His worked has been published with Foreign Policy Magazine, The Huffington Post and The National among others. He tweets @usmanahmad_iam (twitter.com/UsmanAhmad_iam?lang=en) and you can see his work on his website usman-ahmad.com.

#IStandWithAhmadis because those who don’t cannot stand with Shias, Christians, Hindus, Parsis or each other

After Osama: The war continues

The futility of justice: Was the movement in vain?