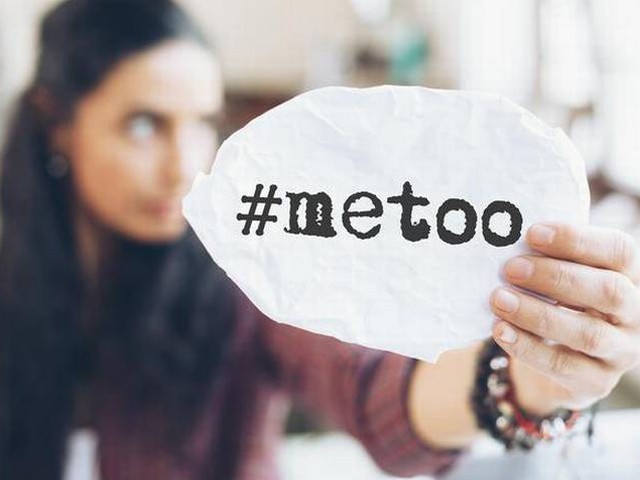 The hashtag went viral after American actress Alyssa Milano tweeted it to encourage more women to come forward with their experiences with sexual harassment. PHOTO: THE HINDU

Social media is surreal most of the time; however, this past week has seemed more unreal than usual. My timeline on every social media platform has been flooded, or dare I say bombarded, with #MeToo status updates, tweets and posts.

The hashtag went viral after American actress Alyssa Milano tweeted it to encourage more women to come forward with their experiences with sexual harassment, in response to the Harvey Weinstein scandal that shook Hollywood.

If you’ve been sexually harassed or assaulted write ‘me too’ as a reply to this tweet. pic.twitter.com/k2oeCiUf9n

My feelings on this hashtag, which has been trending all over the world, can at best be described as mixed. On one hand, it’s gratifying to see the courage displayed by most women in standing up to their aggressors and open up about what they have faced. On the other hand, however, I feel deeply saddened. To see all the strong, independent women I have ever known admit to being victims in one way or another reveals terrifying truths about the reality of misogyny and harassment.

After the story broke and the allegations against Weinstein piled up, he lost his job and his membership was revoked by the Academy. But he is just one predator, just one rapist, just one harasser. The list is endless, growing by the second; growing even as I type this. Weinstein is just one beast in a sea of monsters. The number is so high, it feels pointless to even try and count.

Every time I let my guard down, everytime I'm not vigilant enough, they give me days of regret and everlasting nightmares.

As a child. As a woman. At some homes. At the work place. While commuting. #MeToo

While I am glad that many women have had enough and are finally speaking up against the system, it breaks my heart to think of those women do not have the courage to walk out of the closet and even whisper in a loved one’s ears about the brutality this world has shown to their bodies and their souls. Instead, they continue to stay mum and cover themselves with thick sheets on the outside, not letting anyone see the inner turmoil they struggle with every day.

They say that times change, people change. I feel this statement misrepresents the truth. In reality, only the faces change. As much as the world has progressed and women are now making their mark in every field of work, many things remain the same. The same lustful stares, the same groping hands – consent remains a dream that may never come true.

Growing up in a traditional Muslim, Pakistani household, girls like myself were religiously taught to cover ourselves properly. As a little girl, I was told to cover myself with a sheet even during my sleep. I was expected to sit and walk in a certain manner, to avoid any possible interaction with the opposite gender to the best of my ability, and call a boy “bhai (brother)” instead of friend. After all, following these set guidelines is directly related to one’s future husband finding her desirable. Men and their families in our society prefer “pious” girls who have had none to limited interaction with na-mehrams as girls who do have male friends and associates are considered “morally loose”.

If a man harassed me, be it in public or private, I was instructed to stay quiet and not create a mountain out of a molehill. Even though I was constantly reminded that I was the “weaker sex”, the honour of my family also rested on my fragile shoulders. Needless to say, growing up as a woman can be quite confusing, especially in our society at least. Protecting your honour becomes your ultimate responsibility, and yet nothing you ever do can prevent you from “losing” it.

I am, thus, choosing to not risk my family’s honour by participating in the #MeToo campaign.

I often wonder if there is a woman remaining in any part of the world who has not been subjected to the cruelty of abuse and harassment. It distresses me further when I think of other women out there who, like myself, do not have the courage to even use a little hashtag; the fear of social persecution outweighing the liberty that surely follows once the heart lets go of secrets you have shamefully held on to. Victim-blaming is, unfortunately, as real as the harassment itself.

Maybe I can sneakily peek through this self-imposed cage and whisper to the entire world and tell them, #MeToo. But what if my family’s honour, whose coffin in fact rests on my shoulders, is fragile enough to crumble? This ‘what if’ stops me from taking the plunge.

Because why should I speak up?

Why should I speak up for the little girls who are scared to tell their mothers about the uncle who visits their homes once a while and pinches them twice under their skirts?

Why should I speak up for the girls who are groped in busy bazaars by unknown hands?

Why should I speak up for working women who can never stand up to the bosses or colleagues who cross a line?

Why should I speak for the women travelling on public transport who are “accidentally” touched every now and then?

Why should I speak for the wives who stay silent as their husbands transform from a fairy tale Prince Charming to their own personal monsters?

Why should I speak up for all those women who speak up for themselves but are bullied and harassed even more for being brave and courageous enough to come out?

Why should I take the risk and sacrifice the honour I have painfully held on to my entire life, only to be slut-shamed and victim-blamed for the rest of my life?

I can’t. I choose not to. I am not Alyssa Milano.

Despite being prey to a vulture that is fed by our inherently sexist society, I choose to stay silent.

I sometimes have this irresistible urge to stand up and scream, at the top of my lungs, the names of all those who have wronged me. I can’t describe how badly I want to call out the guard at my house when I was just seven-years-old, or all those relatives who thought I wouldn’t understand what their discreet pats meant. I want to finally put a name to all those hands and eyes that have felt comfortable to look and touch me as they please. There are moments where all I yearn for is to scream it all out.

But I can’t. I neither have the courage nor the ability to take that plunge.

I'm not ready to share my own story yet, but I support and believe in those women strong and brave enough to share theirs. #metoo

Every person out there who is speaking up and braving the consequences, they are all my heroes. But the rest, like me, who are silently whispering #MeToo, they are my heroes too. Like countless other victims, I am scared. I wish we could all be courageous enough to speak up without fearing that things will only get worse for us, the victims.

Perhaps one day. But today is not that day.