Irfan Bhai and his solar eclipse 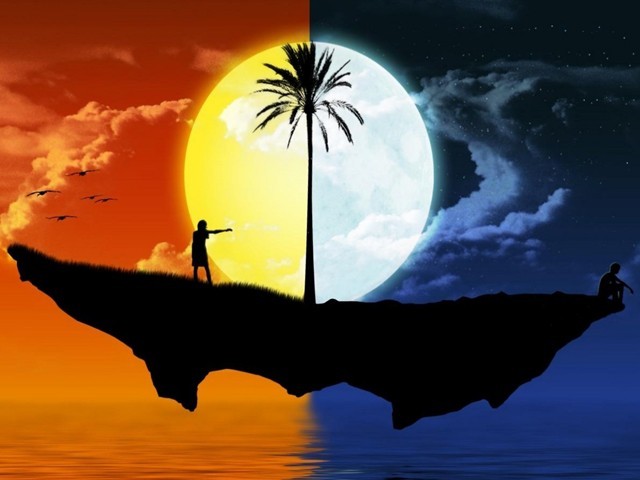 She was like a hand full of sand, the more he tried to hold on to her by squeezing his fist, the more she seeped out. PHOTO: PINTEREST

“I really need to beat Amir’s high score,” I said to myself as I played another round of Temple Run, not realising my battery had drained down to 5%.

My phone got warmer and the LED light on my screen began to blink red. I turned on the battery saving mode and slid my phone in my pocket. I looked out my car window only to realise that the car had not moved an inch. I guess I’m just not used to Karachi’s traffic anymore, and a 20-day visit is not even minutely enough to adjust to it.

After being thoroughly engrossed in my phone, I looked around to see exactly where I was. I challenged my knowledge of Karachi’s streets. Four years in Toronto should not stop me from remembering my roots and it certainly didn’t. I was on Shahrahe Faisal, the heart of Karachi. The evening had begun and Karachi’s sun had started to set. I could literally feel the weather cool down. The sky began to fade into an orange colour, marking the end of the evening. There was bumper to bumper traffic with rickshaws and motorcycles flooding the avenues. It would be quite a ride as there was no sign of it clearing any time soon.

There was no radio in my friend’s car and silence had begun to take over the loud noises that seeped in from outside. It was at this point that I started a conversation with my friend’s driver, Irfan Bhai. I wanted to know how he came about to do what he does.

Irfan Bhai was a fairly tall and skinny guy with dark skin. He wore the traditional white shalwar kameez, a Casio watch and pointed black Peshawari sandals. He surely would have been quite good-looking back in his day. I asked him how life was.

He asked me how life in Canada was and if the cold had bothered me yet.

He nodded his head and said nothing else so I continued talking.

“I just got into university, you know. That’s why we moved to Canada. That’s why most people migrate, right? For a better life?”

At this point, we had just crossed Bahria University. Irfan Bhai took his eyes off the road and gazed at it for what felt like minutes but was only a moment. He looked at the university with a deep passion, his eyes widening. He looked away and then looked straight at the rear-view mirror so he could make eye contact with me. His eyes were telling a story of their own.

“I used to go here a long time ago,” he said. “I was studying to get a business degree so I could one day be able to support my younger siblings and hopefully marry off my sister.”

I was confused to hear this at first. My curiosity began to brew and I had so many questions in my head, but before I could ask any of them, Irfan Bhai resumed talking.

“I had an outstanding GPA in my first year and as a result, I qualified for many scholarships. I met a girl here who was in the same program as me.”

His eyes began to wander again.

“We exchanged numbers and became friends right away. It’s like one of those instances when you meet someone and things just suddenly click, you know? Our relationship grew. It took a life of its own. We would be with each other all day on campus and we would talk for hours on the phone once we got home. We were virtually inseparable.”

He paused. Maybe he was trying to remember what used to be, or maybe he was fighting away a tear, but when he started talking again, his voice was hoarse.

“Well, one thing led to another and we fell in love. Madly in love actually, to the point where we could only discuss getting married, living together, having babies and being genuinely happy. To be happy with each other’s presence without all the materialistic stuff.”

Irfan Bhai told his anecdote with such intensity and passion that in that moment, I couldn’t care less about Karachi’s traffic that we were stuck in. I actually hoped that time stopped so I could keep listening to him talk.

And he talked and I continued listening.

“Even though we spent so much time alone, I never had any ill intentions for her. I never intended to do anything that was considered ‘unlawful’ in our society. So, after dating each other for two years, we felt like it was time to finally get our families in together so we could get married. I had two years of schooling left and so did she. I thought by the time we graduate, we’ll only have the official ceremony left to do. We had made our plans but little did we know that God had his.”

Things were going far too smoothly in Irfan Bhai’s love story. His tale sounded like there was only smooth sailing but I knew it was too good to work out in the end. This wasn’t some fairy tale. This was real life where things hardly ever play out as we plan them to. Hurdles, set-backs and barriers are what make life. Similar to the traffic we were stuck in, uncalled for and inconvenient.

“Her father had strict reservations regarding me, questions that any concerned father would have before handing his daughter away to a man he had just heard of.”

“How is this 21-year-old jobless man going to feed you? Where is he going to keep you – he doesn’t even have a home of his own yet,” her father inquired, having a puzzled look on his face.

To be fair, they were questions that any caring father would ask.

“She tried her best to convince her parents, she really did. There was no issue from my side as I had managed to talk to my family and they had agreed with my proposal. After finding out about our relationship, her father told us to distance ourselves from each other. But we disregarded that and continued seeing one another anyways. Telling us to stay away from each other was like telling a fish to stay out of water. It simply could not have been done.”

I loved the analogy he used. His words captivated me even more by each sentence he uttered.

I expected to have tears of joy run down my face as I waited for him to tell me how he married the love of his life with her father’s blessings, since he satisfied his every demand. I was expecting my faith in love to strengthen by many folds. But it turned into disappointment quite instantaneously.

Irfan Bhai tightened his grip on the steering wheel. The car was stuck in the midst of traffic. We couldn’t go forward, there was no way back and the exit was too far from sight.

“I knocked on her door and her brother came to answer. Moments after, I found out that she was gone. Her father had wedded her off with some relative of hers from the village they belonged to. It turned out that me not having a job or a home was never the problem. Her father just did not want her to marry me. It was as simple as that. I couldn’t believe it at first. I tried calling her for many days but to no avail. Then one day, her husband picked up and threatened me to never call again as she was happily married.”

“But I knew that was a lie. She couldn’t have been happy, not with that stranger she had just married. I couldn’t believe she was gone. I was heartbroken, dejected and was left miserable. I had sacrificed everything for her. With a blink of an eye, my education, my future and my career had all gone down the drain. I had made decisions that were irrevocable and I left myself without any chance of redemption and knowing all that, I had to live with this for the rest of my life.”

The traffic moved on and so did Irfan Bhai.

It seemed as if Irfan Bhai tried his best to cling on to her but she was more like a hand full of sand, the more he tried to hold on to her by squeezing his fist, the more she seeped out.

“I’m married now and I have two kids that I love dearly. Not a day goes by where I don’t think about her. Even after all these years, my eyes look for her, search for her everywhere I go, every road I drive to. There’s this voice in the back of my head that tells me that I just might bump into her ,through some strange coincident.”

I thought to myself at this point that in a city like Karachi, with a population that is beyond 15 million, this man is in search for this woman he once loved with all his heart.

As my house arrived, I told Irfan Bhai to stop the car outside my gate. I thanked him. Not for dropping me off but for telling me his story, which had shaded me under its dark cloud.

I came home, sat in my balcony and pondered. I had once read somewhere that God had created all of us in pairs. Maybe Irfan Bhai and his lover were created together but just like the sun and the moon, which were also created together, were not made to be together. There’s always a distance between the sun and the moon but Irfan Bhai still waits. He waits for the solar eclipse as he would also one day, against insurmountable odds, cross paths with the once love of his life.

The author is a Pakistani Canadian who is a student of Business Management at the University of Toronto. He tweets @AhmedBSyed (twitter.com/AhmedBSyed)