Bujayote: The future of Pakistan’s musical valley may be bright, but the future of their music is dark 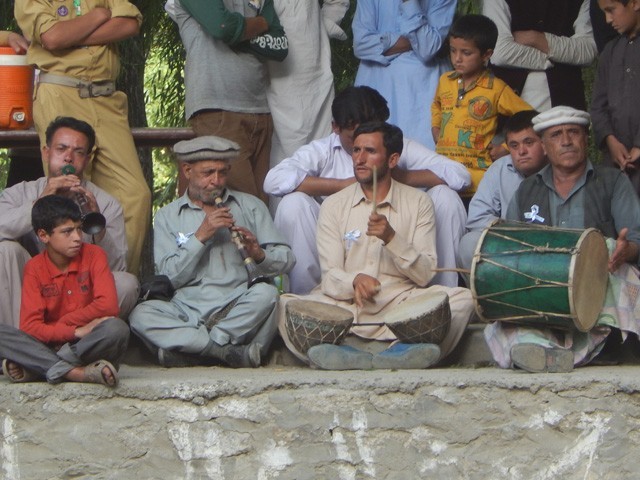 The instrumentalists earn their living by performing in musical events at different occasions varying from social, cultural, political to even religious festivals. PHOTO: BASHARAT ISSA

In the extreme north of Pakistan, a small area located in Yasin Valley known as Bujayote, is the home of traditional musicians. According to these artists, this name is associated with one of the very early musicians named ‘Bujaye’, a professional, whose generation pursued this profession.

The area is also locally known as “Ustadishoo Deh” which literally means the neighbourhood of the musicians. Yasin Valley is one of the many mountain-locked valleys in the extreme north of Gilgit-Baltistan.

The instrumentalists of Yasin perform in a set group of more than three. One of them plays a pair of kettle drums locally called Damama, using two short and straight wooden sticks, while the second plays a cylindrical double-headed drum using his hand on one side and a curved stick on the other side. This instrument is locally known as Dadang. The third plays a wind instrument, like a pipe or a flute but with a different structure and sound, which is locally called Suranaye. There can be more than one player for the third instrument.

Using these instruments simultaneously at a time, they play different tunes to which people dance. Each tune produced by them has a specific name and the dance performed on the music has particular, fixed steps.

Currently, the music is a symbol of joy and celebration. The instrumentalists earn their living by performing in musical events at different occasions varying from social, cultural, political to even religious festivals. They charge a certain amount per hour.

Though these individuals are well known in the village and even outside the village, however, at the same time, there exists a discriminatory attitude towards them. Since they are settled in a small area in the village for many years now and have continued the profession, it is not only them who face the discrimination but the whole community. They have been associated with derogatory terms like Dom and Bericho (both the terms usually connote undertone discrimination) and have been seen and dealt as a lower-ranked community.

Most of the musicians now don’t allow their younger generations to learn this art because of the way they are identified in the society. The existence of music and that too within this community and in their neighbourhood has become a basis for the stigmatisation of the community and the profession. It comes as a surprise to them that everyone loves the music and loves to perform to it but the ones who produce the music are seen as inferior in society. In response to the stigma, the community preferred to reconstruct their history in order to gain a respectable status and also resist by discontinuing the music, which became a source of a negative identity that the community rejects. 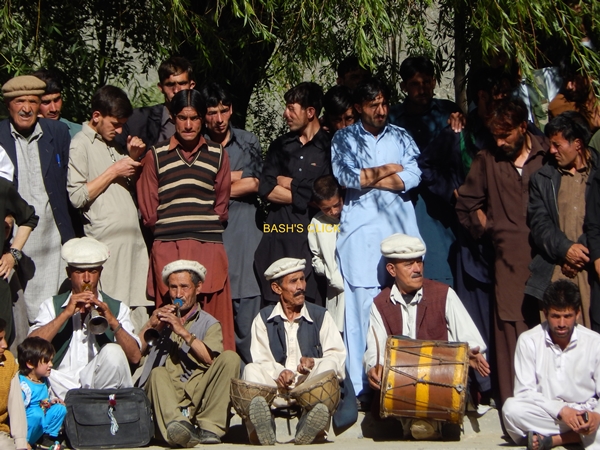 A group of the musicians. Photo: Basharat Issa

Today, many of the families draw their connection with some of the earlier tribes in the region as most of the families have migrated from different valleys in Gilgit. To counter the stigma and status presumed by others, the musicians also emphasise on the process of making the instruments. The process takes place in a formal event where religious and sacred terms are used while making the instruments.

The way they determine, consider and even present their identity shows how much the community has suffered. Their struggle and resistance against this stigmatisation is evidence of the discriminatory attitude of the people towards them. At present, there are a few set groups of the musicians, most of whom are old men ageing above 60 years. There is hardly a single set group that is comprised of young talent.

This musical tradition can only survive if the stigma attached to the music and the community ends. This would allow them to express their identity without any fear and resistance and they would feel secure and respected in the wider society. Otherwise, Yasin Valley will soon lose a unique musical tradition and this would cause huge damage to the social and cultural fabrication of the society. Not only these talented individuals but the people of Yasin Valley are waiting for an intervention of relevant organisations to save the indigenous musical heritage of the valley.

The author is a student of Social Anthropology at London School of Economics and Political Science and is a social activist passionate about the unrepresented peoples. He tweets @BasharatIssa (twitter.com/BasharatIssa).