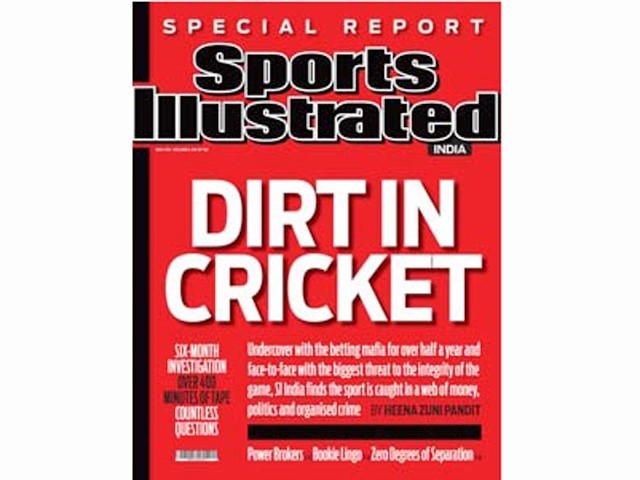 The Sports Illustrated India issue on match-fixing which hits the stands on May 7.

Modern cricket has been tainted with controversy of match/spot fixing and corruption scandals. But despite the drama, the sheer volume of viewers tuning in and fan interest has only increased.

When this month’s issue of Sports Illustrated (SI) India hits stands, it will trigger much debate, deliberation and a wave of “I told you so” comments among followers of cricket all over the world. The cover story “Dirt in Cricket” deciphers 400 minutes of conversations between SI journalists, bookies and politicians in India.

The story was shared with Yahoo Sports, a few days before it is to appear in SI, and promises to carry fascinating revelations and startling claims. However SI, for legal purposes, has not revealed any names of the players or officials involved. Nonetheless, the considerable amount of evidence and investigative journalism that connects the dots is hard to dismiss without raising an eye brow or two.

Sceptics still cast doubts over the semi-final clash that took place in Mohali. A conversation in SI’s possession reveals that Shahid Afridi, much to our delight, refuses to cooperate with bookies. Unfortunately, it also claims that four Pakistani players were paid to underperform in the Mohali clash. Another conversation between an Indian politician from Delhi and an SI journalist reveals the startling amount of cash that exchanged hands during the World Cup 2011. While betting on cricket matches is illegal in India, the politicians over there seem exempt.

Here is an excerpt of one conversation:

I had to re-read the part where he says “Rs200 crore.” Is it any surprise then, that the top brass of Pakistan’s ruling party booked tickets to India well in time for the big clash? The match achieved little in terms of diplomacy, but those who have plundered mercilessly were all there sitting alongside their Indian counter parts. What they were really up to is open to interpretations.

In another conversation, a bookie explains an incident involving two players from the Indian team. The bookie alleges that a player from the Indian squad returned cash because a BCCI official found out about the shady deal. The official, allegedly, stepped into the dressing room and told the players not to do anything suspicious and so the players returned the cash given to them by the bookies.  In an attempt to further substantiate the claim, SI state that another BCCI official revealed that one of the two involved players was warned privately and told that he is being “watched carefully” during IPL 2 in South Africa.

An incident from the World Cup that comes to my mind was observed during India vs Netherland group match in Delhi. A renowned bookie, Pradeep Agarwal, is seen hanging out in the Indian team dressing room and chatting away with players. The same Agarwal was fired in 2008 by IPL for his involvement in match fixing. IPL itself may just be one of the largest markets for gambling. SI goes into the abode of IPL and the mishandling of different issues related to corruption.

In another scenario, there were journalists and media folks still eating their fruit loops for breakfast when the bookies delivered the news that Chris Gayle would not be playing the India vs West Indies match. The news was confirmed many hours later – a discomforting testament that bookies have access to places where even the most enthusiastic followers of the great game can’t go.  It will be a sad day when we have to receive inside scoops from bookies rather than sports journalists. Recently, ex-Sri Lankan cricketer Hashan Tillakaratne came forward alleging that match fixing has “spread like cancer” and he is ready to share information regarding involved players and fixed matches with the ICC.

In the past, highly respected players from Australia and South Africa have also been accused and charged with corruption. It appears no one is innocent. Somewhere, an 18-year-old Mohammed Amir must be lamenting why the only part of the cancer that was removed was his brief but exciting career.

As a diehard fan of cricket, this is a disappointing day for me. Sports Illustrated is not a micky-mouse tabloid magazine; their work is credited as top drawer and their journalists are highly respected. SI is ready to share all its findings with the ICC. So the big question now is, will ICC do something about this, or will it try to sweep it under the rug?