Lesson from the past: Why learning Mandarin is the precautionary measure that Pakistan needs to enforce right now 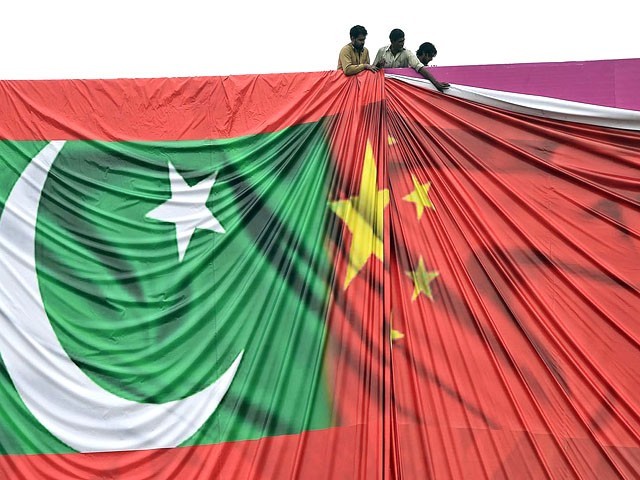 Workers set up a billboard welcoming President Xi Jinping to Pakistan ahead of his visit in 2015. PHOTO: AFP

The China-Pakistan Economic Corridor (CPEC), which was originally valued at $46 billion and is expected to be a game changer for Pakistan’s economy, has been viewed with much scepticism since the day it was green lit.

Some Pakistanis believe CPEC to be the equivalent of the Marshall Plan, an American initiative to aid Europe economically post World War II. Others believe that it is simply another East India Company (EIC) in the making, equivalent to calling CPEC a vehicle for colonialism.

If you think about it, the idea that the Chinese could become the new British for us is not at all far-fetched. While the British innocently entered India through the EIC, the Chinese have chosen to enter Pakistan through CPEC. Also, the lucrative potential for trade and business was the motivation for the British, and the very same potential has brought the Chinese to Pakistan. The similarities here are thus uncanny.

Is CPEC a cloaked attempt by the Chinese to recolonise Pakistan?

No one can say for sure, but by the time this picture gets clear enough to tell, it will already be too late. We cannot effectively decide whether CPEC is a blessing or a colonial nightmare waiting to happen, but what we can do is not repeat the mistakes of our ancestors who were unable to break free of their shackles until Muhammad Ali Jinnah came to their rescue.

Hence the question arises – are we taking the precautionary measures required to ensure that the Chinese do not become for us what the British used to be?

Arguably, the biggest difference between the British and the Muslims of India was a communication gap that resulted from the language barrier between the two. The same is the case with CPEC, which is largely under Chinese management and thus Chinese workers are hired over Pakistani workers due to the language barrier. Learning Mandarin, therefore, is the precautionary measure Pakistan needs to enforce.

In February 2017, a Chinese delegation expressed that Chinese investors were keen on investing in bio-technology, textile, agriculture and renewable energy sectors of Pakistan. Additionally, the delegation also expressed interest in investing in other sectors such as mechanical and electrical trade, construction and real estate development and the automobile sector.

Earlier this year, the first Pakistan-assembled Chinese car went up for sale. Clearly, this highlights the level of investment the Chinese will be making in Pakistan, and as the delegation pointed out, creating 30,000 new jobs in the process.

It is safe to say that in the aftermath of CPEC, the demographics of Pakistan will witness a vast change.  A report by the Federation of Pakistan Chambers of Commerce and Industry in 2016 pointed out that at the then rate of influx of Chinese nationals into Balochistan, the locals will be outnumbered in the province by 2048. This will not only have an impact on our economy, but on our way of life as well. This year, we have already witnessed the launch of Huashang, the first ever Chinese weekly newspaper to be launched in Pakistan, which indicates that the Chinese population is already on a rise here.

It is important to understand that the rapid influx of Chinese nationals in Pakistan won’t just result in new job opportunities, but will also attract Chinese citizens who, given China’s population, will consider relocating to Pakistan in search of employment opportunities. The Chinese companies which are currently working on the development of CPEC projects will obviously prefer hiring workers who they can communicate with instead of Pakistani workers who lack the language skill.

It is a fact that the Chinese civilisation prospered because of the Silk Road, an ancient network of trade routes that connected Asia and Europe. Presently, China’s One Belt One Road initiative (OBOR) will play a similar role and not only lift China in the global economic ranks but also result in a rapid spread of the Chinese population throughout the world. This also means that more and more people will learn and speak Mandarin, in addition to over one billion people who already speak it, to further their businesses. This is enough evidence to conclude that learning Mandarin should be encouraged and facilitated in Pakistan.

In today’s multilingual and global society, being fluent in English is not enough. Education systems in the US and Europe have already introduced various language immersion programs in their education systems which help open new doors for young students.

While numerous countries in the world understand that in the global world we now live in, it is a necessity to introduce prominent languages from all over the world; Pakistan unfortunately did not get the memo. Given the fanfare and celebrations surrounding CPEC, one could hope that the government would prepare to at least incorporate Mandarin into the curriculum or promote centres willing to teach the language. Unlike Sir Syed Ahmed Khan – who encouraged the Muslims of subcontinent to adopt western education during the British Raj – our policy makers have done nothing to ensure that Pakistan will be able to keep up with the influx of China.

Learning Mandarin will not only help Pakistani workers gain jobs in CPEC projects, but will also help them keep up with China’s growing investment in other sectors of Pakistan. In addition to career opportunities, learning Mandarin will also be a gateway for Pakistanis into a new culture of over a billion people, and will surely allow for a better understanding of the Chinese people and their customs. This will ultimately result in more prosperous relations with our neighbours.

The ball is in our court now. We can either allow China’s rapid growth to be the end of Pakistan as we know it or we can let it be a thriving new chapter for us.