Three reasons why Pakistan crumbled at the hands of Sri Lanka 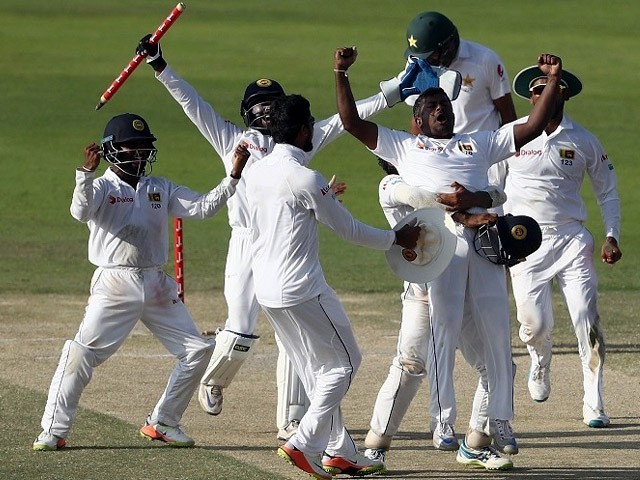 Recently, the Sheikh Zayed stadium in Abu Dhabi hosted two teams, Pakistan and Sri Lanka, who are currently in transition. There were only a handful of spectators, which was hardly a surprise, and although there was a lack of support for their team, the islanders edged ahead.

For the first three days, the game was moving at a snail’s pace. However, during the final days, the game swiftly changed its gears. It seemed as though the match was heading towards a draw, but on the fourth day, Pakistan began to ascend. Although many believed that Pakistan had a good chance of winning the Test match, to the disappointment of many fans, Sri Lanka had the last laugh.

Pakistan’s bowling attack in the UAE revolved around spinners. Conversely, captain Sarfraz Ahmed opted for three paces instead of an additional player in the first Test.

On the morning of the first Test match, the pitch had a tinge of green but due to lack of moisture and the sun baking it down, the wickets became dry as the match progressed and thus, the pitch became more conducive for the spinners.

Perhaps Ahmed was carried away with the grass on the pitch and decided against a bowling attack of two pacers and spinners. Sri Lanka, on the other hand, opted for three spinners, which turned out to be the correct ploy.

On day five, Rangana Herath and Dilruwan Perera piled on the pressure from both ends, taking full advantage of the deteriorating pitch. The spinners hardly missed a beat, thus marking the first Test match Pakistan has lost in Abu Dhabi.

Out of the 40 wickets that fell during the match, the spinners took 26 of them. This indicated that Pakistan missed the trick by fielding a solitary spinner. Breaking down those statistics further shows that 14/20 top five batsmen wickets during the match went to the spinners. This proves the level of impact they had over the match.

A prominent feature throughout the careers of successful batsmen is that they have a very good conversion rate. The better batsmen always tend to build on good starts and convert 50s into 100s rather than throwing away their wicket.

Both Pakistan and Sri Lanka have plenty of new faces in their batting line-ups. These new faces are looking to cement their place in the side but unfortunately, many of them did not make their innings count.

Over the course of the Test match, six batsmen went past the 50-run mark but failed to convert that into a 100 or even more. Dinesh Chandimal was the only batsman who scored a 100 after notching up a 50.

This Test match must be a learning curve for batsmen who are trying to make their mark. However, to get recognition, these players have to avail every opportunity they get.

Batting partnerships are one of the key aspects in any format of the game and especially in Test cricket. One solid batting partnership can put the opponents on the back foot and let the batting side take command of the innings and hence, the match.

Sri Lanka was in a precarious position after having lost three quick top order wickets but they recovered quickly. The reason for this was due to three important partnerships which helped them gain a substantial total in the first innings.

The low second innings totals by both sides had one thing in common, that is, the fact that there was not even a single 50-run partnership.

Although Pakistan had some solid partnerships during the first innings, their inability to form one on the final day of the match contributed to their downfall. Pakistan could have easily gunned down the target had they strung together one sizeable partnership.

Since their downfall at Abu Dhabi, Pakistan has a lot to work on if they want to avoid a series defeat.

It is unfair to criticise Ahmed for his captaincy after just one Test match. We need to be patient and allow ourselves to form a clear picture of his leadership credentials in the game’s purest format.

This might not be a smooth start to his tenure as Test captain but Pakistan should still be confident about levelling the series at Dubai’s day-night Test. However, the skipper and team management need to tweak the side to get the desired results. Here’s hoping Pakistan brings their A-game for the next Test.