Can the Kurdish referendum potentially destabilise the Middle East? 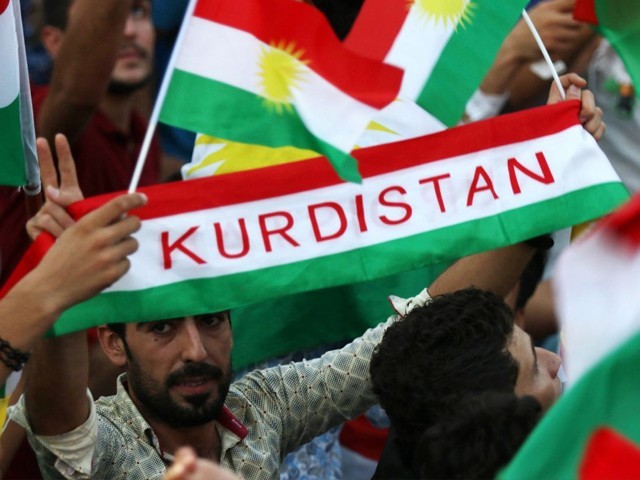 Iraqi Kurds fly their national flag prior to the upcoming independence referendum in Irbil, capital of the autonomous Kurdish region of northern Iraq, on Sept. 16, 2017. PHOTO: AFP

Over the last few weeks, political conversations in Iraq have mostly revolved around the historic Kurdish referendum. This referendum allowed the Kurds to declare independence from the Iraqi central government in Baghdad.

The Kurds are a stateless ethnic group of people who inhabit spaces in modern-day Turkey, Iraq, Syria, Iran and Armenia. They’ve been one of the most persecuted groups in history and it was only recently, in 2005, that they gained constitutional recognition in Iraq.

A few days before the referendum, I asked an Iraqi friend about what the referendum entails and if it would prove to be successful. He smiled and informed me that Baghdad had been resisting this referendum ever since the Americans left Iraq and that the result would definitely favour a separate Kurdish state.

But he was more worried about a larger problem – the control of the oil rich city of Kirkuk. Why? Because it may trigger a war between the Kurdish militias and the Iraqi army.

Looking extremely concerned and worried, he said he didn’t want another conflict in the country after so many years of wars and uncertainty. They have already witnessed enough losses.

But for the Kurds, this referendum is a means of achieving social freedom from a politically unpredictable centre in Baghdad. Another Iraqi friend, a renowned photographer with a strong appetite for Iraqi history, explained,

“The Iraqi Kurds have suffered a lot of oppression since the 1930s at the hands of the central government in Baghdad.”

This is an undeniable fact. The use of chemical weapons in Halabja in 1988 by the Saddam Hussein regime and then the recent insurgence of the Islamic State (IS) further reinforced their need for outright independence from the centre.

However, he went on to say that,

“Baghdad had taken many political initiatives since 2003 to integrate Kurds into the social fabric of the society, since the president of Iraq was a Kurd also. A number of important ministries and the vice presidential position was also occupied by them.”

Since 2003, on the economic front, Baghdad had placed a few state controls on Erbil, which operates more or less as an autonomous region with its own economic policies and trade agreements. This further pushed the Kurds towards demanding an independent state.

Though the important question that comes to mind is how an independent Kurdistan, with its capital in Erbil, would be better off than an autonomous Kurdistan with a centre in Baghdad in the long run?

Iraqi Kurdistan is a landlocked region surrounded by Iraq on the south and neighbours such as Syria, Turkey and Iran, all of which have Kurd populations of their own. This Kurdish population has aspirations of independence and a wider goal of integrating as one independent Kurdish state.

If the Iraqi referendum proves to be successful, Syria may be next in line, where the Syrian Kurds are already enjoying similar autonomy since the 2012 protests. It is for this reason that all three countries maintained cordial ties with Erbil before the referendum. But if the remaining Kurdish population follows suit, it could prove to be troublesome for Turkey and Iran. Turkey already warned the Kurdistan Regional Government (KRG) head that there would be serious implications if they went ahead with the referendum.

But why exactly is Turkey so worried?

A vote in favour of a separate state could fuel separatism in southeast Turkey, where Kurdish militants have waged an insurgency.

The referendum in Erbil has now changed the political and economic realities on ground. The recent military drills by Turkey and Iran were a direct message to Erbil and sanctions soon followed the referendum. The Iranian airspace is now unavailable for Kurdish civilian planes and with the US Secretary of State Rex Tillerson deeming the vote “illegitimate”, the translation of this 93% mandate for independence into anything politically and economically objective seems implausible.

This referendum could merely be a political manoeuvre by the Kurds or an international ploy for some future regional objectives. It could even be a potential step towards integrating into a larger Kurdish state emerging out of Iraq and crawling into other neighbouring states.

However, the fact remains that the Kurds exist in a Middle East which has been unstable for decades now, thus even the smallest of political manoeuvring has the potential to destabilise the entire region.  The best way forward for all parties included would be a constructive engagement, especially for Iraqis, for whom this referendum has brought on anxiety of yet another conflict in its war-ridden history.

An MBA from IBA who passionately follows politics in the Middle East. He has over eight years of experience in policy, management and strategy. He currently works and lives in Iraq.

I live in Iraq and I am not afraid