Pakistan does not need more thieves, harassers or mobs – its police officers are doing the job for them 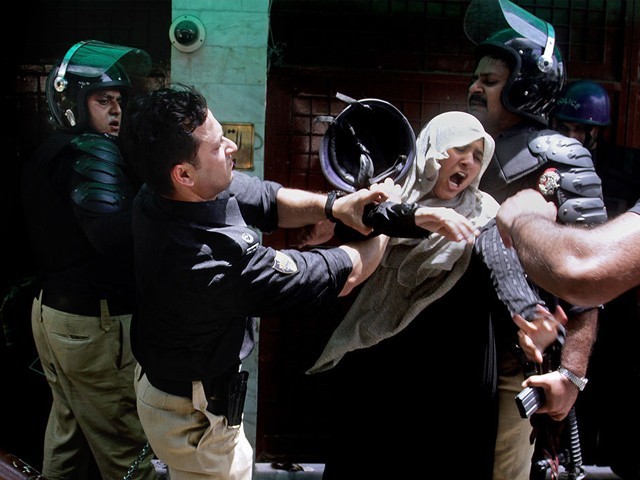 A police officer scuffles with a female protester during clashes in Lahore, Tuesday, June 17, 2014. PHOTO: AP

Recently, I came across a news article about senior police officers breaking down the door of a house in Rawalpindi to arrest a murder suspect.

The house they raided belonged to the cousin of the man suspected of having committed said murder. In addition, when these upright gentlemen did not find the man they were looking for, they decided to take with them cash and jewellery, worth at least a million rupees, which belonged to the owner of the house.

Naturally, the poor victim immediately went to the nearest police station to file an FIR (without which the police cannot investigate a crime) against these officers. However, as usual, the police refused to register his case against their own, and the man went from pillar to post for two months before they finally agreed to file an FIR.

Now let us take a closer look at what exactly happened. The robbery mentioned above took place in Rawalpindi, which is in Punjab. What is ironic is that the Punjab chief minister has reportedly transformed the Punjab police force into a highly professional organisation. Therefore, it is even more surprising that police officers within the ranks of Deputy Superintendent of Police (DSP) and Station House Officer (SHO) calmly looted the house, as if they knew they would not be caught or held accountable.

Of course, it is rare for police officers to be punished or penalised for their misdeeds. Even when they beat up women, their superiors do not take any action against them. Recently, I came across another video entailing a woman being beaten up by male police officers in Gujranwala.

Apparently, the cops believed no eyebrows would be raised and they would not be punished for manhandling a woman like that. In fact, they behaved in a manner that the police would normally behave in, as if they were above the law. However, the sad part is that they are not wrong – they are above the law and we see that every day.

If they were held accountable, senior police officers would have taken them to task, but no, why would they? They depend upon the lowly constables to do their dirty work and share their illegally earned loot.

I remember a time when police officers were honest and efficient in doing their jobs. Even the low-ranked constables and havaldars (sergeants) were highly respected and many young boys dreamed of becoming police officers after graduation. In fact, I knew a civil engineer who resigned from his job, joined the police, and retired as an Inspector General (IG). Apparently, he gave up on a highly lucrative job in the private sector, just to enjoy the perks and privileges available to police officers.

Gradually with time, the police have become very corrupt. In Karachi, most police officers are appointed not because they are qualified for the jobs, but because they have either paid a lot of money to get employed, or they happen to be relatives of influential feudal lords or people higher up.

Numerous police officers are also activists of the ruling political party and use their resources and power to gather support.

After getting a job, they resort to bribery since they cannot maintain their lavish lifestyles with the salaries that they get. They also have to keep paying the right people to remain posted in Karachi otherwise, they are sent to other smaller districts. In a few years, they get so rich that they are able to buy plots and bungalows in posh housing societies, like the Defence Housing Authority (DHA) in Karachi. And because they have the right people on their side, they know that they cannot be sacked and so they continue their nefarious activities until they retire.

There was once an SHO in Karachi who owned a car show room on the ground floor of a residential building. One day, there was a dispute between his clerk and a couple of residents on the upper floors of the same building. The clerk was injured in a fistfight, and the incensed police officer immediately got cases registered against seven residents of that building. Mentioning the names of the seven people accused in the FIR was to ensure that there would be no bail for them, as the charge against them was ‘rioting and hooliganism’. It took them a week to placate the powerful SHO. Furthermore, the SHO got his clerk to state in court that there had been six people who had attacked him, instead of the previous seven. Such are the powers of an ordinary SHO in Karachi (who had probably paid a fortune to get posted to the metropolitan city).

If you are a resident of Karachi, you know that whenever someone is robbed in the city (even if the amount is in millions), they will never go to the police. A few years ago, dacoits barged into a relative’s bungalow, stayed in the house for two hours (having tea and biscuits and joking) and finally took off with about Rs15 million in cash, prize bonds and jewellery. Judging by their confidence and attitude, my relative was sure that the robbers were either serving or were former police officers. Even though I tried hard to persuade him to report the matter to the police, he refused.

“Going to the cops will only mean more harassment for me and my children,” he said.

I knew a factory owner who was recently kidnapped. The kidnappers relieved him of whatever cash he had on him, and then he managed to escape after a few hours. He reported the matter to the police and it only added to his troubles. For the next few days, the cops would call him at odd hours, mostly after midnight, to ask him questions about his ordeal. Finally, he managed to find someone who knew a very senior police officer and he ordered the SHO to end the harassment.

That is the reason why ordinary and decent folks are scared to call the cops whenever a crime takes place. Twenty-five years ago, I was the Chief Executive Officer (CEO) of a salt manufacturing company on the coast of Karachi. Heroin addicts would routinely steal wires and cables from there, which would end up in factories that made electrical items.

My fellow directors and I never reported these thefts to the cops because we knew that they would never be able to catch the thieves in the dead of night. Furthermore, the place was mostly deserted at night and the locals were even convinced that it was haunted by evil spirits. However, one day, the heroin addicts went too far. They broke open the door of the electric meter room of our company and took away electric meters, transformers and equipment worth around half a million rupees (in today’s money). K-Electric (KE), formerly known as Karachi Electric Supply Company (KESC), said we had to get a case registered with the police or we would be charged with theft.

My fellow directors begged me not to go to the cops, saying,

“The cops will torture and even kill you if you go to them!”

Nevertheless, since I had no choice, I did go into the police station and ‘persuaded’ the officer to register the complaint. When I came out of the station and returned to the salt works, my business partners were astounded to see that I was safe and sound. And mind you, they were not your common Pakistanis, they were millionaires back in the day (when a litre of petrol cost less than a rupee). Therefore, if such people were so scared of the cops, you can well imagine how a poor labourer or peasant would feel at the mere sight of a police constable.

So, will we ever have honest police officers in Pakistan? Swift justice is the answer. Until and unless justice is done and seen to be done, we shall always have corrupt police officers. Those who committed the recent robbery in Rawalpindi, for instance, should have been terminated and given lashes in public as the police even had proof in the form of CCTV footage.

This kind of punishment will ensure that all police officers turn into law-abiding citizens themselves. But I doubt that the government will have enough courage to even try to reform the police departments in the country. This is because they need a corrupt police force to enrich themselves. As long as our politicians continue to use the police for their own nefarious deeds, it will be a long time before all our cops turn into law-abiding and god-fearing citizens of the country.