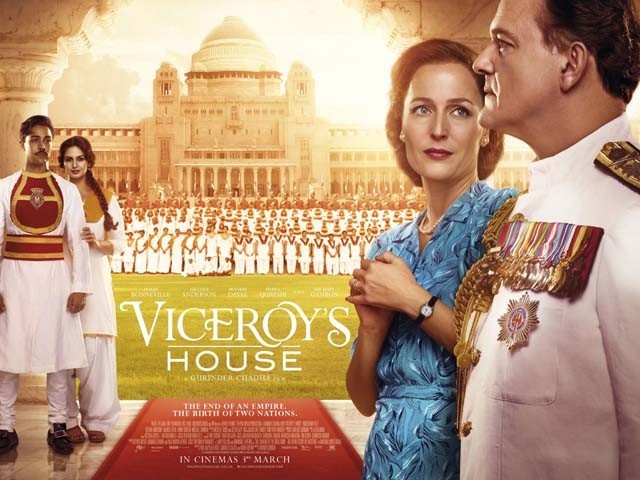 We have seen Gandhi and we have seen Jinnah. Now, here comes another contender that demands viewing with the same veneration, if not more. But the problem is, I was less than thrilled watching the Viceroy’s House, not wanting to keep this adaptation of the 1947 Partition beside the previous two classics directed by Richard Attenborough and Jamil Dehlavi respectively.

In her latest flick, the Bend It Like Beckham director, Gurinder Chadha bends the truth just enough to prove Lord Louis Mountbatten (Hugh Bonneville) an angel, and Muhammad Ali Jinnah (Denzil Smith), an egotistical villain. She portrays Jinnah as if he were single-handedly responsible for the carnage and bloodshed of the one million migrants.

As a result, the film does not rise above the British propaganda, which aims to create a soft image of the last Viceroy of India tasked with “handing over” power to the Hindu and Muslim leaders of the Indian subcontinent.

Viceroy’s House was initially screened at the Berlin International Film Festival in February. However, it was tactfully released in India on August 18th, three days after the 70th Independence Anniversary of India and four days after Independence Day in Pakistan.

Part fiction, part non-fiction, a fraction colour, a fraction black and white – the film seems to lack dramatic unity and the director’s imagination.

Take the casting for example, Hugh Bonneville as the Viceroy is perhaps little more than an alter ego of the Earl of Grantham that the actor played in the famed television series, Downton Abbey.

Smith, who plays Jinnah, has ironically portrayed Pandit Jawaharlal Nehru in Shobhayatra (2004). In the future, who knows, Smith might play Mohandas Gandhi as well, and set a world record for irony.

To make matters worse, Chadha even imports into the script an external love story to the likes of Titanic, but the pathos loses its potency thanks to an anti-climactic and Bollywood-styled surprise reunion of the lovers. Deus ex machina, at its best.

“History is written by the victors,” quotes the opening title of Viceroy’s House.

But going by the number of historically incorrect biopics recently churned out by British directors, one might as well say that ‘history is re-imagined by the losers’.

For instance, one cannot help but feel appalled by the apparent bias for the haves and the have nots – the upstairs and the downstairs. Chadha reserves the milk of human kindness for the kings and queens, and portrays the common people as hard and selfish. Eventually, she ends up being the stepmother to her own cast and characters.

In one of the climactic scenes showing a celebration on  August 15th, Smith’s Jinnah whispers smugly into Viceroy’s ears,

“… But the truth is, we’ve both been used,” to which the Viceroy painfully replies,

“But you got what you wanted.”

“I got only half the country I wanted,” replies Smith’s Jinnah with a sly grin and dark circles around his eyes. 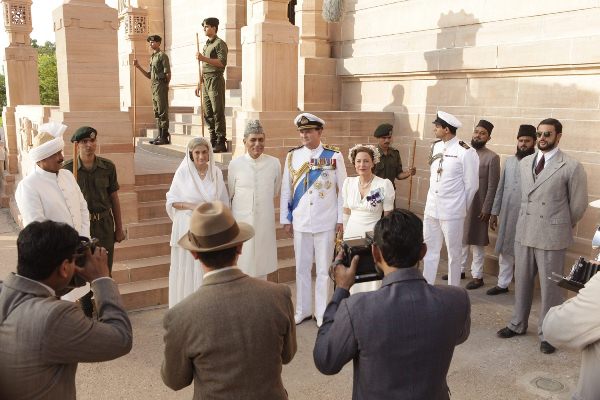 In a similar vein, Chadha crudely caricatures Gandhi (Neeraj Kabi) who, on his very first visit to the new Viceroy’s House, offers the king’s cousin some home-grown goat’s curd. Seemingly not fit for the fine gentlemen’s eating, before trying it he openly confesses,

Chadha cleverly avoids the Nehru-Lady Mountbatten scandal, but she does take a dig at Tanveer Ghani’s character portrayal of Nehru by having one of the Sikh servants randomly slap the first prime minister (PM) of India in public and in front of the Mountbattens. I am not sure whether such an embarrassing incident actually happened in Nehru’s political career or was this made up. Even if it did, it is not befitting for a filmmaker to ‘damage’ a real-life person’s character on screen.

In line, Britain released another biopic, Churchill that is equally erroneous and propagandist by design.

“Churchill is a pantomime PM in Jonathan Teplitzky’s ponderous film that strives too hard to excuse Churchill’s flaws,” writes Simran Hans of The Guardian.

Then there is one from our all-time favourite British director Christopher Nolan – Dunkirk. It forces the viewers to unlearn all of the rules of storytelling that the director taught us with his earlier enchantments. Why did Nolan choose to make Dunkirk is anybody’s guess, but to me, it is not a movie, it is a montage.

The question remains, why is Britain bankrolling period films about its political leaders and military commanders now?

“This eruption of Anglophilia might be the result of a counter-reaction to the United Kingdom’s vote to break from the European Union.”

This actually makes much sense since a vast majority of mainstream artists wanted to remain in the EU as leaving would affect artists, arts funding and cultural diversity, as tweeted by UK’s Frieze magazine in June last year.

We are saddened to hear the UK has voted to leave the EU. This will affect artists, arts funding & cultural diversity generally.

With Brexit, the United Kingdom perhaps becomes a divided nation and continent. But resorting to jingoism through movies that misrepresent history and mislead the audience is only going to tarnish Britain’s image.

Given the misrepresentation and the melodrama, Viceroy’s House will be remembered as a fanciful tree house, far removed from reality.