My days as a manual labourer 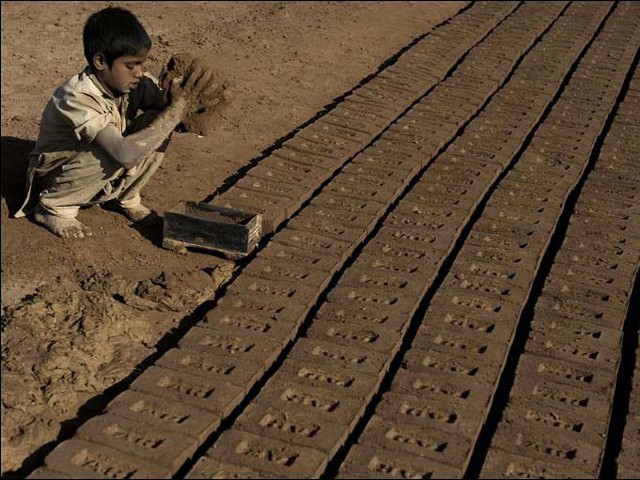 Although bonded labour is a grave crime according to the constitution of Pakistan, but no one cares about implement laws that protect workers.

Many of my friends don’t know this but I worked as a manual labourer in my early teenage years. I used to work several hours a day for just Rs20.  There weren’t any weekly off days nor were there any extra benefits.

If you got sick or were unable to come to work for some reason you couldn’t imagine getting paid those days. In fact, you would end up spending money on a visit to the doctor just so you could get back to your life of servitude. I can only describe those working hours as restless, endless stress.

Sometimes, it would be so hard that I was forced to compare myself to an animal and struggle to find a single difference.

This is not a story from the pre-partition days. Rather, it is an account of my life from just a few years ago.

That time of my life has passed now, but for many, not as fortunate, the picture is the same, on the streets, in the marketplaces, and in the fields of this country.

My life may have changed, but what hasn’t is our so called ‘system’.

It does its best to crush poor labourers.

In Pakistan, millions of people, including women and children, have been expoited by a few dominant hands for their daily bread for decades.

A vast majority of labourers remain outside the ambit of labour laws, which means that workers have no paid holidays, no job security, no medical coverage, no pension or provident fund, no limit on the work hours and are paid no overtime. You might as well just refer to them as bonded labour.

Bonded labour is a grave crime according to the constitution of Pakistan, but no one cares about implementing laws that could protect workers.

Every year on May 1, people around the world, including Pakistan celebrate Labour Day as a public holiday. Some arrange get-togethers to enjoy the much needed holiday while others spend it either watching TV or sleeping in their beds all day. The idea is to avail as much from this day as one can – for oneself. But, what no one does is think about what this day truly stands for.

I ask now: have any of us done anything to understand the problems of labourers on Labour Day?

No gay girl in Syria: Lessons for the social media community

Pakistan would have saved the IMF chief

Baisakhi fair: Thanking one God for His bounty