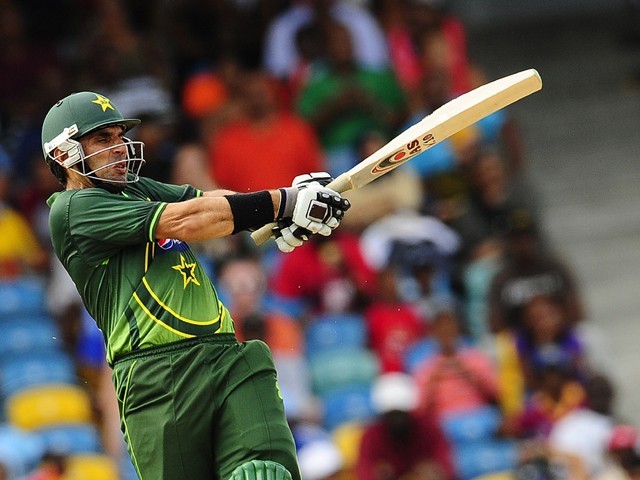 Misbah-ul-Haq plays a shot during the third ODI between West Indies and Pakistan at the Kensington Oval in Bridgetown, Barbados, April 28, 2011. PHOTO: AFP

On a pitch that offered pace and bounce, especially if the bowler was willing to bend his back, Ravi Rampaul did well in reducing Pakistan to 12 for 3 as the top batting order of the greens disintegrated.

Although they were not defending a big target, it looked as if West Indies could make a match of it at that point. But this was a short-lived dream, as Misbahul Haq’s calm presence at the crease not only assured Pakistan victory in the match but also an unassailable lead of 3-0 in the five match series.

Recently, Misbah has faced heavy criticism for his innings against India in the World Cup semi-final that some believe lost the match for Pakistan. Many have even called for his head for his performance in what was the most anticipated clash ever. But, the selectors did well to give him a place in the squad for this series, as currently he is the lone experienced member of the batting line-up with an average of over 40 runs in One Day Internationals (ODIs).

The target was small and so it allowed Misbah to play his natural game, which is to play risk free cricket. At first, he was accompanied by the aggressive Umar Akmal on the other end, who made quick runs as Misbah settled in his groove.

The importance of Misbah’s innings was the role of the sheet anchor that he played. As wickets fell around him, Misbah continued to ground out runs and did not panic, making sure he was there till the end, as it was evident at the moment that if Pakistan batted out the full quota of 45 overs, they would surely win the game.

Umar Akmal and Hammad Azam hit a brace of 30s to give Misbah good company.

Azam, who was playing his first ODI innings, showed good technique and seemed like a good prospect for the future, as a genuine all-rounder for the team. He needs to be given more opportunities and should be asked to bat higher up in the order in the remaining two matches to see how he handles the situation and pressure of chasing a bigger target or setting one.

We have already seen Azam’s potential at the Under-19 level. He also displayed good sportsmanship on the field when he left immediately after being given LBW when he had actually edged the ball. He is certainly a keeper.

After Azam’s dismissal, a mini panic set in the batting ranks as Shahiid Afridi and Muhammad Salman both were dismissed quickly, but this was followed by some big hitting by Wahab Riaz which removed all doubts about the outcome of the match.

Earlier, Pakistan bowled well to dismiss West Indies for under 200, though they were assisted by some inept batting from the opposition.

Simmons continued his rich vein of form and received support from Darren Bravo but once these two departed, the rest of Windies batting told a familiar tale of ineptitude as it folded rather easily.

The Pakistani bowlers, for their part, did well to limit the extras to 11 after having given over 20 extra runs in the last two matches.

There are still two matches to be played and hopefully a 5-0 whitewash is on the cards. That should provide a good launching pad for Pakistan in the upcoming Test matches where we seek to win our first ever series in the Caribbean.