Silence of the lambs: Pakistan is doing its fair share for the Rohingya refugees, but what about India and Bangladesh? 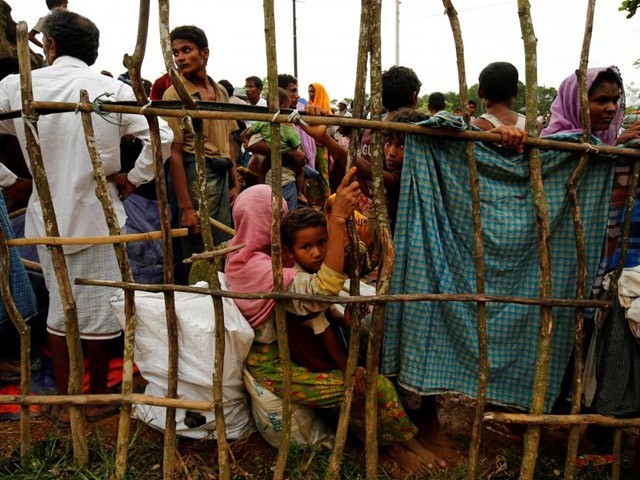 One wonders what is more appalling – Myanmar’s systematic genocide of its Muslim minority, or the inexplicable manner in which the world stayed numb while a small country, wielding hardly any politico-economic clout in international affairs, went about openly violating all norms of international law.

Let us forget about the world for a second, what exactly has the “Muslim Ummah” done to stop the killings of our Rohingya brethren? It is because of the inaction of Muslim governments in times like these that the Organisation of Islamic Countries (OIC) is often referred to as “Oh, I see”. If Muslim countries had taken a unified stance against the Myanmar government, by putting sanctions or halting all trade and oil to that nation, the sheer economic impact would have forced the Burmese to end all brutalities in an instant.

Fifty-seven member states, some of which are oil-rich nations and represent a billion people, and yet we are still dismally voiceless. It has taken over four years of death, rape and plunder for us to finally speak out against the atrocities by the Burmese. In the last three days alone, about 270,000 Rohingya Muslims have fled Myanmar into neighbouring Bangladesh.

Two factors make the situation in Myanmar particularly sickening. First is the role, or lack thereof, that the pseudo champion of human rights in Myanmar, Aung San Suu Kyi, has played. In an interview with BBC’s Mishal Husain, Suu Kyi’s prejudice against the Rohingya became quite clear when she claimed oblivion to any massacre of Muslims and instead blamed both sides. People in Myanmar regard Suu Kyi as their hero, and had she vehemently opposed the injustice meted towards the Rohingya, her support would have surely alleviated the plight of her countrymen. Through her covert reticence, she has divided a nation on ethnic and religious grounds, which has caused a massive refugee crisis in the region.

Secondly, it is the identity of those guilty of these crimes that makes this quagmire shocking. Buddhist monks, followers of a faith that is cantered wholly on peaceful meditation, are the ones carrying out the ethnic cleansing of the Rohingya people. And rather than calling this out for what it truly is – state-sponsored terrorism – media channels display their selective biased agendas. Imagine for a second, if the roles were reversed and extremists were running about in Myanmar slaughtering thousands of innocents on the basis of their beliefs, what exactly do you think the whole world would call them? The answer is clear as daylight.

In the past few months, due to the impact of social media and the efforts of the United Nations (UN), this issue is back on the front pages. A few days ago, Turkey once again extended a helping hand to the Rohingyas by offering to take care of those who had sought refuge in Bangladesh.

But others have not been so supportive. Bangladesh, for example, has been very reluctant to accept the refugees, even though they share a common ethnic bond with the Rohingya people. The same goes for India; for a big country, they are certainly not bighearted. When there was unrest in former East Pakistan, the Indians were the first to intervene sovereign land just to help their neighbours. Now, when their neighbours in Myanmar are suffering, India has turned a blind eye towards them. So much so, that it is even threatening to deport them. In fact, only last month, India claimed that it wanted to deport around 40, 000 Rohingya refugees.

In Pakistan’s case, the situation is slightly different. Though we genuinely care for the Rohingya cause, it is almost impossible for us to take them in. This is because we are already hosting the second largest refugee population in the world, with over a million Afghan refugees. Furthermore, a protest was organised in Karachi where hundreds raised their voices against the brutal genocide of Rohingya Muslims.

The world around us has to shoulder some responsibility as well.

Let us not forget that injustice fosters injustice. When a nation suffers such a travesty of justice, they develop the tendency to take matters into their own hands. Such people become the recruiting groups for extremists, who fan the burning flames of hatred and revenge. There are reports stating that some terrorist elements have sprung up in this Rohingya crisis.

Indifference and hypocrisy are the world’s biggest enemies. Our silence to the Rohingya crisis has already caused too much destruction. We cannot remain silent anymore.