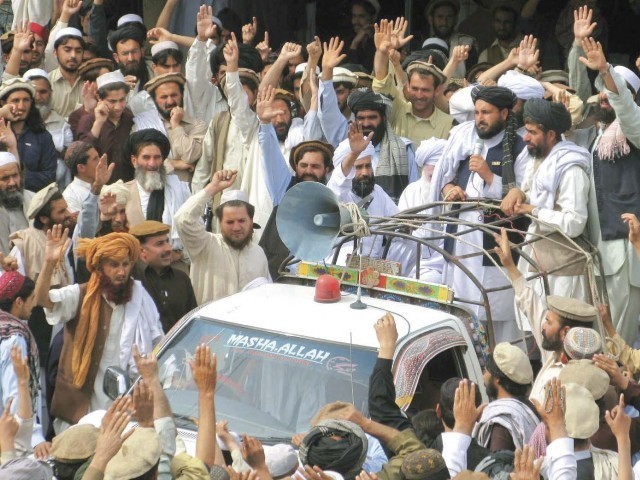 For the good of their youth, their tribes and ultimately Pakistan, the tribal chiefs willingly sacrificed themselves.

To the rest of the world, they were just four names, but Bajaur will pay a heavy price for them. The deaths of the four Maliks and a lashkar chief in the blast that occurred this week in the area was the death of Fata’s voice against terrorists.

One of the men who was killed, Malik Munasib, was a light hearted, jolly fellow, whose company would make anyone come alive. He was brave but it took him a while to realise that his fight in Afghanistan against the Russians was a political game, no better than the one being played today by the Taliban, America and Pakistan.

Beginning with the assassination of Mian Shahjehan, the killing spree of the fanatics took away many of our respected and outspoken leaders – the killings were motivated by either the Taliban’s fear of our elders speaking against them to their followers, or their attempt to subdue locals.

Many of the Maliks I’ve heard speak used to tell me that it had become almost impossible for them to say no to the demands of the Taliban as it seemed they could do nothing to protect the chieftains.

Why I picked up a gun

To counter this, tribal courts were soon formed, followed by training centers. People, driven by the fear of losing their lives, started joining the anti-terrorist efforts.

When Bajaur saw a tribal militia, people were happy but uncertain about the future. They thought of it as their shot at a new life with their own people in the lead.

However, in just a few months it dawned upon them that behind the small group of the local Taliban, were the dark faces of the Arabs, Chechens, Uzbeks and others.

My area of residence, the Salarzai region, came under the control of Naimatullah, a man known for beheading an innocent civilian in a video that became viral throughout the region.

Then one day, despite my educational background, age and abilities, I picked up a gun too.

We were on our own – acknowledgement and support from the army and government came much later.

The courage of a few men resulted in the uprising of the people of Fata against the Taliban who had been mercilessly killing innocent people for years ever since the day the flag of Pakistan was set high on the headquarters of al Qaeda in Damadola.

The uprising eventually forced the miscreants to go into hiding, after which they started targeting our chieftains from caves, bushes and other stealth locations. Tribal chiefs like Malik Fazal Karim and Kamal Khan were killed, but the terrorists and their threat somehow remained under pressure ever since.

The sacrifices of our bravest men

Last week when the Taliban from across the border killed almost 40 security personnel, the army decided to seal the border. Once again, it was these same same men – Malik Munasib, Muhammad Akbar, Mohibullah and Sherzada who volunteered to help the army gain the confidence of the tribes bordering Afghanistan.

However, on the evening of April 23, 2011, while they were returning back home, a suicide bomber collided with the vehicle of the brave men and took them away from us, also injuring an army Colonel in the process.

Men like them are born once in centuries. For the greater good of their youth, their tribes, Bajaur and ultimately Pakistan, they did not hesitate to put their lives at stake. They are missed already and their lives remain for us a source of motivation to walk on the righteous path.

I hope the news of the government stopping their support for the lashkars is false otherwise those walking in the footsteps of these lions might weaken. Of course they will never be weak enough to put the protests of political parties in the capital to shame.

Nobody wants the same situation here as it is in Libya for those fighting in the lashkars are not fighting because they want to but rather because they don’t any other choice.

A post graduate student of Public Policy and Administration at the University of Vienna, free lance writer and photographer, originally from the Bajaur Agency, FATA.

Ready to die for a life of freedom