Ironically, the credit for banning triple talaq in India goes to BJP and Narendra Modi, not Congress 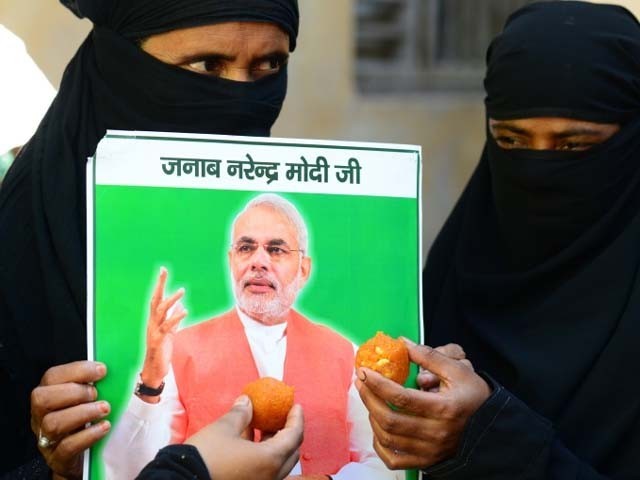 Muslim women in Varanasi after the BJP swept the Lok Sabha elections in 2014. PHOTO: AFP

The recent decision regarding triple talaq by the Supreme Court (SC) of India has elated many liberal intelligentsias. I also believe that it is a step in the right direction and should be applauded by all those who want better treatment for Muslim women in India.

I have written about it earlier as well, that one of the major problems ailing the Muslim societies is the gender imbalance due to the on-going rampant religious orthodoxy.

From a political perspective, what is really interesting is that apparently, the party which has actually championed the issue in recent times is not the left-leaning Indian National Congress but the right-wing Bharatiya Janata Party (BJP). In fact, even before the verdict was announced, BJP had constantly projected this as an important political issue. Prime Minister Narendra Modi himself took a very direct and bold stance on this issue several times.

So why is this the case? Why is a right-wing party supporting something which is evidently liberal and progressive? Why have Congress and other left-leaning political parties, despite their apparent liberal credentials, failed to support the repeal of triple talaq in a clear and unequivocal manner? While it is true that Congress has welcomed the decision of SC, the reality is that throughout the heated debate on this issue, they treaded lightly and tried to avoid taking a clear and candid stance.

In order to comprehend this, we need to understand the political strategy of parties like Congress in the context of Indian secularism. In the West, secularism means separation of state and religion while in the Indian context, secularism means ‘equality’ between all religions. However, in reality, it has evolved as the protection of religious minorities and their respective faiths. In case of Muslims, this has resulted in them being governed by the Muslim Personal Law, in matters pertaining to personal domain.

Over the years, Congress has championed itself as the protector of this kind of secularism and its political strategy has been to court sizeable minority groups, particularly Muslims who often vote as a block. At surface, promoting this brand of secularism looks normatively appealing, while in reality, it has led to several anomalies as at times, Congress has ended up actually supporting reactionary laws despite its claims of being a liberal and progressive party.

One of the most famous incidents was the Shah Bano vs Mohammad Ahmed Khan case (1985), where Shah Bano, a divorcee had appealed to the court for alimony payment from her husband. The case went to SC, where it was decided in her favour.

The verdict angered conservative sections in Muslims and there was a movement against it which threatened to turn violent. At that time, Rajiv Gandhi was losing popularity and he feared that if Muslims did not support him electorally, Congress would be decimated in elections. Hence in order to appease Muslims, Gandhi’s government passed an act in 1986 titled as ‘The Muslim Women (Protection of Rights on Divorce) Act, 1986’ to nullify the judgment of SC.

The passing of this law was a clear case of appeasement and was normatively flawed as instead of protecting the rights of an old divorcee woman, it actually deprived her of monthly sustenance. It was a political move aimed at gaining immediate political advantage, which eventually backfired both in the short run and long run.

This move gave BJP the much needed political space as it was able to portray Congress as a Muslim appeasing party. It was also able to create the perception that secularism espoused by Congress was actually anti-Hindu in nature as it privileged Muslims too much. Since Congress was clearly on a weak moral wicket, BJP was also successful in creating a polarisation which benefited the latter. It was that point onwards that Hindus gradually started to abandon the Congress and other parties with similar outlook.

Before mid-80s, parties like BJP had been in the fringe and seemed destined to remain there. Consider this: BJP contested a total of 229 seats in Lok Sabha and won just two in the 1984 elections. However, things had changed dramatically by 1989 as in these elections, BJP increased its seat tally to 85 and became the most important partner of Janata Dal led coalition. The Shah Bano case along with Ram Mandir issue played a decisive role in BJP’s dramatic rise.

What Congress completely overlooked was the fact that for secularism to have some sort of a political appeal, it should have something attractive for the majority as well. Over-appeasement of minorities, particularly when normative basis is weak, will end up alienating majority, uniting them on communal lines.

This is exactly what has happened in India. To a substantial extent, the rise of communal BJP has been scripted by parties like Congress and their blunders. The problem is that they have not learnt their lessons even now.

As I pointed out earlier that even in the triple talaq case, Congress was not clear in its stance and treaded very carefully. Ironically, it is BJP, a communal party, which has ended up actually supporting the cause of Muslim women.  It has done so in a way that it has managed to further consolidate its Hindu vote while increasing the possibility of gaining some votes from Muslim women in future.

Now that the verdict has been announced, some are predicting that BJP’s stance on triple talaq will reap the reward in the form of rich electoral dividends in future as both its Hindu and Muslim vote banks are likely to increase. Politically, BJP has played a masterstroke and PM Modi deserves credit for that. In fact, he was very vocal immediately after the verdict when he tweeted the following:

Judgment of the Hon'ble SC on Triple Talaq is historic. It grants equality to Muslim women and is a powerful measure for women empowerment.

BJP has ended up taking the credit in this matter and rightly so.