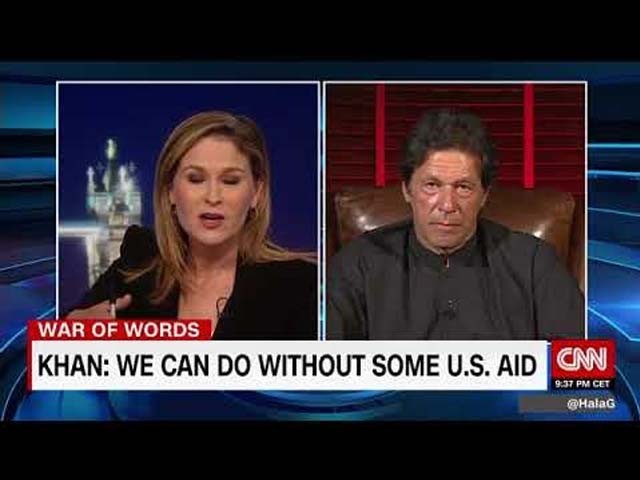 In an era of hyper-nationalism bordering on fascist tendencies, a strongly crafted statement works wonders for your public image.

This is exactly what we witnessed recently. America’s recent tragedy, otherwise also known as President Donald Trump, was found to be ruffling some spiteful feathers yet again. But Trump said what all American leaders have already said about Pakistan (we’ve been compared to cancer and called an international migraine, for starters). He also threatened Pakistan with the stoppage of American aid if we don’t “do more”.

Been there, heard that.

In came Imran Khan to rescue Pakistan from this shared sense of shame. In a CNN interview with Hala Gorani, Imran proved to be the champion of words that he has reduced himself to. Truth be told, Pakistanis would have hailed any leader speaking fluent English, but here, the man was also making sense.

Voila, the retweet button was abused and the interview was shared numerous times on social media platforms.

“He has slapped Trump!”, commented one sentimental fellow furiously.

“America must be scared now”, said another.

But if we scrutinise Imran’s statements, what he said only seems to be hollow bravado, something he’s made a signature style out of for himself.

And once again, Imran proved that he’s the hero we deserve, not necessarily the one we need. If it’s only a populist politician we’re doomed to elect, Imran loses his distinction amongst the myriad of numerous options we currently have.

And since the interview is already making rounds on social media platforms and it’s only a matter of time before it is registered as a national treasure, I thought about writing on it to ask certain questions. In my defence, I am putting forth these questions to seek answers and justifications. Many readers might disagree and claim it’s lifafa (envelope) business, but it is not.

In the beginning of the interview, Imran seemed to be stuck on the “not our war” narrative, but since so much has been written on the fallacy of this view, it’s futile to discuss it again.

Imran’s blatant opposition to Operation Zarb-e-Azb is still fresh in many minds and I think it’s funny when he celebrates the “security” of Khyber Pakhtunkhwa (K-P) on Twitter without any apparent sense of irony. If you are against armed offensive against the terrorists (which Imran is in this interview and otherwise), you lose all moral and political prerogative to celebrate its achievements. He is always congratulating our police forces on this victory (whose efforts and sacrifices have undoubtedly been enormous), yet overlooks the actual war machinery that was used to achieve the current state we find ourselves in.

KP is frontline province in combating terrorism and helping to bolster security of the country. https://t.co/V4DeTmxffQ

Probably because that would weaken his ‘only dialogue’ narrative or probably not. Who are we to judge?

Perhaps more important is the aid issue. When Gorani asked Imran about the discontinuation of financial aid from Trump’s side, he was quick to brush off the topic with a flick of his brow. He termed the aid as very “costly” for Pakistan and suggested we’re better off without it.

Talk the talk, done. Walk the walk? Well… as I write this, there are a number of the USAID projects running in the province under Imran’s K-P government. Refer to the interactive map on the USAID’s website for further details. And here is what bothers me. It is easy to blame the boogeyman, but when will Imran ask these projects to wind up and rid his province from American interference? They might not tell you this, but the USAID is an American federal government agency and it has made its purpose quite clear. Its official website says,

“US foreign assistance has always had the twofold purpose of furthering America’s interests while improving lives in the developing world.”

Moreover, the USAID lists “strengthen democracy and good governance” amongst its primary goals. In 2017 alone, the agency has spent more than $20.49 million on democracy, human rights and governance in Pakistan.

So much for painting the USAID as a benign and non-interfering welfare organisation.

I have already encountered various people on the defensive, suggesting that what Imran said was solely in reference to the military aid. It is important to note here that Gorani specifically inquired Imran about “military and economic aid”, who then went on to bash both forms of aid in the same breath.

Personally, I have nothing against the USAID, but if you’re really against American money, look into your quarters before pointing fingers at others. Moreover, it’s not just an issue about the USAID’s decision making powers and our government’s helplessness. Only last year, the K-P government teamed up with the USAID for the establishment of the IT Skills for Youth Project. Moreover, a burn centre in Peshawar is among one of the projects the two entities have teamed up for.

And then there’s another pressing issue dealing with the topic of terrorism in Pakistan.

When asked about the way forward regarding this matter, Imran was eager to bring up the 20-point based National Action Plan (NAP), which focuses on “disarming” the militants. In fact, the said plan, devised after the brutal Army Public School (APS) incident, focuses on ways to eliminate terrorism in most of its points. What Imran clearly missed here was the fact that the glorification of terrorists will be banned if the plan is to be followed. Thus, things don’t add up if you consider that his party’s nominee for the prime ministerial slot, Sheikh Rasheed, is a man who did not condemn what Mumtaz Qadri (Salman Taseer’s murderer) did.

Now, before this turns into another one of those liberals versus conservatives debate, let me point out that Qadri was held to be a terrorist, convicted and hanged for the very same charge.

And therein lies my problem.

A person of Imran’s calibre should definitely know better than to fall back on the NAP when faced with a tough question and to ridicule the plan otherwise. Or is it the same good terrorist versus bad terrorist sub-speech he is trying to resurrect all the time? He also dismissed Zalmay Khalilzad’s allegations quite conveniently while pointing out Afghanistan’s double games. That is great, but then public enemy number one hiding in your sleepy garrison town is your responsibility more than anyone else’s.

And his lack of responsibility in such capacities is essentially what catapults Imran’s fiery response. Perhaps Imran is only carrying the legacy of trial-approved nationalism in Pakistan. Roaring in the face of the United States is as strong a factor in inciting public sentiments as was using religion or defining ourselves in comparison to India.

However, such gimmicks leave us lurking in the dark and add little to our national identity or goals. The problem with Imran’s interview is the underlying hypocrisy that is almost too palpable to ignore. There may not be any right or wrong decisions in politics, but there are at least transparent ones. It is time for Imran to adopt the latter.

It is better to go down in history as a fallen warrior than a manipulative nothing. Imran says what the people want to hear, apparently without lending much thought to his words. And this certainly is the modus operandi of many Pakistani politicians. Regardless of Imran losing credibility over the years, he still manages to maintain some of it – a perk of lousy competition perhaps.

But if it’s only the twisting of words you’re good at, without having the ability or capacity to add practical connotation to them, you should aim to be an international writer, not a national hero.