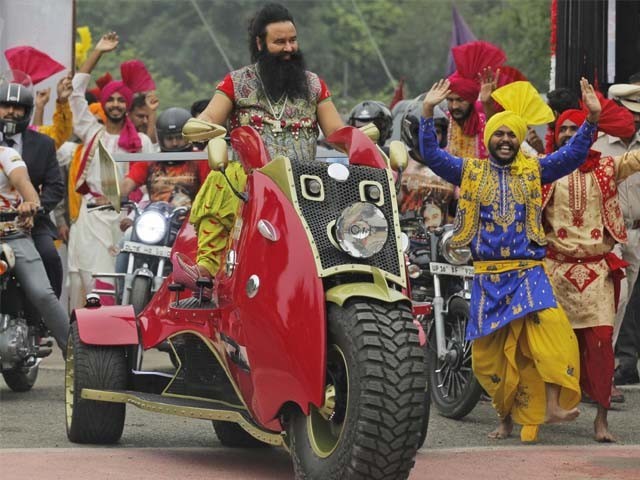 Ram Rahim for instance, is the king of bling and gives some serious competition to Bollywood’s Bappi Lahiri. PHOTO: AP

Across the globe, religion is becoming the fastest growing trade. After all, there is never a dearth of naive masses waiting to fall prey on their fears. This is the reason why so many babas and gurus with the gift of the gab and a penchant for floating uncanny stories are slowly taking control of several lives. They seep into people’s lives by becoming not only their spiritual teacher, counsellor, psychiatrist, personal confidante, but also their family advisor, semen donor and sometimes even money launderer.

These phony babas mine on people’s obliviousness by making them believe that they are the ultimate answer to everything in life. By making the ignorant feel wronged, they slowly start taking control of their lives by becoming their angel. Yes, the living angel that can transform the reality of their life with their invisible magic wand.

Asaram Bapu, Rampal and Gurmeet Ram Rahim Singh (the love charger baba) are nothing but spinoffs of this industry that thrives mainly by fooling, exploiting and hypnotising the ill-informed. Starting from cooking up a fictional past life that has a humble background, to renouncing their family to serve the people, these self-styled godmen fabricate tales that market them as charitable messiahs. With strategic marketing and publicising, within no time these babas build an ashram where people leave their brains outside the gate and get ‘so-called salvation’ with the divine blessings of the baba. As if moksha (cycle of rebirth) and nirvana are as instant as instant coffee.

Soon, people swarm like bees around the baba, making him ‘Guru number one’. It is not surprising as we humans are creatures with herd mentality and rush where everybody is rushing. This gives the so-called guru enough reasons to make the herd believe that by serving him (financially and even in some cases sexually), they are serving God. This is the reason why several brainwashed devotees of Bapu still believe he is framed while programmed devotees of the self-styled godman Singh are on an angry rampage after a court pronounced the controversial baba guilty of raping two of his followers. For them, these gurus are god and in their eyes, they cannot be wrong.

It is unfortunate how these self-styled godmen with their talent and marketing skills have turned people into brainwashed robots as they get ready to kill and be killed in the name of their guru. The deadly clashes that killed at least 30 and injured 200 people including security personnel in Panchkula, Haryana is an example of how hollow the teachings of these phony gurus are. They are, in reality, nothing more than hyped felonious crooks running an army of mafias to control and destabilise everything for their own selfish gains. Nevertheless, the eye-witnesses and the journalists covering the shady deals of both Bapu and Singh faced deadly consequences.

Another thing worth questioning is why these 21st century modern gurus are perched on top of the pyramid when they do not follow the basic requisite of a spiritual being. Singh, for instance, is the king of bling and gives some serious competition to Bollywood’s Bappi Lahiri, not just with his shiny clothes and dazzling jewellery, but also with his bizarre songs and dance moves.

While spirituality is all about simplicity, this so-called spiritual godman is renowned for flaunting more than Justin Bieber with his cringe videos, sports car, bikes and colourful dresses. I wonder why his brainwashed and myopic followers do not try to see this side of their guru before taking the law in their own hands and crying foul that their so-called guru is a victim of a conspiracy.

It is unfortunate that while these followers took the law in their hands for their pitaji (father) who has been sentenced for 20 years, none of the Dera members came to meet the injured. A resident of Dashmesh Nagar of Patialia, Mohit Kumar, spoke to the Hindustan Times and said,

“No one from the Dera has come to see my injured father (Baljinder Kumar, in his 50s). I, with some relatives, went to Chandigarh to claim the body of my brother. For my father, it will take another month to heal the bullet wounds.”

Kumar and his family are not alone in this. There are several others like him from weaker economic sections who continue to face horror after the riots. If only the blind followers weren’t brainwashed to believe a crook as their guru and God. What kind of authentic godman preaches his followers the art of violence?

Meanwhile, their pitaji who carried out a session of pitaji ki maafi (father’s forgiveness) was seen crying, “Mujhe maaf kar do (forgive me)” in the court. Pleading mercy, he sat on the floor and refused to leave the court until he was dragged out by force.

Nevertheless, Singh’s, oops I mean prisoner number 1997’s, sentence, like Bapu and Rampal’s, is beneficial for society. With these three phony babas in captive, let’s hope that people will now use their logic before leaving their brains outside the ashram (religious retreat) of any self-proclaimed guru or baba.