US-Pakistan-Afghanistan: The gloves are now off 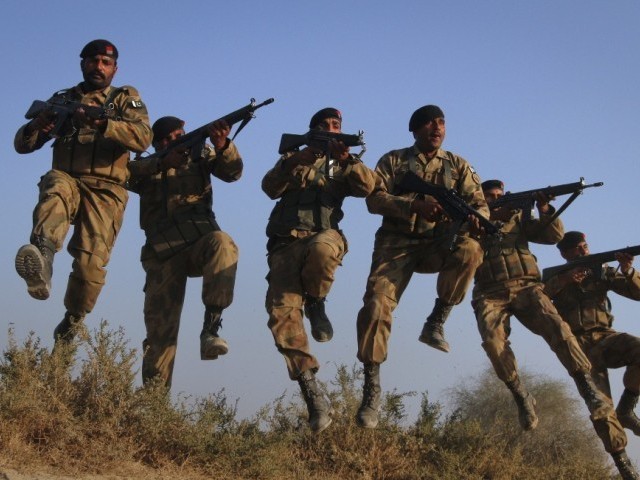 A clash erupted after the convoy came under attack at the Amin picket. PHOTO: REUTERS

Like millions of Americans, I watched President Donald Trump’s speech from my living room on August 21, 2017. It is the third time an American president has addressed our nation on Afghanistan, now the longest war in American history.

To those of us familiar with the region, the speech was business as usual, with a few notable changes. But for those Americans with loved ones in Pakistan, the president’s speech was a plainspoken warning – fall in line Pakistan, or face the consequences. Taking the speech to its furthest extrapolation, without change, Pakistan will soon face US sanctions.

Certainly for Pakistan, clouds are gathering. The Trump administration has paused $350 million in military aid on the basis that Pakistan is not doing enough to combat domestic terrorism. Other measures not mentioned explicitly in the speech are also on the table. At the Council on Foreign Relations, Max Boot notes that the US is considering sanctioning individual Pakistani officials and pursuing a more liberal bombing campaign on Pakistani insurgents.

For the US, with President Trump in charge, famous for his abilities to delegate as an executive, the gloves are now off.

Trump committed to “expand authority for American armed forces to target the terrorists and criminal networks that sow violence and chaos throughout Afghanistan.”

In this commitment, the president is referring to the restrictions former president Barack Obama had placed on US forces. At the time, Obama was allowing US forces permission for only offensive airstrikes against transnational terrorist groups, including the Haqqani network and al Qaeda but not the Taliban itself unless US forces were under imminent threat.

With the gloves off, the Taliban could be directly targeted by US forces on the same basis as international terrorist groups, leading to an escalation of conflict and presumably some spillover onto Pakistani territory where the Taliban shelters.

As an American of Pakistani heritage, the US policy on Afghanistan fills me with despair. The real victors emerging from this endless conflict are the Taliban who can outlast any superpower for decades and will continue to do so.

Today, the Taliban control 11% of Afghanistan’s population and contest an additional 29% of Afghanistan. Furthermore, the lack of serious recognition of Pakistan’s loss of life in battling the Taliban – though briefly mentioned by the president – was overshadowed by accusations that Pakistan shelters the very terrorists that dismember its citizens. More sorrowful still is that there is indeed truth in this, however painful it is for us Pakistanis to admit.

As I listened to the speech here in New York, I thought of both the American soldiers I have treated with complications from their Afghan military tours and the Pakistani soldiers that I have toured with who have made enormous sacrifices against the same enemy – the Taliban. From all dimensions, whether I’m in my office in New York meeting American soldiers with post-traumatic stress disorders or in Malakand or the Swat Valley seeing the families of local villagers threatened with decimation by the Taliban, widowed by jihadism, or mourning sons lost to the clutches of predatory jihadist recuriters – I realise that there is so much human suffering for such little gain.

I cannot forget my brief days with the Pakistan Northwest Frontier Corpsmen (FC). Five years ago, I went to see Sabaoon in Malakand, Swat, a school facilitating the rehabilitation of former child Taliban operatives. The FC personnel protected me from the first moments of my journey until the last. I rode with them in a Chevrolet pickup with armed guards manning a machine gun on the roof to deter snipers.

As I spent my days with these soldiers and toured the facilities with the physicians who founded the program under the aegis of General Ashfaq Parvez Kayani, I learned about the lives of these men and their families. By the end of the first day, some of the soldiers came to seek out my medical advice for their own worries.

In each Pakistani soldier, I found bravery, sacrifice, tenderness and deep respect for their sense of duty. Whether their charge was to protect me for three days or to protect the region against the lethal Taliban for decades, their determination did not falter. Wherever we went, tiny children would stop playing and wave at us, aware that their freedom to play in the valley was owed to these valiant men.

It was these men that were the most disregarded by the American president’s speech. How can President Trump know the sacrifice of Pakistan’s soldiers when he hasn’t even been to the places I have seen? When he hasn’t travelled in a Chevrolet miles along the hairpin roads of the Hindu Kush on a precarious clutch? How can he know about the lives of the soldiers’ beautiful children whom they miss when they go on duty? President Trump, very much like former president Obama, does not have a connection to the region and will not. President Trump, bowing to America’s generals and America’s deep state, has zero incentive to connect to the region.

President George Bush was quite different. Though he launched the ill-fated war in reaction to 9/11, throughout his two presidencies, he maintained strong ties with Afghanistan and visited the country as well. Thus, he was able isolate the Taliban as the enemy and the people of Afghanistan as innocent.

For Pakistanis, there are a few choices ahead. The intellectual public and the rigorous press must campaign for a rejection of all extremism within Pakistan’s borders. That includes not only the rejection of terrorist operatives and their powerful networks but the rejection of spurious mob killings of minorities in the name of blasphemy. It means offering nationwide protection to minority places of worship, whether it is for the Shias, the Sufis, the Ahmadis, the Ismailis, the Christians, the Bahais, the Hindus or the animists. It means the adoption of the true ideals of Muhammad Ali Jinnah’s founding values – a nation where one’s creed and caste is not the business of the state and where every man and woman and child is free to safely worship in his temple or church or mosque. Pakistan must demonstrate that it has a willingness to live by these rules.

Alyssa Ayres, a foreign policy expert on South Asia observes with appropriate incredulity that only recently, Hafiz Saeed, the suspected mastermind of the 2008 Mumbai Bombings and leader of Lashkar-e-Taiba (LeT), a designated terror organisation on UN Sanctions lists, has registered as a political party named the Mili Muslim League. Despite these designations, and notwithstanding that the US listed a $10 million reward for information about him in 2012, he has been able to operate in Pakistan, barring his house arrest, unhindered. That an internationally recognised terrorist – also named by Afghanistan’s President Ashraf Ghani as one of the terrorist groups Afghanistan is fighting – can register with Pakistan’s Election Commission to compete in the 2018 national elections is a foul stain on Pakistan’s democracy. Such individuals must be excommunicated from Pakistani politics, not inducted to national profiles. These excommunications must be led by our own political leaders.

US legislators both in Congress and the executive branch have begun to demand that Pakistan acknowledges its policy of providing safe havens to terrorists. Two US secretaries of defence – Ashton Carter and James Mattis – have refused to certify that Pakistan is making adequate efforts to target the Haqqani network. These choices are causing damage to the region but also severe damage to Pakistan’s own structures of democracy as well as its international reputation. Pakistan’s choices are a fast track to international sanctions. Trump’s rhetoric in his Afghanistan speech, no matter how painful, is only a natural trajectory of the experience of past US administrations.

When Pakistan unites in defence of the innocent and the vulnerable, in defence of the weak and the good, it will regain the moral high ground to take on extremists who do find safe harbour within this beautiful and deeply misunderstood nation.

Without question, Pakistan’s soldiers, airmen and women are among the bravest in the world. They have also given a far greater sacrifice to the jihadist threat from Islamism – radical Islam – in the form of the Taliban and lately the Islamic State (IS), than any other nation. And their bravery threatens the Taliban greatly – who can forget the devastating assault that claimed the lives of 140 children at the Army Public School (APS) in Peshawar which was vengeance for Pakistan’s ongoing war with the Taliban?

While Pakistan’s soldiers will continue this devastating war for the protection of the nation, it is time Pakistan’s citizenry followed suit and reject all forms of extremism from within. We must do this as neighbours, as newspaper editors, as columnists, as filmmakers, and as politicians.

Too much appeasement of hardline extremists has led to an increasing exploitation of Pakistan as a nation where extremists are welcome. That must change and the motivation to change it has never been greater.