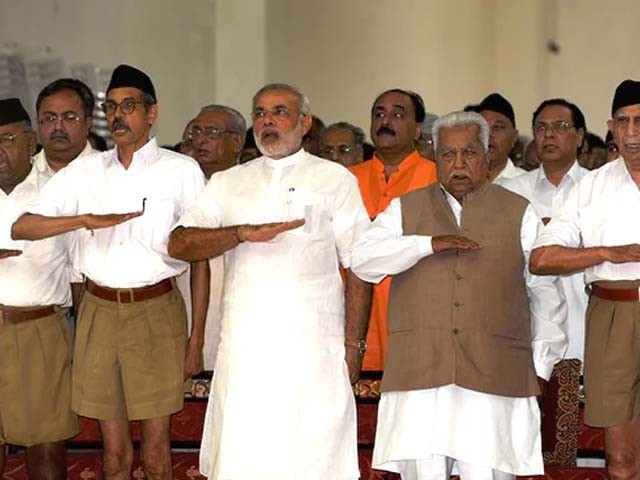 In this photograph taken in September 2009, Narenda Modi, then chief minister of the western Indian state of Gujarat, attends a Rashtriya Swayamsevak Sangh (RSS) gathering at Tria Mandir in Adalaj, near Ahmedabad. PHOTO: AFP

A couple of weeks back, India celebrated the 70th anniversary of its independence from the British colonial rule. For seven decades, India has remained the world’s most populous democracy. It is almost the only country in the developing world that has steadfastly adhered to peaceful transition of power through electoral means.

In the past two decades, India has also been seen as a democratic alternative to communist China in the emerging global power configuration.

However, after 40 months of Narendra Modi being the prime minister of India, there are now serious doubts over the regular continuation of the democratic arrangement in India. Indian democracy had primarily worked for so long because of its avoidance of a single religion, single culture or single language, and continued the struggle to achieve equality among its citizens and the establishment of the rule of law.

The major reason for concern for democratic India is PM Modi himself, a former pracharak (a person appointed to propagate a cause) of RSS. Jawaharlal Nehru, in 1947, had cautioned the chief ministers of India,

“We have a great deal of evidence to show that the RSS is an organisation which is in the nature of a private army and which is definitely proceeding on the strictest Nazi lines.”

Modi has trained in the Hindutva philosophy of the RSS, the same RSS which has grown multifold in size and influence and is his primary supporter and promoter.

Many were expecting PM Modi to change his Hindutva stance after becoming the prime minister of a religiously and ethnically divided country like India, but RSS’s teachings seem to be more powerful than the country’s constitution.

Modi is completing 40 months of his present tenure as the prime minister of India. During this period, India has witnessed Modi’s utter disregard for human rights and the crude use of state machinery to manipulate election results and to censor critics. He has tried all the tricks to undermine the independence and power of the judiciary and other critical institutions. He has also used both constitutional means and Hindutva foot soldiers to suppress religious freedom.

However, no one can claim to be surprised at Modi’s non-democratic authoritarian tendencies as the PM.

In the 2014 general election, Bharatiya Janata Party (BJP) had projected him as a decisive and strong leader. Even BJP MP Paresh Rawal had asserted before the election that,

“A benevolent dictatorship is what India needs.”

The opposition always had that fear.

National Conference President Farooq Abdullah had warned before the country went to the polls,

“If Modi becomes the prime minister, India will become a dictatorial nation and only God knows who will survive that (his rule).”

Modi as the PM of India has fared terribly when it comes to upholding the country’s democratic and secular ethos, where all religious and ethnic groups are constitutionally equal. Violent attacks against Muslims by Hindutva mobs on suspicions of possession or consumption of beef have become quite regular. Minority communities are living in a virtual seize. Academic freedom has been seriously curtailed and student activism brutally suppressed. History books are being rewritten and voodoo science is being promoted. Highly incompetent Hindu right-wing sympathisers have been recruited to run the top educational and cultural institutions of the country. More than 20,000 civil society groups have been denied international funding support.

When critics of Modi describe him as a serious threat to Indian democracy, his highly vocal supporters in the media and the intelligentsia continues to counter it by saying Modi is exactly what India needs and will lead the country to greatness. To them, Modi is unfairly maligned and misunderstood and the possibility of him turning out to be an authoritarian dictator is a myth.

To negate the apprehension of Modi becoming a dictator, the usual argument peddled by his supporters is that India is a democracy and that Modi has come to power through one of the largest democratic exercises in history.

However, the open manipulation of the election results in Goa and Manipur and the blatant use of state machinery and money power in the Rajya Sabha election in Gujarat clearly show Modi’s disdain for basic etiquettes in a democracy.

We should not forget what Plato had once said,

“Dictatorship naturally arises out of democracy.”

It is a no-brainer to see that an elected leader can very well become a despot even if he or she has come to power though elections.

In some cases, autocrats come to capture power through violent means, but it is also very much possible that an elected government can evolve as a dictatorial one depending upon the person in charge and the quality of the opposition.

The list of regularly elected dictators is very long, including present ones like Robert Mugabe, Recep Tayyip Erdogan and Vladmir Putin. A divided society like India, with unusually high aspirations, can fail to discipline its appetite for the sake of common good and thus some electoral outcomes can be quite problematic.

Dictatorship simply implies that the government rests on a single person. A regime, whether democratic or dictatorial, can surely make good or bad decisions. However, when an autocrat takes a decision, it might be bold and efficient, but it lacks checks and balances and suffers from the absence of a safety net.

When a government, as we have been increasingly witnessing in India, becomes dependent on the ‘wise’ choices of a sole individual to mirror the interests of the whole country, it is a dangerous proposition.

Modi’s abrupt decision last year to invalidate 86% of the cash in circulation has caused immense hardship and terrible pain to millions of Indians, mostly those from the poorer sections of the society. It has resulted in no benefit for the nation or its economy.

As Amartya Sen described the idea and implementation of the note ban by Modi, it was a “despotic action” and “only an authoritarian government can calmly cause such misery to the people”.

A rubber stamp has now been placed at Rashtrapati Bhavan. Modi’s total control over his government and the ruling party, as well as the absence of an effective parliamentary opposition, provides a fertile setting for an authoritarian dictatorship to gain strength in India.

Since the 70s, the world had witnessed the ‘third wave’ of democratisation. The collapse of the Soviet Union had led many to believe that democracy has become the only game in town. But with the arrival of the new century, the global march towards democratisation has suffered a halt. In the last 17 years, at least 25 democracies in the world have taken a backward trajectory. Two major casualties of this on-going global democratic recession are Russia and Turkey.

In India’s neighbourhood, Bangladesh and Maldives have joined this new trend. India, where democracy had taken root braving impossible odds, is unfortunately on the verge of a democratic collapse.

Not even after 70 years can democracy in India be taken for granted.

The author is a Professor of Peace and Conflict Research at Uppsala University, Sweden. He tweets as @ashoswai (twitter.com/ashoswai)

India must remember that Balochistan is not Bangladesh