It was desperation that won in the end 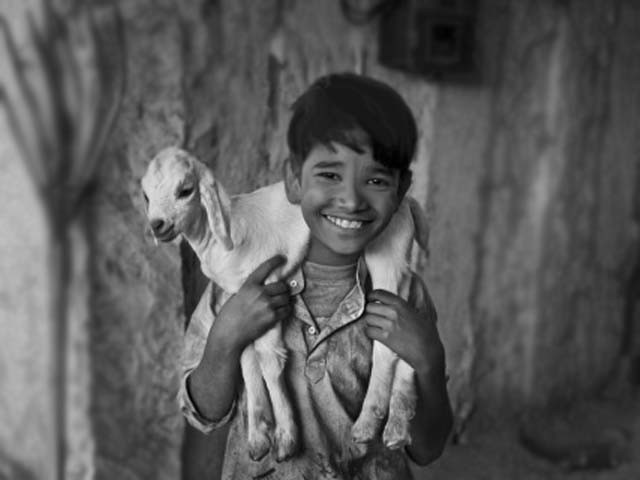 He would wake up early to feed it and spent every waking minute with the animal. PHOTO: TUMBLR

(This charpayi makes too much noise… It will wake Bakhtu up.)

Allah Ditta thought as he struggled to get up while making as little noise as possible.

He glanced back at his sleeping son. He bowed down and planted a kiss upon his brow. Rushing out, he turned down his wife’s offer for breakfast,

(What if Bakhtu wakes up? I will eat something there).

These past few weeks had been nothing short of an ordeal for Allah Ditta. It was still dark out as he stepped out of the house. Only last week, his five-year old had besieged him to bring home a bakra (goat). Eidul Azha was just around the corner and Bakhtu had seen people in the neighbourhood bringing home animals for the sacrifice.

Looking upon his child’s face lovingly, Allah Ditta’s eyes welled up. Allah blessed me enough to make me a father but not enough to be a provider, he thought as he avoided his son’s gaze. After that, each passing minute had become a living hell for him.

(May Allah never make anyone a poor father, not even an enemy.)

Ever since Bakhtu had expressed this desire, Allah Ditta spent as little time at home as possible. Leaving before the crack of dawn and returning only after he knew his wife would have put Bakhtu to bed, Allah Ditta had felt entrapped in a cruel game of hide and seek with his own son. His wife had tried distracting their son with new toys and sweets and sometimes even a light scolding but that enraged Allah Ditta.

(I have prayed and prayed for the birth of my son… Don’t you dare raise your hand on him!)

Bakhtu was their only child and Allah Ditta’s biggest weakness. He worked for a fruit vendor in the big city bazaar. He brought whatever little he earned to his wife every day which was spent on their daily essentials. There was never enough left to save for the future.

(How can I think of the Eidul Azha sacrifice? Even two meals a day seem difficult to obtain.)

Allah Ditta rolled his bicycle down the street.

The sound of the Azaan (call to prayer) from the nearby Masjid shook Allah Ditta from his musing. He mounted the bicycle and hurried to work.

It was almost noon when Allah Ditta finally took a break. Asking someone to take his place at the fruit stall, he walked slowly to the public bathrooms in the corner of the bazaar. Washing off the dirt and sweat from his face, he sat down, dejected and hopeless in the corner. His friend Sajid from the next stall walked over to him.

(What is wrong, Dittay? Why is your face so pale? Why are you worried?)

Allah Ditta told him everything. The two sat together in the corner, talking for quite some time. That night when he cycled home, Sajid’s voice rang in his ears.

(Even one day’s earnings shall be enough, they’ll be doubled…)

But it was wrong. How could he use that money to buy an animal for a religious sacrifice? Finally, he reached home. Conscious that Bakhtu might still be awake, he entered the house quietly. Allah Ditta spent that night quite restlessly. Sajid’s words rang in his ears.

(God knows your intentions. You’re doing this for a good cause. God will forgive you.)

His urgings had convinced Ditta to some extent. As he turned to his side of the charpayi, Bakhtu squirmed in his sleep. Patting him lovingly, Allah Ditta tried to put him to sleep. But Bakhtu opened his eyes. Looking at his father he said,

The question hit Allah Ditta in the face like a slap. Startled, he looked at Bakhtu and said,

(Sheeday did… his father has brought a goat for him. He says your father is poor… he will not bring a goat for you.)

Hearing these words from his only child plunged him deep into an abyss of paternal helplessness. He looked deep into his son’s eyes. What stared back at him was expectancy, longing and hope. But most of all, a child’s blind faith that his father will provide, no matter what and thus, a decision was made. It was desperation that won in the end.

That week, Allah Ditta gambled for the first time. His day’s earnings were doubled. Confident that his problem would be solved now, he returned home. Wary of his dubious demeanour, his wife inquired as to why he got so late. Shrugging it off nonchalantly, he sat down by the stove and ate dinner. Allah Ditta slept soundly that night, completely oblivious to the reality of what he had done.

They say all remains well till the money pours in. The next sitting also turned out to be quite lucrative for Allah Ditta. He started learning the rules but his fortunes smiled on him and he kept winning. Fate, however, is a fickle friend.

A week before Eid, Allah Ditta took Bakhtu to the nearest cattle market. They brought home a healthy goat with white fluffy hair and black ears. Bakhtu named it Raja. He was beside himself with joy. He would wake up early to feed it and spent every waking minute with the animal. Allah Ditta also took them out for a stroll where he watched lovingly as his beloved son doted over the animal.

“Rupayya na hovay tay banday nu sachi khushi nai mil sakdi,” he pondered over the possibility of keeping this option as a permanent source of income.

As Eid day came near, Allah Ditta took his wife and son shopping too. Never before had he seen them so glad to buy new things and his heart filled with unbridled joy.

That night, Allah Ditta sat down with his group again but something happened that had not happened to him until now – he lost. Frustrated, he put more money in and ended up losing that too. His head started spinning as after every game, his winnings disappeared in front of his eyes. That night, he returned home in a foul mood and an empty pocket. He even yelled at Bakhtu for playing too loudly with Raja. He went to bed early without eating anything.

When he finally fell asleep, his dreams were fraught with twisted demons and hell fires. He woke up to the cries of his son and wife the next morning.

(Ditta somebody stole the goat)

Bakhtu sat on the floor wailing loudly. Perplexed, Allah Ditta ran around the house, the street and the entire neighbourhood but to no gain. Raja was nowhere to be found. Dejection overtook him. “Who could be as lowly a thief to have stolen an animal meant for a sacred sacrifice,” he thought to himself. He sat on the street corner and reflected upon his life.

Someone had stolen the animal he bought for Eidul Azha with the money that he had won in an illegal bet. But had he really bought it to fulfil the spirit of sacrifice? His means of acquiring that money were no doubt quite illicit but the bigger issue here was the reason behind this purchase. It was not meant for any religious practice rather it was merely the fulfilment of his son’s desire. As he sat there, empty-handed and broken, Allah Ditta represented a major chunk of our society. He represents all the desperate fathers going to extreme lengths to buy a sizeable animal so that their children can happily show them off to their friends.

Many Allah Dittas live and die at every Eid and every occasion and what kills them is not any weapon but their unfulfilled desires, their starving children, their shabby homes, their callous hands that labour night and day to earn a meal. Can we save such Allah Dittas and their Bakhtus? Can we, in the spirit of sacrifice, do more for this faction of our society which are less fortunate but surely not any less human?