Dolled up to say goodbye 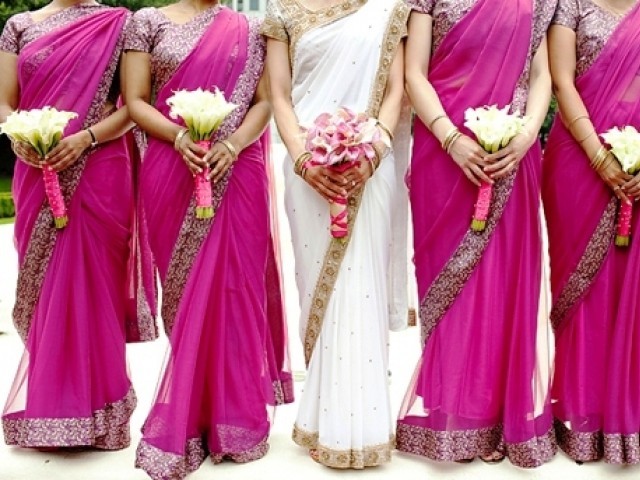 Nothing will hit us more than the prospect of leaving school. We haven’t even sat our AS levels, but we can already feel the pinch. And no event sums this up more than the end of year farewell.

Whether your school farewell takes place in a fancy hotel, or whether it consists of you passing around biscuits in the science labs, whether it’s for the Matric, O’ Level, Inter and A’ Level, the fact that you will be this dolled up to say goodbye must strike a chord somewhere.

Hence this conversation in Physics class:

“Do you think orange would be too much?”

“Like are we talking fanta orange or mendhi orange?”

“No no, more like…tomato orange, but you know, not that bright.”

Another girl slipped into the vacant seat next to mine, clearly miserable.

Bechari, someone sympathetically said. “Don’t worry, you can always wear what you wore last year,” another one piped up. To that we all turned in unison and stared. Um, no.

Don’t dismiss the importance of clothes for the farewell. Recently, I met up with a cousin at a family wedding. Her school and mine are on the opposite edges of the city, but she faced the same problems.

“We tried to keep a black and white theme last year. But everyone showed up in rang bareelay clothes, full purple jamawar and golden dupattay, it was pathetic yaar,” she said, moodily stabbing at her plate of shaadi biryani.

That’s something a lot of people overlook – shalwar kameezes.

You say ‘party’ and ‘co-ed school’ in one sentence and off people go, imagining prom dresses and boy-girl dances. God Forbid! You cry. The reality is a bit different. It’s shalwar kameezes we wear, (shalwar kameezes being a vague term for flowy  A-lines with chooridars and four-inch heels.) Some adventurous schools opt for saris too.

Yet eastern clothes and party themes don’t mix well. Take the Lady Gaga theme one year: ever seen a girl with a tikka and stacks of chooriyan dancing to Pokerface?

For some, it’s all a bit too misogynistic. I don’t see them forcing the boys to wear sherwanis and khussas, someone grumbled.

But our teachers could barely contain their excitement.

“Beti, you look so pretty!” (With your long pants and covered sleeves…)

“Beta, how handsome you look!” (With your shirt tucked in and face finally shaved…)

We were amused at the way they all sat in the corner, watching us “to make sure we don’t do shady things,” as someone explained. “Big Brother is watching,” another whispered.

Or maybe they were just reliving it, the way some of us were turning sentimental as the hours ticked by and the music grew louder. “It’s all over,” a friend sobbed, clutching me, until I reminded her we weren’t going anywhere and still had one year left.

But farewells are like that. They’re an opportunity to weep and still come off looking good. In reality all the goodbyes have already been said, at school events before and at plans you’ve kept with friends.

Right now it’s about fixing your hair and posing for the grade picture.

The crying can come later.