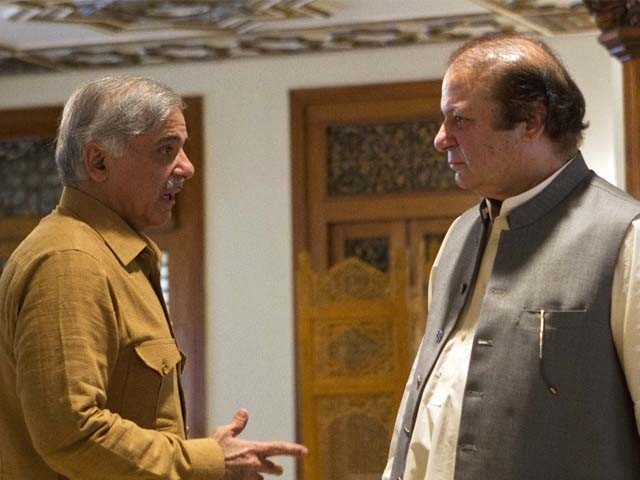 One would usually frown upon the vivisection of a family’s domestic issues on a public forum. But the sheer influence of the Sharif family’s private affairs on the national political landscape renders such an analysis as a necessary evil.

In 2015, Hamza Shehbaz attended a wedding ceremony where he spent most of his time sulking in a far corner of the quaintly decorated arena, scarcely mingling with fellow attendees and keeping a low profile. At the same event, a frustrated Begum Nusrat Shehbaz was heard loudly rebuking one of the attendees, after being repeatedly asked to participate in a family portrait being shot on the stage.

The said affair happened to be the wedding ceremony of the former prime minister’s (PM) daughter-in-law. The shocking public manifestation of a rift between the two sections of the first family may have served as a warning of the cracks that seem to be appearing in the political arena, catalysed by Nawaz Sharif’s disqualification last month.

First, an eager Shehbaz Sharif was denied his long coveted move to the centre when Shahid Khaqan Abbasi was confirmed as staying on till the 2018 elections. Kulsoom Nawaz now stands to contest elections in the former PM’s vacant NA-120 seat. Shehbaz was then again snubbed for the presidency of the party, which was given to the Baloch Senator Yaqoob Nasar. Finally, this week, the ever ubiquitous Hamza, who has become a doyen of constituency politics in the past decade and was set to run the NA-120 campaign, was relieved of his duties and no longer remains in the country.

As Nawaz sees his political fortunes further dwindle owing to the plethora of the National Accountability Bureau (NAB) references he faces, the question of succession seems to be propelling his mind. Let Shehbaz become PM now whilst one of his men in Punjab is appointed as the chief minister (CM) and the entire balance of power shifts to the other wing of the family. What is more worrying are the charges against his heir apparent Maryam Nawaz. Let the balance shift now whilst his domain seems down and buried and he may never be able to reclaim it if either him or his daughter were to survive the legal juggernaut they face.

Hence, not only is Shehbaz being precluded from becoming PM, the refusal to appoint him as president as was done in 2008 clearly reflects the widening trust deficit between the two brothers. A trust deficit that can further dent the Pakistan Muslim League-Nawaz (PML-N) going into next year’s polls.

Firstly, Hamza’s removal from the NA-120 campaign could prove calamitous for the seemingly confident Nawaz right now. Constituency politics, especially within a traditional N-league seat in Punjab, centres on the co-opting and facilitation of certain local fixers that in turn use their influence within the constituency to garner votes for the candidate.

Having managed local affairs within Punjab and specially Lahore over the past four years, Hamza currently holds the key to these fixers. Of course, Nawaz is currently buoyant after the emphatic reception he received on his return home a week ago and sees enough popular support within the constituency to drive home a comprehensive win even without Hamza’s networking. However, the inactivation of even a few of the said power brokers within the elections can lead to an embarrassingly meagre victory margin for Kulsoom or even worse, a defeat. How such a scenario would affect the already injured Nawaz is a self-addressing query.

Furthermore, whilst Nawaz remains the popular leader, Shehbaz and Hamza’s hold on Punjab’s power politics is considered undeniable. Add to the equation the visible unease with which a section of PML-N ministers, led by Chaudary Nisar Ali Khan, currently view the confrontational rhetoric which Nawaz seems to be peddling against state institutions since his disqualification.

Clearly, a large minority of PML-N ticket holders, especially those known to have a habit of changing political allegiances according to expediency, will be reluctant to enter an election campaign which pits them directly against the establishment and draws the ire of the infamous political wing of the Inter-Services Intelligence (ISI). This leaves Nawaz vulnerable to the emergence of a deadly forward bloc in the run up to the 2018 elections.

Of course, Shehbaz’s high dudgeon at the treatment he has received at the hands of his elder brother may not be enough to openly propel him into rebellion. Most of those who are close to the CM swear by his loyalty towards Nawaz, which has been repeatedly evident throughout the past 30 years.

Nawaz also seems to have realised, to some extent, the dangers of leaving his younger brother out in the cold. Reports suggest that Shehbaz will after all be appointed president of the party come next month. However, this will serve as a small consolation to the visible marginalisation of the Punjab premier in matters of utmost important such as the prevailing politician strategy after Nawaz’s disqualification (which Shehbaz has openly criticised) and the picking of the new premier in the centre.

Nawaz will have to concede a lot more to his brother if he is to truly attenuate his chagrin. This is imperative for the former PM, as open rebellion aside, even Shehbaz’s indifference towards a PML-N election campaign and tacit support for a forward bloc can prove disastrous for the N-league’s electoral fortunes.

Nawaz thus seems to be blindly preoccupied with the fight for survival and making decisions out of fear on the whims of imprudent advisors. Eventually, his own confrontational proclivities within and outside of his party may lead to an unfortunate demise, aptly encapsulating Munir Niazi’s famous couplet,

(The townsfolk were indeed cruel, but we also had a bit of a death wish).