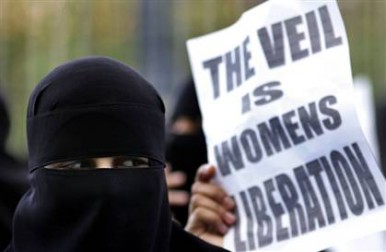 Finally, French legislators have passed the bill banning the female veil in public, which covers the whole face and body. If passed by the Senate in September it will become a law. The breaking of this law will result in a fine and if men force their wives to wear full veils they will face up to one year in prison and a fine. As expected the proposed law has sparked ‘the great burqa debate’ among Muslim and non-Muslims circles all over again. Many Muslims, especially those living in France term it a violation of their basic civil rights.

It is interesting to know that French law prohibits census on the basis of religious faith so an accurate number of Muslims is not known. However, despite tougher immigration laws the Muslim population is reported to be increasing . One of the main tasks of French authorities is to successfully assimilate tminority immigrants in to French society. The use of full body and face covering by Muslim women was considered a failure on the part of Muslim immigrants to absorb in the pluralistic French society. Minimal or no assimilation on the part of immigrants whether religious or economic, increases the chance of ideological clash which can lead to a dysfunctional society.

Let’s set aside our sensitivities for a while and look at the matter from the French point of view. The French government stands on the principle of secularism. French laws of 1905 require the separation of church and state which means no religious group is funded by or supported by the state. This law holds special significance given the volatile history of France where the clash between puritanical and liberal groups was common and caused a deep divide within society. The French government, according to its constitution, can make any law to uphold and maintain secularism.

French primary and secondary public schools and civil servants are expected to operate in an environment of neutral of religion and politics. But according to laws set in 1905 the public is allowed freedom of religion. Some people argue that this law primarily deals with school buildings, curriculum and teachers instead of students. But it could be argued that students also form an integral part of society and if the majority of students in school aren’t comfortable regarding the Muslim veil then as a democratic nation they have the right to voice their concern and take steps towards bringing a change. It was this ideology that spurred a ban on Muslims headscarves among other religious and political symbols – such as Jewish kippah, Sikh turban and large crucifixes in public schools in 2003.

The recent ban on the face covering veil should be worrying only if it triggers a series of bans. As long as Muslims are allowed to maintain mosques and practice and preach religion and women are allowed to use headscarf with faces open, their case, if they take it to the Europeans Court of Human Rights, would not have strong grounds. That is because according to French interpretation an individual is free to practice religion as long as he/she doesn’t deviate from the secular values of the state.

Is it tricky? Actually, no. It is easier to understand if we bring the situation to our country. Let’s take an example of violations of basic civil rights in Pakistan. Ahmadis by law are not allowed to practice or preach their faith publicly. They can’t call themselves Muslims or call their places of worship mosques. The state seized their basic right of freedom of religion. The comparison of this situation with the burqa ban makes the French appear totally justified in attempting to preserve their constitutional tradition – because in a democratic setup decisions are made according to the will of majority.

The ban on the veil also reminds me of an incident in the Peshawar High Court where Chief Justice, Tariq Pervaiz, ordered female lawyers not to wear veil in the courtroom. He reasoned that female lawyers could neither be identified nor perform their duties properly. This remark by the chief justice did not go down well in many circles. In an Islamic countries including Pakistan criticism of such a remark is understandable. The constitution ensures the Islamic way of life for Muslims and the law doesn’t prohibit a woman from taking a veil. If we study the case of French burqa ban in the perspective of our country it would be easier for us to understand the intricacies and workings of French Constitution.